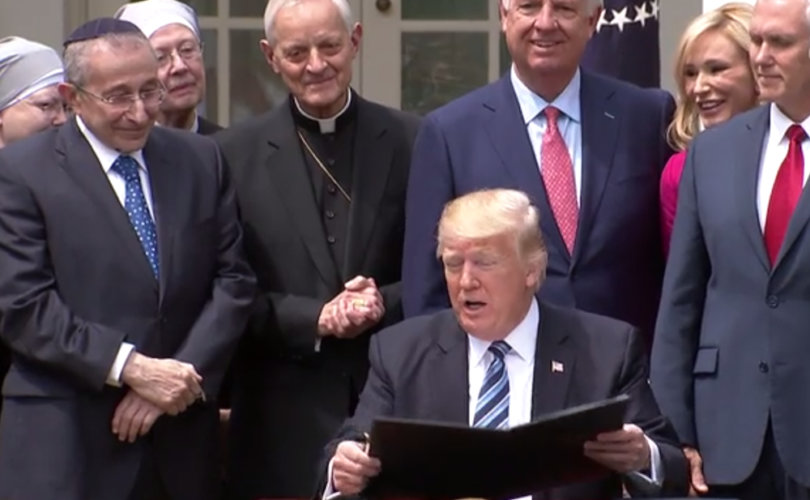 WASHINGTON, D.C., May 8, 2017 (LifeSiteNews) – Conservative groups have mixed feelings about President Trump's religious liberty executive order. Some claim socially liberal “Ivanka and Jared won” because it's weaker than the original leaked draft, and others have praised the order as a historic step in the right direction.

The left-wing American Civil Liberties Union (ACLU) is of the opinion that the order doesn't contain much they need to worry about.

The “executive order signing was an elaborate photo-op with no discernible policy outcome,” ACLU Executive Director Anthony Romero said in a statement.

“The directive to federal agencies to explore religious-based exceptions to healthcare does cue up a potential future battle, but as of now, the status quo has not changed,” said Romero. “What President Trump did … was merely provide a faux sop to religious conservatives and kick the can down the road on religious exemptions on reproductive healthcare services.”

The executive order, which is on “Promoting Free Speech and Religious Liberty,” grants churches more freedom to speak about political issues and elections. It also tells federal agencies like the Department of Health and Human Services to “consider issuing amended regulations, consistent with applicable law, to address conscience-based objections to the preventive-care mandate” that requires religious employers like the Little Sisters of the Poor to participate in the provision of contraceptives.

“It shall be the policy of the executive branch to vigorously enforce federal law's robust protections for religious freedom,” the executive order declares.

Questions about the Johnson Amendment
The executive order instructs the government to ensure that “adverse action,” such as retaliation from the IRS, isn't taken against churches or individuals associated with them for preaching “about moral or political issues from a religious perspective.”

“An executive order cannot repeal a statute, and legal restrictions on political activity by churches are statutory,” wrote French. The Johnson Amendment must be either overturned in court or by repealing the statute, he argued.

“President Trump’s prior assertion that he wished to 'totally destroy' the Johnson Amendment with this order has proven to be a textbook case of 'fake news,'” Romero alleged.

“Americans cannot rely on the discretion of IRS agents, some of whom have abused that discretion for years to silence pastors and intrude into America’s pulpits,” said Gregory S. Baylor, senior counsel at Alliance Defending Freedom. He echoed French's point that there's nothing “to prevent a future, hostile administration from wielding its power to penalize any church who dares exercise its constitutionally protected freedoms in a manner that displeases those in authority.”

“A legislative problem like the Johnson Amendment demands a legislative solution like the Free Speech Fairness Act,” said Baylor.

'Betrayal' or the first step toward restoring religious liberty?

Perhaps the most-criticized element of the executive order is its lack of specific protections for Americans who live their beliefs that marriage is between a man and a woman.

The leaked draft promised to protect people who believe, speak, act, or decline to act based on their beliefs that marriage is between a man and a woman and “sexual relations are properly reserved for such a marriage.” It would have protected those who believe “male and female and their equivalents refer to an individual’s immutable biological sex as objectively determined by anatomy, physiology, or genetics at or before birth, and that human life begins at conception and merits protection at all stages of life.”

The draft also contained language guaranteeing religious freedom for all “when providing social services, education, or healthcare; earning a living, seeking a job, or employing others; receiving government grants or contracts; or otherwise participating in the marketplace, the public square, or interfacing with federal, state or local governments.”

“The order is just as notable for what it omits as for what it reportedly includes,” wrote French. He noted the “threat” of the Johnson Amendment “pales in comparison to the comprehensive assault on religious organizations on federally funded campuses, the threats to the religious freedom of Christian educational institutions, and the attack on the rights of conscience of dissenters from the new orthodoxies on marriage, the family, and even the definition of male and female.”

The executive order provides “no specific relief” to families like the Vander Boons in Michigan, Baylor said. The Vander Boons were threatened with the effective closure of their family-run business for placing religious materials in their breakroom. The materials said marriage is between a man and a woman. The U.S. Department of Agriculture deemed the materials “offensive” and asked the Vander Boons to permanently remove them.

Marriage, human sexuality, human life, and gender ideology aren't named at all in the final executive order. The original promised specific protection for people who believe in marriage and protecting all human beings, no matter young or old.

The order is “woefully inadequate” and “rather weak,” marriage scholar Ryan Anderson determined. The first leaked draft “protected the religious liberty rights of all Americans in very tailored ways that addressed the problems of today,” wrote Anderson.

Anderson's research and writing over the past few years has highlighted the increasing persecution of bakers, florists, and photographers who don't want to participate in same-sex “weddings” and ceremonies.

Religious freedom and pro-marriage advocate Professor Robert P. George of Princeton University tweeted that the executive order contains no substantial conscience protections. He suggested Ivanka Trump and Jared Kushner, who are known for supporting the LGBT cause, “won” and “we lost.”

The religious liberty executive order is meaningless. No substantive protections for conscience. A betrayal. Ivanka and Jared won. We lost. https://t.co/Xn94KWTKPX

Some pro-family advocates are more optimistic.

“President Trump's willingness to address the concerns of millions of religious women, like the Little Sisters of the Poor, instead of ignoring and minimizing their deeply held religious beliefs, as we saw during the previous administration, is a breath of fresh air that gives us great hope for the future,” said Penny Nance, president and CEO of Concerned Women for America. “There is more work to be done, for sure.  But President Trump has set a very different, and a very welcomed, tone in support of religious freedom that will surely bear much fruit in the future.”

Family Research Council President Tony Perkins was at the White House Rose Garden for the signing of the order.

“The President’s executive order is a clear reflection of his campaign promise to protect the religious freedoms of Americans,” said Perkins. It “starts the process of reversing the devastating trend set by the last administration to punish charities, pastors, family owned businesses and honest, hard-working people simply for living according to their faith.”

“We support President Trump in this effort, and we commit to working with his administration to strengthen religious freedom for all Americans, regardless of faith,” said Nance.

“The open season on Christians and other people of faith is coming to a close in America and we look forward to assisting the Trump administration in fully restoring America’s First Freedom,” Perkins concluded.

“I know that some of my fellow evangelicals are a bit uneasy because the executive order does not go far enough – but be patient,” Todd Starnes of FOX News wrote. “This is the first of several steps to protect religious liberty.”

And the ACLU plans on monitoring the order's outcome and possibly taking legal action.

“In the event that this order triggers any official government action at all, we will see Trump in court, again,” Romero threatened.