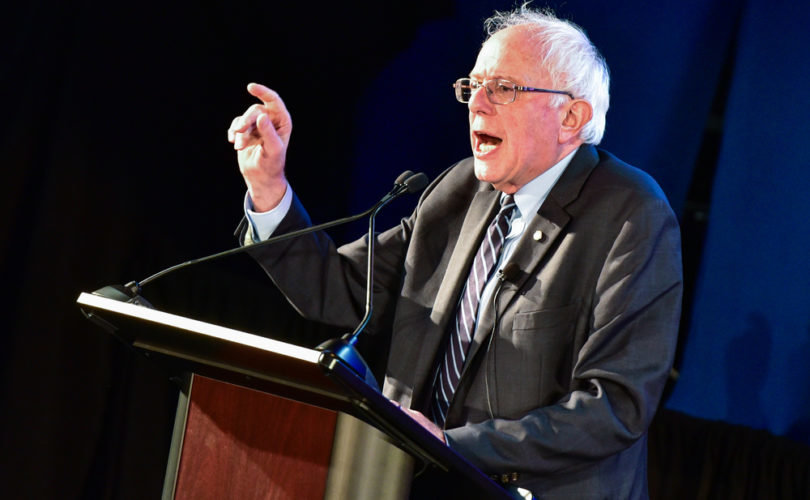 April 8, 2016 (LifeSiteNews) — A high profile flap developed today in the Vatican over the Pontifical Academy for Social Sciences' controversial decision to invite Bernie Sanders to address a conference in Rome while the pro-abortion Democratic presidential candidate is in a crucial moment of his campaign against Hillary Clinton.

The announcement of the invitation today comes just four days prior to a key primary contest in New York.

Though Sanders' views on life, marriage, and religious liberty diverge radically from those of Pope Francis, Sanders has tried to tie himself to Francis because of their similar messages on issues like the economy and climate.

The flap developed earlier in the day when the president of the Pontifical Academy, Professor Margaret Archer, lambasted Sanders, accusing him of committing a “monumental discourtesy” by publicizing the invite. However, the academy's chancellor, Bishop Marcelo Sanchez Sorondo, who outranks her, then contradicted Archer and defended the invitation.

Archer had told Bloomberg Politics, “Sanders made the first move, for the obvious reasons.”

But then Bishop Sorondo seemed to deny that in quotes to Reuters. “It was not that way,” he said. “I invited him with her [Archer’s] consensus,” he said.

Reuters reports that Sorondo showed them an invitation to Sanders that was dated March 30.

The April 15-16 conference marks the 25th anniversary of Pope John Paul II’s encyclical Centesimus Annus, which sets out the Church’s teaching on the social order and the place of economics within that order. In a press release, Vatican conference organizers called the conference in a “serious academic discussion” that would investigate how the Church can best engage with the world on social issues in the coming years and decades.

The internal dispute in the Vatican academy over Sanders’ invitation ignores the important question regarding why it agreed to invite Sanders to address the conference in the first place, just days before an important political contest. The question is compounded by the fact that Sanders holds a public position on abortion at extreme odds with Catholic belief in the sanctity of human life. Sanders believes in abortion-on-demand at any stage, for any reason, paid for by tax dollars.

In Centesimus Annus, John Paul II specifically mentions abortion as an attack against the “sources of life” that make a society flourish.

“Human ingenuity seems to be directed more towards limiting, suppressing or destroying the sources of life — including recourse to abortion, which unfortunately is so widespread in the world — than towards defending and opening up the possibilities of life,” the pope wrote wrote at that time. In the same encyclical, John Paul II also refers to abortion as a “scandal” that indicates a “crisis with democracies.”

Sanders told reporters that he was “delighted to have been invited by the Vatican to a meeting on restoring social justice and environmental sustainability to the world economy.”

Also scheduled to address the conference is professor Jeffrey Sachs, one of the world’s foremost proponents of population control as well as an abortion advocate.

That pro-abortion advocates — along with many others opposed to basic Catholic teaching — are invited to address a Vatican conference has become common place under the leadership of Pope Francis.

In fact, Margaret Archer herself — appointed by Pope Francis in 2014 to as president of the academy — slammed last year an American pro-life organization after it raised concerns about two leading abortion and population control proponents being given a prominent platform at a Vatican conference on climate change. “I am appointed by the Pope and responsible directly to him. I’m afraid that leaves you and your cohort out in the cold,” she told the pro-life organization.

PASS’s chancellor Monsignor Sorondo also has a history of criticizing conservative circles in the Catholic Church opposed to the current close collaboration between the Vatican and the United Nations concerning the question of purported climate change and the new Sustainable Development Goals.