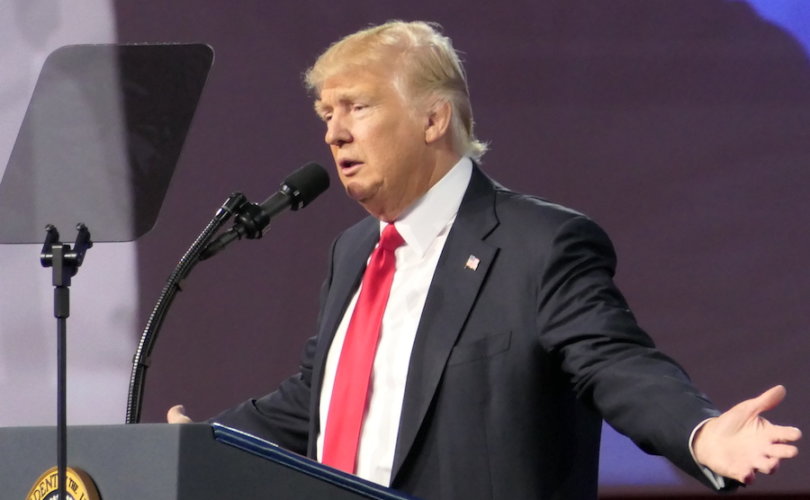 WASHINGTON, D.C., October 12, 2017 (LifeSiteNews) — The mainstream media pounced on President Donald Trump after he stated in announcing his support for the Pain-Capable Unborn Child Protection Act on October 2:

“The United States is currently out of the mainstream in the family of nations, in which only 7 out of 198 nations allow elective abortions after 20 weeks of pregnancy.”

The House approved the protective legislation the next day, but Trump was questioned about his charge that the U.S. is legislatively as abortion-permissive as China.

The Washington Post decided to fact check the president. Their conclusion? He is “backed by data.”

The infamous Roe v Wade Supreme Court decree arbitrarily segregated pregnancy into three 13-week “trimesters” based on the earliest gestational “viability” of the baby at about 26 weeks (the third “trimester”).

The nation's highest court declared that only after “viability” did states have the right to limit abortions, unless the mother's “health” was in jeopardy. However, Roe's accompanying decision, Doe v Bolton, defined “health” in such broad terms that abortion-on-demand was effectively legalized throughout all nine months of pregnancy.

The Charlotte Lozier Institute issued a report in 2014 that analyzed abortion laws in 198 countries and independent regions with populations of at least one million people.

More than 25 percent (59 countries) have legalized unrestricted abortion-on-demand, and almost three-fourths (139) require a stated reason from the mother for killing her child, such as poverty, or wanting to finish school.

Of the countries that have legalized elective abortion, only seven allow late-term abortions. Besides the United States, nations that permit the growing child to be aborted after 20 weeks are Canada, China, Netherlands, North Korea, Singapore, and Vietnam.

The Post checked these stats with another pro-abortion group's stats and concluded Trump was right.

The president's “statistic seemed dubious at first … But upon further digging, the data back up the claim,” the Post acknowledged. “Research from both sides of the reproductive rights debate confirm this figure.”

The U.S., along with Canada, China, North Korea, and Vietnam, have no national gestation limit to abortion but allow a baby to be terminated up to the day of birth.

All countries allow life-saving measures for the mother, even if such measures could indirectly result in the death of the child.

The Post applauded the president. “We award the elusive ‘Geppetto Checkmark’ when a factoid surprisingly turns out to be true, as in this case,” the newspaper conceded.

Planned Parenthood did not fare so well with the fact checkers. The abortion conglomerate's claim that 61 percent of Americans oppose a 20-week abortion ban was proved wrong.

Nevertheless, the nation's largest and most lucrative abortion provider continued to make the false claim in ads designed to influence voters even though it received “Two Pinocchios” for the lie.