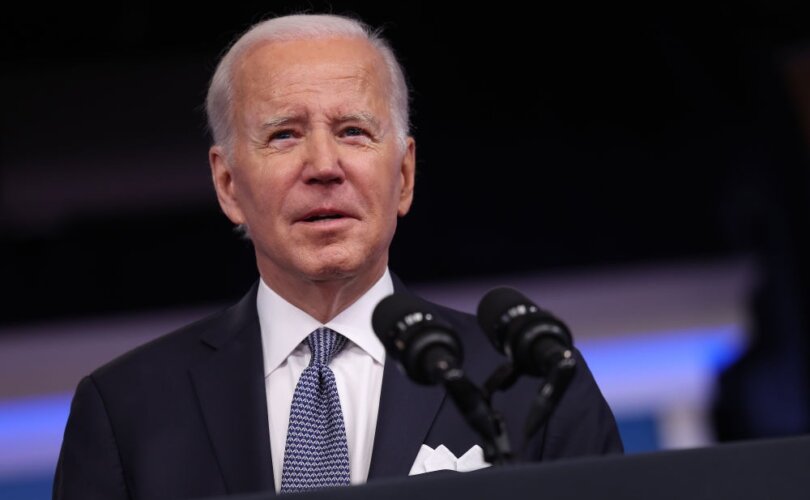 U.S. President Joe Biden takes questions from reporters on classified documents as he delivers remarks on the economy and inflation in the Eisenhower Executive Office Building on January 12, 2023 in Washington, DC. Biden spoke on his Administration's actions to lower the inflation rate, reduce gas prices and create manufacturing jobs for Americans. Photo by Kevin Dietsch/Getty Images

With an additional crop of documents appearing at Biden’s private residence this week and the DOJ appointing a special counsel to investigate the matter, the legacy media has generally sought to fly cover for the Democratic president by suggesting that stark differences separate the cases involving Biden and Trump.

While Trump’s case merits indictment and conviction, pundits have suggested, Biden’s is merely a matter of misplaced papers. But are the situations really that different?

Did Biden or Trump intend to illegally store the documents?

In sync with White House spokeswoman Karine Jean-Pierre, leftist outlets have leaned on Biden’s scripted claims that he was unaware the documents were being stored at his private office and his home.

“President Joe Biden said Tuesday that he did not know that government records from his time as vice president, which included some classified documents, had been taken to his private office after he had left public service,” CNN reported.

An MSNBC opinion writer used soft language in describing the incident, suggesting that Biden had “inappropriately,” rather than “illegally,” kept the classified materials.

“He was surprised to learn any records had been found there,” Jean-Pierre said during a January 11 press briefing. “He doesn’t know what was in them. He said this. I’m just repeating what the President has said.”

“[Biden] was surprised to learn about the records had been there…” pic.twitter.com/rH9O1NEvQV

However, attorney and George Washington University Law School professor Jonathan Turley argued that Biden’s “surprise” on hearing the documents had been dug up doesn’t change the fact that the “unlawful removal and possession” of classified materials is the same crime Trump allegedly committed.

For his part, Trump has long claimed that he had declassified the documents that were seized by the FBI, citing his presidential authority to do so.

While processes are typically followed when a president declassifies documents, he does have broad declassification authority, CBS noted. It’s unlikely, however, that Trump could have simply declassified the documents just “by thinking about it,” as he has argued.

Media outlets and Democrat leaders who spoke out concerning Trump’s possession of classified documents at his Palm Beach, Florida resort suggested that the matter posed a threat to national security.

Reuters reported that while in office “Trump sometimes shared information, regardless of its sensitivity … But it was at Mar-a-Lago, where well-heeled members and guests attended weddings and fundraising dinners and frolicked on a breezy ocean patio, that U.S. intelligence seemed especially at risk.”

“What we saw was Trump be so lax in security that he was having a sensitive meeting regarding a potential war topic where non-U.S. government personnel could observe and photograph,” said lawyer Mark Zaid, according to the report.

Pundits and politicians have suggested that the presence of classified documents at Mar-a-Lago, considering its allegedly “lax” security, could put the entire nation at risk.

“The legal arguments are compelling, but what is most striking are the facts outlining how the former president and his team knowingly put our national security at risk,” opined California Democratic Rep. Adam Schiff.

The government’s brief is devastating.

The legal arguments are compelling, but what is most striking are the facts outlining how the former president and his team knowingly put our national security at risk.

Here’s what stands out to me:

On Friday, the New York Post reported that the president’s scandal-ridden son Hunter “lived off and on at the Delaware home where classified documents from Joe Biden’s time as vice president were found last month — giving him unrestricted access to America’s secrets while he was addicted to drugs, hammering out shady foreign business deals and under federal investigation.”

Media coverage has also emphasized the alleged speed with which Biden’s attorneys handed over the documents to the National Archives, juxtaposing the president’s reputed transparency with what CNN characterized as Trump’s months of “stonewalling requests for the return of hundreds of pages of classified material.”

However, Biden’s attorneys reportedly found and turned over the materials just ahead of the midterm elections in November 2022, months before the public heard of it.

The White House has so far given no response as to why it wasn’t more forthcoming about the discovery until this week.

Trump has contended, meanwhile, that he had been complying with the FBI in relation to the documents and had even installed increased security at Mar-a-Lago after being asked to do so.

“The government could have had whatever they wanted, if we had it,” Trump said in a Truth Social post after the raid. “Everything was fine, better than most previous Presidents, and then, out of nowhere and with no warning, Mar-a-Lago was raided, at 6:30 in the morning, by VERY large numbers of agents, and even ‘safecrackers.’”

Another point of contention regarding the classified documents scandals hinges on the ways Biden and Trump reacted to the recovery of the materials.

“Biden, unlike Trump, never claimed the documents were his personal property or made fantastical claims they had been declassified by a private thought,” a CNN analyst remarked.

“As soon as his lawyers realized these documents were there, they did the right thing and immediately turned them over to the Archives,” the White House spokesperson said Wednesday.

However, Biden hasn’t been immune from making eyebrow-raising remarks.

During a press conference Thursday, Biden attempted to wave away concerns about the security of the documents by remarking that they were being kept in a locked garage next to his Corvette.

“By the way, my Corvette’s in a locked garage, OK? So, it’s not like they’re sitting out in the street,” the president told Fox News correspondent Peter Doocy.

Peter Doocy: “Classified materials, next to your Corvette? What were you thinking?”

Biden: “My Corvette is in a locked garage, okay?” pic.twitter.com/d6tsZQWLYL

It remains to be seen what will happen in the cases of both Trump and Biden’s allegedly illegal possession of classified documents.

U.S. Attorney General Merrick Garland announced Thursday that a special counsel will be tasked with investigating Biden with regard to the matter.

Conservatives have suggested that the controversy over Biden’s classified documents could scuttle any DOJ ambitions of prosecuting Trump for the same offense, LifeSiteNews previously noted.