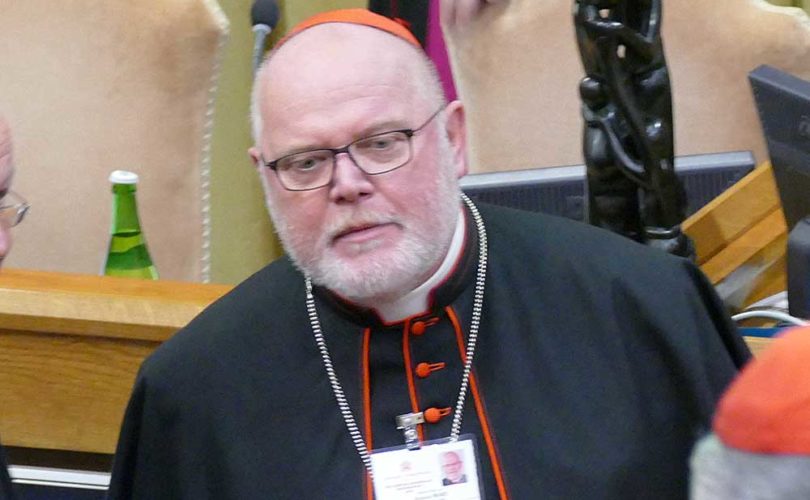 MUNICH, December 11, 2014 (LifeSite) – Some are asking why the German and indeed the world media relentlessly pursued the conservative “Bishop of Bling,” Bishop Franz-Peter Tebartz-van Elst, leading to his sacking in 2013 by Pope Francis, when liberal bishops who spend more are passed over in silence. Tebartz-van Elst was attacked over a €31 million re-build of a diocesan centre, when left-leaning Cardinal Reinhardt Marx, one of Pope Francis’s key advisors, spends €130 million – for starters – on a diocesan “service centre” in his diocese of Munich-Freising.

According to the German news service AZ, the Munich building was originally purchased by Marx’s predecessor for €86 million and was originally set to be renovated for €39.8 million. Work began in 2011, with an estimated cost of €42.15 million, nearly €10 million more than the “scandalous” final Limburg cost. Since then, expenses have spiraled up with no end in sight. Diocesan spokesman, Bernhard Keller, was quoted by the Munich daily paper, Abendzeitung, saying only, “It is a cost increase in line with market conditions.”

“Who says this is a luxury accommodation for Cardinal Reinhard Marx, is completely wrong,” Keller said. “It is a house of the meeting, the members of the cathedral chapter, employees of the Ordinariate, representatives of the laity councils, but also small groups of pilgrims should be available.”

Meanwhile Cardinal Marx himself lives rent-free either in a suite of rooms in the Holnstein Palace, the bishop’s residence, recently renovated at a cost of €8 million, or in a ten-room “guesthouse” in Rome estimated to be worth €9.7 million. He draws a bishops’ salary of about €11,500 per month and enjoys the use of late-model chauffeur-driven cars.

What was not widely reported in the secular press in the Limburg case was the fact that Bishop Tebartz van Elst was already well-known in the German Church for his “conservative” positions on various “hot-button” issues. He had been appointed by Pope Benedict XVI as a replacement for the well-known “liberal” bishop, Franz Kamphaus, who had earned the ire of the Vatican under John Paul II when he refused to stop issuing abortion certificates.

Tebartz van Elst, who also headed the German bishops’ marriage and family commission, was widely negatively covered in the German secular press after he disciplined one of his priests, Peter Kollas, who had conducted a “blessing” of two homosexual men. In 2007, Tebartz van Elst had issued a statement saying that all Catholics “have a duty to protest the legal recognition of homosexual partnerships.”

Bishop Tebartz van Elst was already unpopular with the secular press and his own liberal priests over his defence of Catholic moral teaching and his requirement that parishes strictly follow the liturgical rules at Sunday Mass. But it was a €5.5 million renovation of the diocesan centre that grew eventually to €31 million, and an allegation of a first-class ticket to India, that caught international attention, and the German media, quickly followed by the English and Italian secular press, smelled blood in the water.

As the media stirred up the controversy, Tebartz van Elst became the object of protests, and received little support from his brother bishops in the German episcopate. Although cleared of financial misconduct by Vatican investigators in September 2013, Bishop Tebartz van Elst was removed from his position by Pope Francis in October the same year after a meeting with Archbishop Robert Zollitsch, of Freiburg, past president of the German bishops’ conference and known as an ultra-liberal who supports homosexual civil unions and the ordination of women.

In the US, Canada and the UK, churches are funded through the voluntary donations of parishioners. Special projects, like fixing a roof or renovating a parish house, require special funding drives. But parish churches in Germany on Sunday mornings are almost empty, with most of the few remaining parishioners being in the latter half of their lives. According to German government statistics, the population of Germany is split about evenly between three groups, 30 per cent Protestant Evangelicals, 30 per cent Catholics and 30 per cent registered as “atheists” or “other.” But the Catholic Church is one of the wealthiest institutions in Europe and is Germany’s second-largest employer. So where does the astonishing wealth of the German Catholic Church come from?

About 70 per cent of Catholic Church revenue in Germany comes from the Church Tax, which accounted for about €5 billion in 2010. This does not include the investment revenue from the German Church’s extensive property holdings.

A person who does not wish to contribute to the upkeep of the Church must formally renounce his membership in the state-supported Church on his tax forms. In recent years, the general de-Christianisation of Germany and Europe as a whole has been blamed for a virtual exodus of German Catholics from the tax rolls.

The German Catholic bishops, despite their reputation as one of the most “liberal” Catholic episcopates in the world, have responded by declaring excommunicate anyone who opts out. In 2012 Archbishop Zollitsch told media “There must be consequences for people who distance themselves from the church by a public act.” He said, “Clearly, someone withdrawing from the Church can no longer take advantage of the system like someone who remains a member.”

“At issue, however, is the credibility of the Church’s sacramental nature. One cannot be half a member or only partly a member. Either one belongs and commits, or one renounces this,” Zollitsch said.

Zollitsch and his brother bishops in Germany, meanwhile, have repeatedly defied the Vatican’s insistence that those who are living in adulterous relationships after a civil divorce, must be refused Holy Communion. At October’s Extraordinary Synod of Bishops, the German bishops took the lead, with the Italian papal appointee Archbishop Bruno Forte, in pressing for the Church to “accept and value” the homosexual “orientation.”

The rate of formal withdrawals from the Church in Germany dropped between 2005 and 2013, the pontificate of Pope Benedict XVI, but have risen by over 50,000 since 2012. The 2014 report from the German Catholic bishops said, “Today it cannot be taken for granted that people belong to a church and that they practice their faith. This is shown in the many cases of people leaving the church. In 2013 178,805 people left the Catholic Church in Germany.”

Among those Catholics who have not formally withdrawn from the Church, attendance and belief is low and declining steadily. According to Pew Center research, about 1 in 5 German Catholics said they attend Mass every week, in accordance with Church teaching, in 2009/10. That had dropped to 16 per cent by 2011.

Presenting the annual report of the German Catholic Church in August this year, Cardinal Marx referred to the financial and sexual scandals of the German Church, and said that the Church must set about “good and convincing work to rebuild confidence at all levels.”

At the same time, another of Germany’s leading “liberal” prelates, Cardinal Karl Lehmann of Mainz, another former head of the German bishops’ conference and reportedly the mentor of Zollitsch, wrote of the “scandals and vexations” in the Church that are causing a general exodus from the Catholic Church.

“There’s no doubt these figures must make us think. We’ve obviously suffered a loss of trust and credibility which has rarely happened so violently,” Lehmann said in his diocesan newspaper.

Critics of the German bishops threats against Catholics opting out of the Church tax have accused them of the sin of simony, meaning the charging of fees for the sacraments. The 2012 decree against Church Tax dodgers included the statement that “without a sign of repentance before death, a religious burial can be refused.”

Fr. Alexander Lucie-Smith, a columnist for the Catholic Herald in the UK, noted the irony of the strong favor showed to his extremely wealthy German appointee prelates, including Cardinal Kasper, by Pope Francis. Germany’s pay-to-pray system, he said, surely goes against the trend that Francis is trying to promote of a “poor Church for the poor”.

“First of all, it is coercive. You have to pay, or else leave the Church. But surely everything in the religious sphere should be voluntary?” Fr. Lucie-Smith wrote. “Secondly, it uses the state to collect money for the Church. This brings Church and state into an uncomfortably close alliance, which can be damaging for the Church.

But Cardinal Marx remains high in the circles of power both in the Vatican and in Germany. Currently serving as the chairman of the German bishops’ conference, he is also a prominent member of Pope Francis’ so-called “gang of nine,” the inner cabinet the pope created to address “reform” of the Church, and has been put on the pope’s economic advisory board.

At the Synod, Marx placed himself as a lead voice in favor of paragraphs in the mid-term document calling for the Church to “accept and value” the homosexual “orientation”. At a Vatican press conference, Marx said, “Take the case of two homosexuals who have been living together for 35 years and taking care of each other, even in the last phases of their lives. How can I say that this has no value?”

Expanding, Marx continued, “Saying that the doctrine will never change is a restrictive view of things…The core of the Catholic church remains the Gospel, but have we discovered everything? This is what I doubt.”