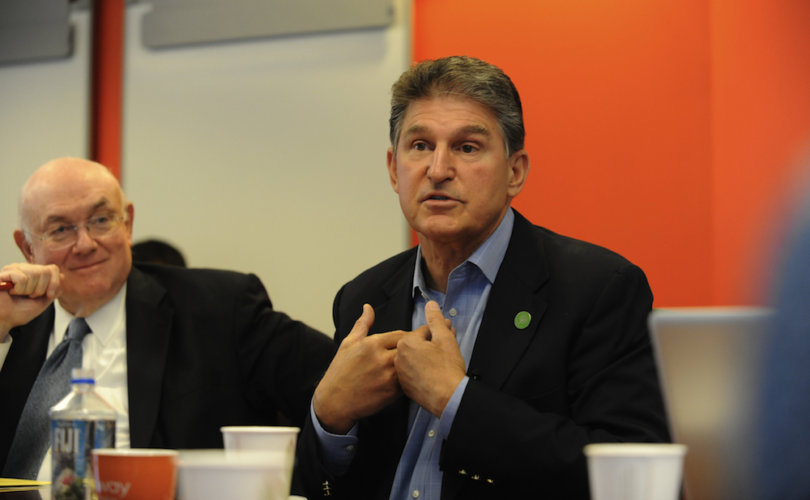 WASHINGTON (LifeSiteNews) — Democrat hopes of passing a controversial $3.5 trillion spending package hit another snag this week with Democrat Sen. Joe Manchin of West Virginia declaring he will only support the Medicaid expansion within the bill if it includes language keeping tax dollars away from abortion.

“We’re not taking the Hyde Amendment off. Hyde’s going to be on,” Manchin told National Review Wednesday. “It has to be. [The new Medicaid program is] dead on arrival if that’s gone.”

Traditionally included every year in federal budgets with little objection, the 40-year-old Hyde Amendment is estimated to have saved more than 2 million lives since its adoption decades ago, by forbidding most taxpayer dollars from funding abortions except for cases of rape, incest, or threat to a mother’s life.

While Senate Democrats lack the sixty votes necessary to strip Hyde from existing Medicaid appropriations, they have proposed adding a new, Hyde-free program to the spending bill currently being debated, which would only need a simple majority to pass under reconciliation rules. The Senate is evenly divided between the parties, meaning Democrats could pass the plan with a tie-breaking vote by Vice President Kamala Harris — unless Manchin refuses to go along with his party.

Manchin, who in June pledged to “support Hyde in every way possible,” also objects to the bill’s price tag, as does Democrat Sen. Kyrsten Sinema of Arizona.

This summer, Manchin proposed a deal to Democrat Senate Majority Leader Chuck Schumer under which the bill’s size would be limited to $1.5 trillion (with any revenue collected from the bill above that going to deficit reduction), the corporate tax rate would be limited to 25%, the top income tax rate to 39.6%, and the capital gains tax rate to 28%; the Federal Reserve would taper quantitative easing program, and no funds would be spent until previous COVID-19 aid money was spent.

Democrats are not expected to go along with Manchin’s more conservative demands.

As LifeSiteNews detailed last month, the $3.5 trillion reconciliation package (which some watchdogs say will actually cost closer to $5 trillion) is full of left-wing priorities, including language declaring “gender identity” and “sexual orientation” to be federally-protected classes like race or disability, and has been projected by the University of Pennsylvania Penn Wharton Budget Model to result in a 4% drop in GDP by 2050, with a 6.1% decline in private capital and a 8.9% increase in government debt.