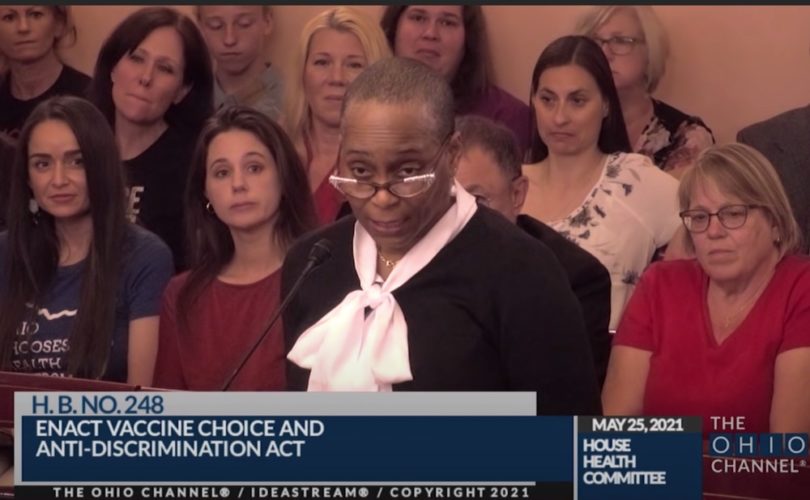 CORRECTION, June 9, 2021: An earlier version of this article incorrectly identified Dr. Erika Smith as Dean of Academic Services at Brandeis University. LifeSite apologizes for the error.

COLUMBUS, Ohio, June 8, 2021 (LifeSiteNews) –A powerful testimony during the hearing for an Ohio bill that would permit residents to decline to be vaccinated against the novel coronavirus compared the current push for mass vaccination to pre-Civil Rights era denial of human rights for the black population.

Dr. Erika Smith, who holds Ph.D. in English Literature from Case Western Reserve University (CWRU), said that “those who love freedom must act before it’s too late.”

House Bill 248 states that Ohioans may decline to receive the jab as long as they submit a written statement or verbally declare that they decline to be vaccinated.

The bill further clarifies that “When declining the vaccination, the individual … shall not be required to do anything beyond submitting the written statement or making the verbal declaration described in this section.”

“Current disparate treatment runs rife across this nation, spreading like wildfire, demanding in exchange for job security and participation in society the injection of medical treatments that are devoid of both FDA approval and legal recourse when damaging side effects occur, is draconian at best and criminal at worst,” Smith said.

“This is a matter of freedom,” Gross said in a press release.

“Without the exemption provisions this bill provides, the notion of a vaccine passport could easily lead to a class system in Ohio where segregation and discrimination will proliferate.”

Smith said she worries that vaccine mandates would result in a “two-tier society,” one in which citizens are required to provide proof of vaccination in order to simply participate in normal activities.

This, she warned, would create an apartheid state, with citizens divided by vaccination status.

“The idea of mandatory vaccinations for people to keep their jobs smacks of the same abuse that legislators have historically used against whatever people group they perceive to be inferior,” she said. “Forced vaccinations, medical passports, tracking and tracing, are all forms of medical apartheid.”

During her testimony supporting HB 248, Smith shared that her paternal grandmother was born on a plantation in Alabama. Her parents fought for justice during the Civil Rights movement so that Smith would be free, with equal privileges under the law.

But mandatory jabs and a “show-your papers” culture requiring proof of vaccination would change that.

“Today, citizens are fighting against the tyranny of government officials and the bullying from people in their daily lives who expect them to relinquish their God-given freedoms, upheld in the Constitution, to the state, and to obey mandates, mere words of men, which are not laws.”

State Rep. Tom Young (R-Dayton) responded favorably to Smith’s testimony. “You are spot-on about what this bill is,” he said. “It’s a freedom bill.”

While voicing strong support for HB 248, Dr. Smith nonetheless expressed disappointment that such a bill is necessary.

“I think it’s sad that we’re even in this situation where we have to write a bill in order for people to be free,” she remarked. “We are in the most powerful nation on this planet. It was created by people in 1776 who fought against tyranny in government, and now we’re revisiting the same types of things because people are too scared to stand up and say that they want to be free.”

During the question-and-answer session, Gross asked Smith whether she thought people might elect to leave Ohio if vaccine mandates and passports were implemented, noting that certain states, such as Florida, have moved in the opposite direction.

“I right now can’t leave to go to Florida,” Smith said, “but if things change in Ohio I would be willing to leave. I want to be someplace where I can be free. It’s as simple as that.”

Meanwhile, in California, a Democrat congressman recently announced that proof of vaccination would be mandatory for attendance at his first in-person event since the start of the COVID-19 crisis.

Rep. Jared Huffman (D-CA) made the statement in an email invitation, in which he said that “in-person attendance will be limited to 100 guests. Seating will be socially-distanced and masks are required. Proof of vaccination will be required at the event before entrance for in-person attendance.”