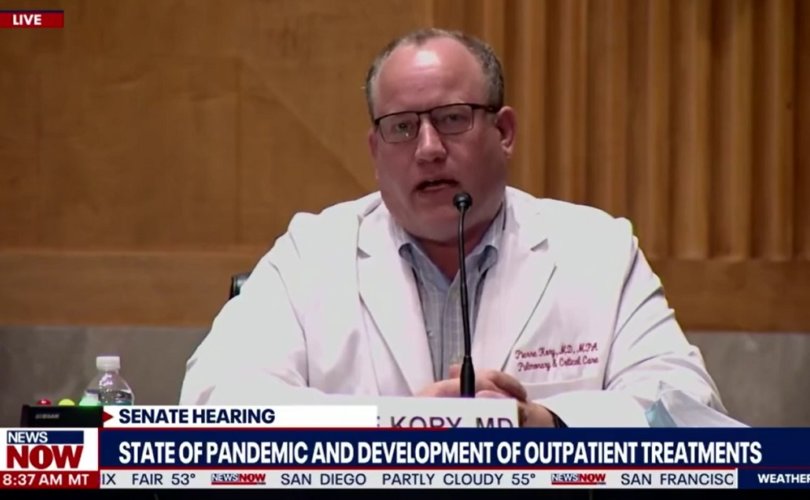 December 17, 2020 (LifeSiteNews) — As COVID-19 vaccine doses roll out across the world, top doctors increasingly tout a generic drug called ivermectin as a newly recognized potential “cure” for the virus.

Ivermectin, a Nobel Prize–winning anti-parasitic agent, has been the subject of dozens of studies and anecdotal success stories since it was found to reduce COVID-19 in a laboratory earlier this year. The Food and Drug Administration (FDA) has refused emergency authorization of ivermectin to treat the novel coronavirus, stating for months that “[m]ore testing is needed.”

Nevertheless, several medical experts testified to the benefits of the drug for COVID-19 patients at a hearing held by the Senate Homeland Security Committee last week. In an impassioned speech, Dr. Pierre Kory, an intensive care specialist from Wisconsin, spoke to what he called “the miraculous effectiveness of ivermectin.”

Kory is a founding member of Front Line Covid-19 Critical Care Alliance (FLCCC), “a group of highly published leaders in critical care” seeking to stop excessive mortality from COVID-19. FLCCC has developed a treatment regimen incorporating ivermectin, which the group claims has led to up to 83% lower-than-average COVID-19 death rates in hospitals that have applied it.

“I've been treating COVID pretty much every single day since since the onset,” Kory said. “When I say miracle I do not use that term lightly[.] … [T]hat is a scientific recommendation based on mountains of data that has emerged in the last three months.”

Kory pointed to multiple randomized trials awaiting peer review, which he and nine FLCCC colleagues highlight in a pre-print manuscript.

For example, a recent trial of 400 COVID-19 patients from Egypt found nearly 100% improvement in test groups treated with ivermectin. The anti-parasite drug also “significantly reduced the incidence of infection in health care and household contacts up to 2% compared to 10% in non ivermectin group,” according to the study.

Kory and and his colleagues also note published observation trials from Argentina demonstrating a nonexistent rate of COVID-19 contraction among people given ivermectin preventatively. The lead researcher for the studies, Dr. Héctor Carvallo, explained in an interview that “out [of] the 788 who received” an ivermectin regimen, “not a single one got infected.” Conversely, “almost over half, over 50 percent … got infected” from the control group, he said.

Carvallo added that “by now half of Argentina is using” ivermectin, as are doctors in at least ten other South American countries. While top British scientific journal Nature has censured Latin Americans for “unchecked ivermectin use,” Dr. Kory has attributed some of the region’s major victories against the virus to widespread adoption of the drug.

In his written testimony to the Senate, he related that in Peru, “the peak in deaths occurred at the time of distribution” of ivermectin, which the country approved for COVID-19 treatment in late spring. Every Peruvian state witnessed “rapid and sustained reduction in both case counts and death rates in patients” as ivermectin circulated, Kory contends.

Brazilian states with cities that took up ivermectin protocols similarly “show a much greater drop” in cases than others, with disparities of over 60% between neighboring areas, according to analysis linked by Kory. A subsequent study by a Brazilian-led team reported “a reduction of 31.5 to 36.5% in viral shedding” and 70–73% shorter symptom duration for patients treated with regimens that included the drug.

Ivermectin “needs to be immediately adopted systematically nationally and globally period,” Kory urged senators. “It will take months for the vaccine to be distributed to the general public and further time to have sufficient impact in this crisis,” he said.

“We need to offload the hospitals,” Kory pleaded. “We are tired. I can’t keep doing this. I have to go back to work next week. Any further deaths are going to be needless deaths.”

“You can use this medication in just about any condition,” he said. “It is safe, inexpensive, widely available.”

In the face of new evidence, regulatory agencies nonetheless have remained unwavering in their rejection of ivermectin as a tool to combat coronavirus. The FDA, which strongly dissuades people from taking ivermectin to treat or prevent COVID-19, has not substantially updated its recommendations since at least April. The agency’s guidance still refers to the eight-month-old article demonstrating the potency of ivermectin in a lab environment as “recently released.”

“Recognize that the amount of evidence that I have presented far exceed[s] the level required for a compassionate use authorization as defined by the FDA,” Kory said. “That happened for Remdesivir, a drug with far, far less supportive evidence and much, much higher cost. Why can’t it happen for ivermectin given this level of evidence?”

He slammed obstruction by the National Institutes of Health (NIH), as well, saying, “Their recommendation on ivermectin, which is to not use it outside of controlled trials, is from August 27th. We are now in December. This is three to four months later. Mountains of data have emerged from all from many centers and countries around the world.”

In Argentina, Dr. Carvallo reported that “as soon as our reports were published … resistance appeared in the horizon.” He said his team faced pressure from “many doctors who worked for the pharmaceutical industry, because this was a very, very cheap treatment.”

The “pharmaceutical industry is not really interested in cheap answers,” he said.

Dr. Jay Bhattacharya, a Stanford-trained economist and physician, noted as much at last week’s hearing, stating that “the NIH exists to solve this market failure.” At the same time, however, the agency “has made comparatively little effort to catalyze randomized evaluations of off-patent drugs from COVID-19 therapeutics,” but “has devoted considerable resources to aid the COVID-19 vaccine randomized trial studies,” Dr. Bhattacharya continued.

Frontline physicians at the Senate hearing repeatedly stressed the limitations of a central focus on vaccination to end the pandemic, like that employed by the NIH (which claims a stake in at least one COVID-19 vaccine). “Even if vaccines are 80% successful … we still need to treat the 20% of people who become ill with COVID-19 notwithstanding vaccination,” Dr. Rajter said.

Ivermectin in some ways offers more hope than vaccines for coronavirus patients, he related. “Some people may not be able to receive the vaccine for a variety of reasons. Vaccines may not be widely available for many months. Vaccines may no provide long-term immunity,” Rajter added. “Based on these factors, treatment for COVID-19 will need to remain on the forefront even after vaccination programs are initiated.”

“After personally witnessing the results of ivermectin-based protocols, I cannot stand by and allow hundreds of thousands of people to go untreated,” Dr. Kory said. “I cannot be traumatized by that.”