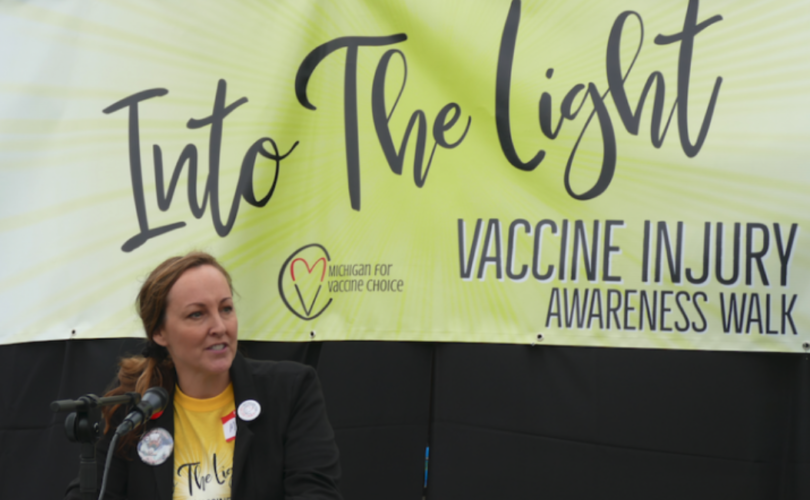 GRAND RAPIDS, Michigan, October 13, 2020 (LifeSiteNews) — Families from across Michigan gathered at Millennium Park in Grand Rapids this past Saturday to raise awareness about persons injured by vaccines and to spread truth about the coronavirus.

The joyful occasion, dubbed by organizers as the first annual “Into the Light: Vaccine Injury Awareness Walk,” was held under a sunny sky and warm temperatures.

Maija Hahn, the Westside Regional Director for Michigan for Vaccine Choice, told LifeSiteNews the rally was important because the mainstream medical community regularly attacks their message.

“We have an epidemic of vaccine injury in this country, but this is a group of people that are censored. They’re marginalized. They're demonized. They can't even share their stories of their children that have died or have been permanently injured by a vaccine,” she said.

“We aren't anti-vax. We’re not pro-vaccine,” she later clarified. “We just believe in freedom, that we have a right to our own bodies to choose what goes into those bodies…we believe in informed consent.”

Although the day's activities were scheduled from 11:00 a.m. until 3:00 p.m., the enthusiastic, often-times high-energy health professionals and medical freedom activists who spoke at it caused it to go longer than planned.

“This is such an important gathering,” one pro-Trump attendee told LifeSite. “The coronavirus has made vaccinations and all the issues surrounding them — what ingredients they contain, whether they’ll be mandatory or not, etc. — to be front and center. We need to make our voices heard.”

Some of the event’s speakers shared personal stories about their own family’s experiences with vaccines. Others addressed topics related to COVID-19 and bodily health more generally.

“In 1979, the first vaccine was made that used aborted fetal cells,” Marissa Brand, a doctor of natural medicine, said during her remarks to the approximately 250 people who came. “There are 24 vaccines worldwide that use aborted fetal cells. In the U.S., we use 10 of them.”

Brand, who blogs at Dr. Scalar.com and who lives in West Michigan with her husband Colin and their son, also explained that aborted baby DNA that’s used in vaccines has been linked to multiple health issues, including autoimmune disorders, genomic instability, autism, and even cancer.

Brand was just one of the many, mostly female voices to address the rally, which was live-streamed by volunteers working on behalf of We Are Vaxxed, a non-profit group that produced the popular Vaxxed and Vaxxed II: The People’s Truth documentaries. The films feature testimony from persons who claim there’s a link between a number of vaccines and autism. Dr. William Thompson, a whistleblower who worked at the Centers for Disease Control, is also interviewed in the movies.

Others who addressed the gathering included Michigan attorney Katherine Henry and Dr. Christina Parks, a molecular and cellular biologist who graduated from the University of Michigan in 1999.

Henry’s passionate speech highlighted the efforts she’s been making to curtail the emergency powers of Michigan's Democratic Governor Gretchen Whitmer. Whitmer has been widely criticized for what many conservatives have called “authoritarian” measures taken during the coronavirus outbreak. Henry is the founder of the Restore Freedom Initiative and has previously argued in front of the Michigan Supreme Court.

Dr. Parks is seen as one of the most brilliant medical minds involved in the fight for vaccine choice, although she now dedicates most of her time to being a full-time mom for her disabled daughter. She told LifeSiteNews that she believes the coronavirus came from China and that it’s a form of “biological warfare.”

“The mainstream media is controlled by Big Pharma…even Fox News…everything is now propaganda instead of truth.” There’s no need for mandatory vaccines and mask-wearing, she said. “Hydroxychloroquine has some of the strongest science I have ever seen…the severity of coronavirus is also very highly correlated with deficiencies in vitamin D…but the media doesn’t talk about this.”

Watch the full remarks of the speakers below:

Despite the serious nature of the rally, the family-friendly atmosphere it provided allowed attendees to have a variety of opportunities to enjoy themselves and get to know other like-minded people. James Williams, an autistic man in his 30s who travels the country spreading awareness about his life story, talked with passerbys and sold music CDs and a book he wrote. Local chiropractors and natural health doctors had booths of their own. A nearby pavilion featured photographs of infants who were injured and in some cases even killed by vaccines. Several rally goers wore hats that said “Make Vaccine Companies Liable Again.”

Sadly, the upbeat nature of the walk was marred by vandals who later in the day defaced several of the signs displayed at the event.

Hahn concluded the rally by urging attendees to make their voice heard this election season and beyond.

“I ask you to not go silent into this night. And I ask you to fight for our children and the future of our country. Do not stay silent anymore. The time has come to end the madness, to end the slaughtering. Acknowledge the vaccine injured! Rise up. Make the change that we need. God Bless you.”