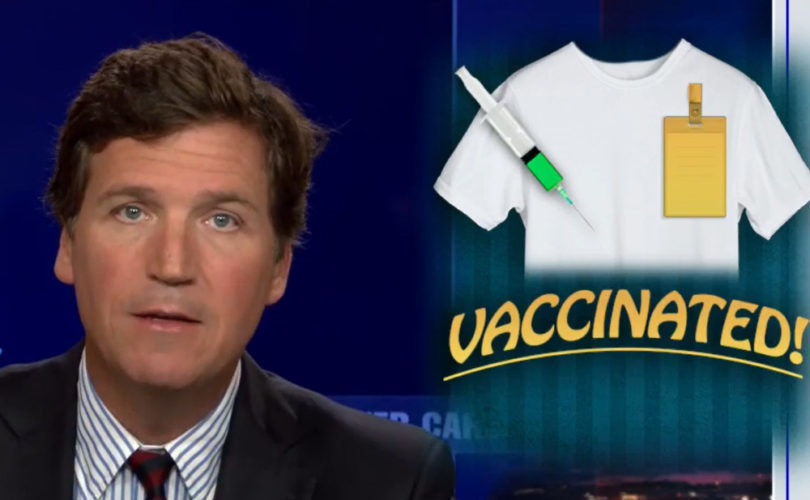 WASHINGTON, June 3, 2021 (LifeSiteNews) — Tucker Carlson has made the inevitable comparison between the new segregations of Americans on the grounds of vaccination status and the old segregation of Americans for racial differences.

Before the COVID-19 pandemic, “pretty much everybody agreed that segregation was the worst thing this country ever did,” Tucker Carlson told his audience on Tuesday night, kicking off a sardonic monologue about vaccination passports and the social penalties for refusing the COVID-19 vaccine.

“Forcing certain categories of citizens into separate, lesser accommodations, barring them from public places, treating them like lepers or untouchables: that was completely immoral and wrong,” the Fox News host continued. “We were told that a lot, and most of us strongly agree. It was wrong.”

“Just this morning the New York Times informed us that unless you can prove you’ve taken the injection that the Democratic Party demands you take, you are no longer permitted in bars, comedy clubs, even some dance competitions, in the state of New York,” he observed. “You’re too dirty to appear in public. You’re not welcome near normal people.”

Those who choose not to take COVID-19 vaccines will not be able to attend basketball games in New York’s Madison Square Garden, Carlson said. (A June 2 update to the stadium’s website says that “fully vaccinated sections” have been added to the Gardens.) They will also have to sit in “roped-off sections” to watch baseball games.

“Medical Jim Crow has come to America,” the host said, provocatively citing the laws that enforced racial segregation in parts of the U.S. from the 1870s until 1965. “If we still had water fountains, the unvaccinated would have separate ones.”

The original “Jim Crow” was a character in a “blackface” stage performance popular in the 1830s. The name subsequently became a derogatory term for African-Americans and then a description of pro-segregation legislation, “the Jim Crow laws.”

Carlson echoed confusion about why many who have been vaccinated against COVID-19 believe they still need to be protected from people who haven’t. He suggested that powerful interests are using the vaccination issue to find out who is “decent” and who needs to be punished.

“It’s about finding out who has obeyed,” he suggested.

Being able to discern between the vaccinated and the unvaccinated has been made easy through technology. Carlson played a news item about the $19.99 “Immunaband,” a wristband that can be loaded with a copy of a vaccination card. He added that New York is doing something similar by issuing the “Excelsior Pass.”

“The Excelsior Pass entitles you to all the rights and freedoms you imagined you were born with but that turn out to be entirely contingent on whether you do exactly what [New York Governor] Andrew Cuomo says to do immediately,” Carlson joked.

He poured scorn on the idea that the “Excelsior Pass” cannot be hacked, mentioning that Alfred Fox Cahn — an anti-surveillance activist — had managed to hack one in 11 minutes. But the host was even more disturbed by the precedence that vaccination segregation and wristbands set.

“Why should it end here?” Carlson asked. “The coronavirus is transmissible and it can be dangerous, but it’s hardly the only illness that fits that description. There are many.”

“If politicians can segregate potential COVID carriers from the rest of the American population, why can’t they do the same thing to people with HIV, or tuberculosis, or Hepatitis C? … At this point, there really isn’t a reason why this wouldn’t happen because the precedent has been set.”

The host also reflected that it is apparently no longer illegal to demand personal medical information, although the U.S. government has made it clear that it is certainly illegal to fake vaccination cards. Another change is public attitude towards coercing American citizens to take experimental drugs. Carlson cited a popular 2003 decision by a federal judge that American soldiers could not be forced to take an experimental vaccine against anthrax.

U.S. District Judge Emmet G. Sullivan ruled, “The women and men of our armed forces put their lives on the line every day to preserve and safeguard the freedoms that all Americans cherish and enjoy. Absent an informed consent or presidential waiver, the United States cannot demand that members of the armed forces also serve as guinea pigs for experimental drugs.”

This, Carlson recalled, was seen as “a victory for civil liberty.”

“How would it be seen now? It would be … denounced as a win for QAnon.”

The host believes this is because of a demonstrably false narrative being peddled by the left-wing mainstream media that the most prominent group refusing to take COVID-19 vaccines are white, male Republicans.

Carlson played clips of five talking heads on CNN insisting that “white Republican men” are lagging behind in taking the vaccine. However, as the Fox host pointed out, and as has been widely reported in the U.K. press, it is ethnic minorities who are least likely to accept the vaccine.

Nevertheless, White House press secretary Jen Psaki told reporters that to overcome the reluctance of “white conservative communities” to take the vaccine, the government had run public service announcements on “The Deadliest Catch,” a popular documentary show about deep-sea fishing, and had reached out to both the National Association for Stock Car Auto Racing (NASCAR) and Country Music TV.

Carlson intimated that this was an attempt to bolster the idea that white, rural conservatives are dangerous.

“It’s the white men again,” Carlson snickered. “But not just any white men. It’s the ones who like country music and NASCAR, not the ones who go to Aspen.”

“The white Republican men are dangerous, and they can sit at the back of the bus. In fact, they can walk.”

However, the statistics show that both black Americans and Hispanic Americans have been more “hesitant” than white Americans to get the vaccine. And because people who are not vaccinated are being segregated into “unfashionable” sections at ball games, this implies that many black people are going to be treated — yet again — like second class citizens.

“That’s going to make for some pretty embarrassing photographs some time soon,” Carlson said. “It seems like the new segregation looks a lot like the old segregation, and we wonder how they’re going to explain that. Can’t wait to hear it.”