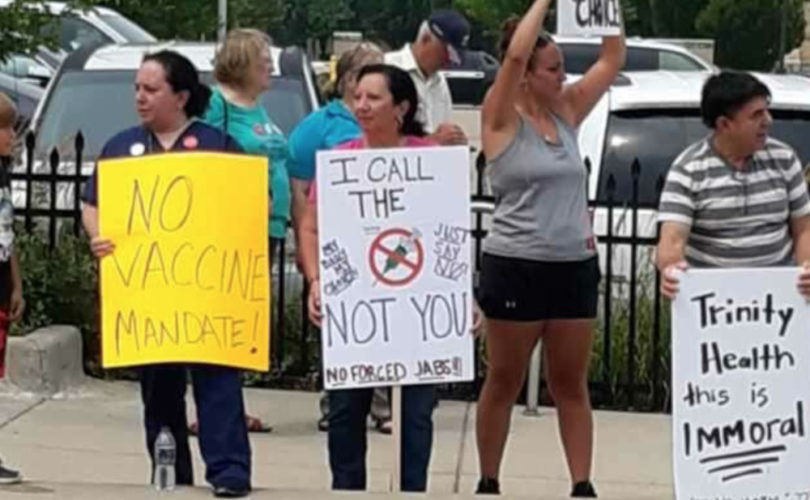 GRAND RAPIDS, Michigan, July 29, 2021 (LifeSiteNews) — Thousands of nurses and other medical professionals across the state of Michigan are taking a stand against their employers who are now forcing them to get the COVID jab in order to remain employed.

Over the last several weeks, multiple protests have been held outside various hospitals in Detroit, Ann Arbor, and Grand Rapids. The rallies are in opposition to the COVID shot as a condition of employment.

Protestors appeared this past Saturday in Grand Rapids outside Trinity Health, a Catholic hospital conglomerate that employs over 117,000 individuals across 22 states. Persons who attended the rally held signs that read, “No mandatory experimental jabs,” “COVID vaccine makers have zero liability,” and — following the famous pro-abortion slogan — “My body, my choice.”

According to MLive.com, Trinity Health decided earlier this month that all employees must have proof they’ve received the injection by September 21 or they’ll receive a termination notice.

An all-staff email sent by Grand Rapids-based Spectrum Health was forwarded to LifeSite. The email states that the company will require the shot once the Food and Drug Administration (FDA) approves it.

“This step will save lives and increase the safety of our community,” the email reads, citing “science” and statistics about infection rates that have long been disputed by medical freedom activists. The announcement does mention religious exemptions will be considered.

Michigan Republican gubernatorial candidate Ryan Kelley was present for the protest in Grand Rapids. He also attended the rally at Henry Ford Hospital in Detroit.

“This increasingly two-tiered society that we live in (vaccinated and unvaccinated) is heading towards the implementation of vaccine passports, which should be categorically rejected.”

“This is all part of the ‘Great Reset’ in which, among other diabolical plans, they want to address the public ‘good’ by forcing the twisted, Leftist idea of ‘health’ on the rest of us,” he continued. “Just like ‘14 days to flatten the curve,’ this drive to force the jab on all of us will result in the exclusion of the unvaccinated from society, unless we stand up for our rights, right now.”

“In 2020, healthcare workers were hailed as frontline heroes, saving our society. Now they are unworthy of employment unless they get an experimental jab. This is foolish and downright wrong. This fear-based propaganda approach is deceiving, and the government is failing the people on medical freedom.”