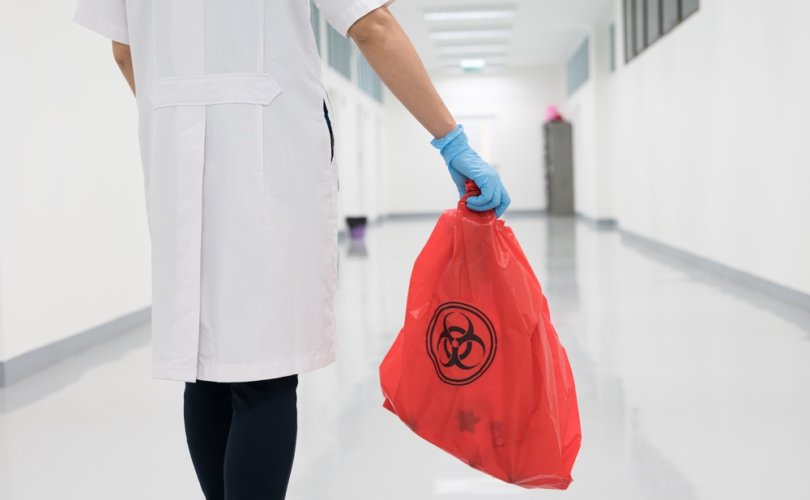 BALTIMORE (LifeSiteNews) — A Baltimore-based medical waste facility that runs a “Waste-to-Energy” program has strongly denied claims by pro-life groups that it transports or incinerates the bodies of aborted babies.

Pro-life activists have made the startling allegation that the Curtis Bay Medical Waste facility, located in Baltimore, Maryland, incinerates the bodies of aborted infants allegedly collected as “medical waste.”

The medical waste facility has strongly denied that it even transports the bodies of aborted babies, arguing it’s against company policy which considers both “fetal remains” and “human cadavers” in an “unacceptable waste” category.

RELATED: Dead babies found in DC apartment may have been victims of infanticide after abortion attempts

Handy has stated that she obtained the “extremely late term” infant bodies from a whistleblower, and planned to give them a proper burial.

Curtis Bay Medical Waste of Baltimore tells @wusa9 it does not handle or transport any fetal remains, despite @PAAUNOW video showing its label in graphic video. pic.twitter.com/2cMjUMnQRQ

Washington, D.C. police found the remains of the five babies at Handy’s residence after the FBI raided her home and arrested her Wednesday on charges of “conspiracy against rights” and “FACE Act offenses” after she and eight other activists conducted a “traditional rescue” at a prominent D.C. abortion mill in October 2020.

PAAU has stated that the bodies of the fully developed infants were obtained from a truck driver who was allegedly transporting the aborted babies in a box to Curtis Bay Medical Waste Center’s incineration facility, Live Action reported.

Handy and Terrisa Bukovinac told The Daily Wire in an interview Tuesday that they obtained the box containing aborted baby parts March 25 at Washington Surgi Center, an abortion clinic in downtown D.C. run by infamous abortionist Cesare F. Santangelo, who has a history of medical malpractice.

LifeSite reached out to the Washington Surgi Center and was directed to the National Abortion Federation (NAF) for a statement. The NAF has not returned the request for comment.

Bukovinac and Handy told The Daily Wire that they obtained the box after seeing a truck driver putting boxes in the back of the truck and observing several other boxes on a dolly nearby.

The pro-life activists asked to to take the box, which they believed contained “dead babies.”

Bukovinac said the driver agreed after she and Handy explained they wanted to give the aborted babies inside a “proper burial” and funeral.

According to The Daily Wire, Bukovinac and Handy said they then retrieved the box, allegedly “covered in labels” from Curtis Bay, and brought it back to their apartment.

Bukanovic told LifeSite’s John-Henry Westen in an extended interview Tuesday that before Handy’s arrest on March 28, a Catholic priest came and offered a funeral Mass for unbaptized children in front of the refrigerator where Handy and Bukanovic were storing the babies.

PAAU held a press conference Tuesday to address the situation after Handy’s arrest and demand justice for the five babies whom they argue were fully viable and could have survived on their own had they not been killed.

During the press conference, pro-life activist Missy Smith made the shocking allegation that Curtis Bay has been collecting the bodies of aborted babies in order to incinerate them to create energy for the city.

According to its website, Curtis Bay “utilizes ​Waste-to-Energy incineration to safely convert infectious/biomedical waste and non-hazardous pharmaceuticals into useful energy.”

Smith alleged that “[t]his means, tragically, that they receive, transfer, and burn the corpses of aborted babies to make electricity for the households and businesses of the Baltimore area.”

The medical waste company that picks up bodies from Cesare Santangelo’s late-term DC abortion clinic, where the 5 infants were found, says on its website it uses “Waste-To-Energy incineration to safely convert infectious/biomedical waste…into useful energy.” #JusticeForTheFive

Meanwhile, Randall Terry, who founded the pro-life organization Operation Rescue and acts as a spokesman for PAAU, opined that he finds it “hard to believe” that a company that picks up medical waste from abortion clinics would not recognize that such waste would contain fetal remains.