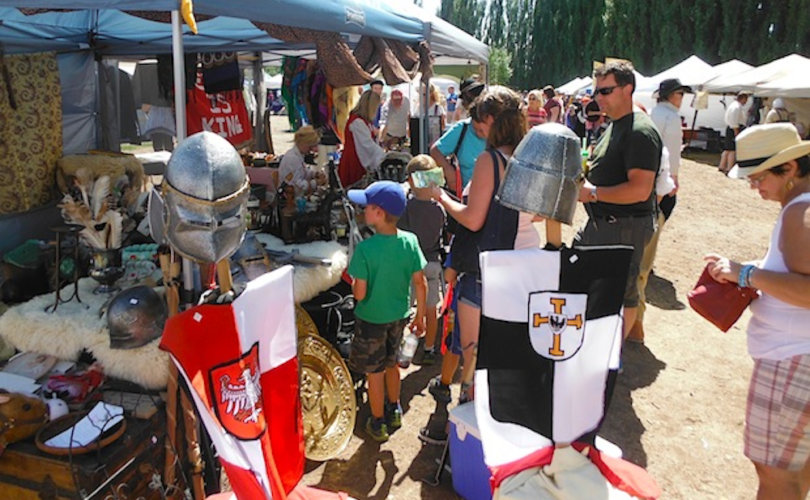 BROOKS, Alberta, August 8, 2016 (LifeSiteNews) – Last weekend’s Medieval Faire in Brooks, Alberta, featured knights and witches and tarot card readers and statuettes of the pagan goddesses, but no signs of Christianity.

Faire coordinator Barbara Matson set the tone for the event when she rejected a request from Art Pawlowski, controversial pastor of Calgary’s Street Church, in an e-mail on May 31. “It is the Brooks Medieval Faire Society's decision that you are not welcome to vend at our Faire.”

Pawlowski told LifeSiteNews: “Christianity is part of the Middle Ages. And there are witches and Tarot readers and warlocks at other booths.” He is making a complaint to the Human Rights Commission and taking the Faire to small claims court after investing $56,000 in merchandize he has no place now to sell.

“Go ahead,” Matson e-mailed in response to his threat. “It is our Faire and our choice whether we allow any religion to flaunt itself at our Faire.” Pawlowski raised $5,000 at the weekend event last year for the Calgary Street Church from two booths backed by a banner proclaiming “Jesus is King.”

But according to Matson, “We decided six years ago that we would not promote any one religion and found your backdrop banner to be offensive to us as well as complaints we had from other attendees and vendors. This decision is final.”

Pawlowski told LifeSiteNews: “Nobody said one word against us last year,” and indicated he was welcome to return — until the May 31 rejection e-letter. Moreover, he told LifeSiteNews, he saw plenty of other forms of religion on display. At the Master’s Ark, there was jewelry from Mystic Spirit Design featuring images of the “Goddess,” and its advertising claimed, “Both men and women are drawn to these necklaces to honor the Goddess and to bring balanced energy into their lives.”

Another vendor was “Celtic Witch Psychic,” offering “Tarot/Palmistry, circlets & other treasures.” At the “Moonlight Workers” booth, they insisted that “everyone has angels and spirit guides available to help with daily problems and life’s challenges. Through a 30-60 minute card reading, we can identify areas of concern, connect with your angels and guides and give you their guidance to resolve your own issues.”

Pawlowski said he saw the re-enactors of medieval combat, dressed in the armor of knights, preceding their jousts with morning prayers in authentic re-creation of the Christian faith pervading the Middle Ages.

Indeed, one of several registered re-enactor groups was “All Saints Medieval Fellowship,” self-identified as “an ecclesiastical organization in Alberta,” which sounds religious given the dictionary meaning of “ecclesiastical,” which is “of, or relating to, the Christian Church or its clergy.”

Adding to the inconsistency, Pawlowski said he was told in later correspondence that the fair’s organizers might have reconsidered or negotiated their decision if he had asked earlier (after describing the decision as “final”) and advised him to apply for the 2017 event.

“The time has come for Christians to fight back,” Pawlowski told LifeSiteNews. “We should use the enemy’s tools to fight the enemy.” He identified the tool as the Alberta Human Rights Commission. He added, “If we don’t, Christianity will disappear.”

Pawlowski has had frequent encounters with civic officials in Calgary because of his street preaching.

Matson responded to a call from LifeSiteNews with a polite “no comment, thank you.”

Calls to the city's mayor and chief administrator were not returned.