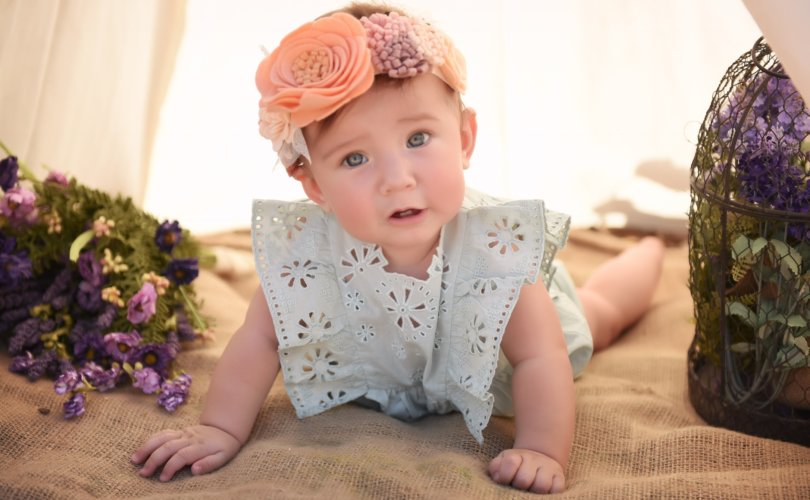 Autumn is the grandchild of Star Wars star Mark Hamill.

LOS ANGELES, California, June 19, 2017 (LifeSiteNews) – The mother who was pressured to abort by the famous family of her baby’s father is going about the business of raising her child that she welcomed into the world last fall.

Maegan Chen was dating Nathan Hamill last year when she became pregnant. Hamill, some of his friends and family members – he’s the son of actor Mark Hamill and his wife Marilou – tried to coerce Chen or manipulate her into aborting.

At one point, she agreed to the abortion and was given the abortion pill, but the drugs didn’t work and her daughter, Autumn, survived.

Despite many challenges, Chen is resolute in her belief that giving her child life was the right thing to do and that her daughter is a gift from God.

Chen has that same message for other mothers in her situation: You won’t regret choosing life for your child.

“It’s hard,” she said, “and you will have to sacrifice. And it may seem like a burden, but it’s going to be the best thing you’ve ever done.”

Autumn is a happy baby who is always smiling, Chen told LifeSiteNews.

“She’s very affectionate,” Chen said. “I’m really very lucky. She always wants to be with me.”

The seven-month-old is beginning to crawl, rocking on all fours, and she loves to play with Chen’s French bulldog, grabbing his face and pinching him.

Autumn’s bright blue eyes always have people approaching to remark on their beauty, said Chen, and the joyful baby always smiles when she sees her six-year-old brother, Ethan, reaching for him.

As gorgeous as her daughter is, Chen hopes that people will see past her physical beauty to recognize that she has the sweetest spirit and other wonderful qualities.

While Chen concedes she has not been a regular church-goer, she is very much a believer in God, and in Satan, and she’s purposeful in stating that God is the only reason the abortion didn’t work.

She’s grateful to God, and His intervention in Autumn making it into the world is not lost on her.

“He knew my heart,” Chen said, “and He knew I didn’t want to have an abortion.”

Chen had her daughter baptized at a Pasadena, California, church on Easter Sunday. Autumn was sponsored at the service by a friend of Chen’s.

“I wanted her baptized,” Chen explained. “I believe with what she’s going to face (in life), I want God’s protection for her.”

Chen feels that Autumn is God’s gift, especially because she lost another child to abortion between Ethan and Autumn.

Many people around her had told her to abort Ethan, she recalled, but she didn’t and never regretted it. Regret does not come close to covering her feelings for having aborted her next child.

“It’s like an empty feeling,” she said, describing the desolation. “I felt whole before. Afterward, I felt empty.”

Chen explained how she has had been depressed since having the abortion. So when she was pressured to abort Autumn, it brought the devastating loss back to the forefront.

Chen gets emotional recalling how that while she was carrying Autumn and still suffering the loss of her aborted child, she would look at her son and knew he was meant to be. Chen said she realized then that Autumn was meant to be too.

“I look at Ethan and I think he’s so amazing,” said Chen. “Then I think, what if that baby had been just as amazing? … I’ll never know …”

This brought her to where she was convicted in keeping Autumn despite the pressure she faced.

“God blessed me with her,” Chen stated. “My heart was so broken from the abortion.”

With God’s gift of another child, she has begun to heal and feel whole again.

Even with the circumstances surrounding Autumn’s conception and birth, Chen would tell her daughter she’s a gift.

And her advice for other mothers in this situation is for them to think of no one else before their baby.

She does not pretend that single motherhood is easy.

“It may seem hard or seem that they’re alone,” Chen stated. “But they just have to look for resources. I had no idea at first about what was available.”

There is one thing she knows for certain.

“The second you hear your baby cry and see their face,” said Chen, “it’s all worth it.”