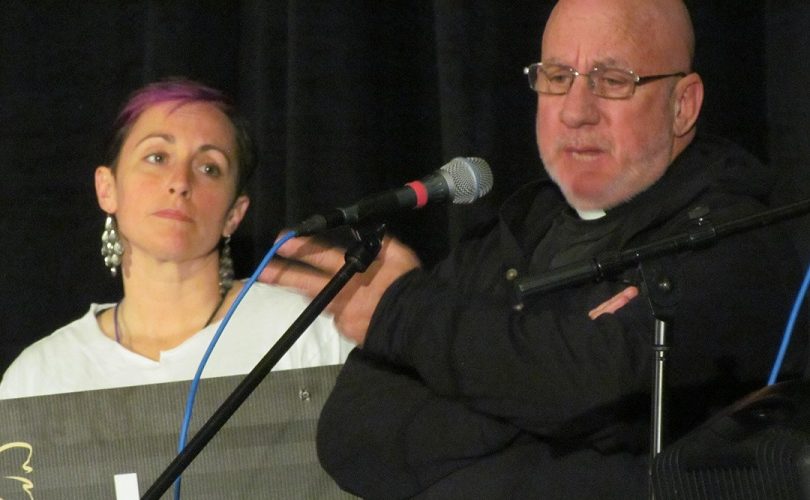 WASHINGTON, D.C., January 21, 2016 (LifeSiteNews) – The Rev. Stephen Imbarrato is a father who regrets losing another kind of fatherhood.

Fr. Imbarrato has served as a priest for 10 years and founded two pro-life organizations in the Archdiocese of Albuquerque: Project Defending Life and Protest ABQ.

He's also a parent grieving the children he lost decades ago to abortion.

Fr. Imbarrato told hundreds of young people at the annual March for Life Youth Rally in Washington, D.C., this afternoon that, long before he was ordained or became a seminarian, he got his girlfriend pregnant and told her “it would be best if you had the abortion.”

He remembering saying the words that “many men do…'I'll support you, whatever you decide.'” After she decided to have an abortion, “we both got very guilty quickly,” he said. “We parted ways.”

He eventually would find his calling as a parish priest and pro-life advocate, but his child never left his mind.

One day, while counseling young women on the sidewalk outside the same abortion facility where his girlfriend had aborted years earlier, he became convicted by God over his role in the long-ago abortion.

With his bishop's permission, he contacted his old flame through mutual friends, and they agreed to meet. “I apologized to her and took full responsibility for talking her into having the abortion,” he told the crowd of young people. “Tears came to her eyes, and I knew this was what she needed to hear.”

Then she told him something he needed to hear.

“I said, 'I feel blessed that at least we have a baby in Heaven,'” Fr. Imbarrato said.

“I asked, 'There were two abortions?'”

“Then I realized she had been struggling with that secret all her life, for 35 years,” he said.

He told the young people that he named their unborn babies Mary and Thomas.

In the March for Life tomorrow, Fr. Imbarrato – who now works for Priests for Life and is the first man to speak as part of the Silent No More Awareness Campaign – will carry a sign that says, “I Regret Lost Fatherhood.”

Numerous speakers with Silent No More told the teens and tweens, who had come as far as California and Canada, that they regret their abortion, or their role in the abortion industry this afternoon.

Jewels Green, a one-time abortion facility worker in Pennsylvania, remembered how, as a scared teenage girl, she felt she had no choice but to abort. “At 17, I'm a high school dropout, a drug user, and I wanted to keep my baby,” she said. But “I knew no one who supported my decision to parent.”

Feeling pressure from every side, she said, “I surrendered – 27 years, 15 days ago.”

“It nearly killed me,” she said, “not physically, but the emotional aftermath was swift and severe, and within a couple of weeks, I attempted suicide.”

She said that facing up to her “role in the death of my first child and my role in the deaths of thousands of children in the clinic” led her “to spiritual conversion, healing,” as she embraced forgiveness and God's mercy for her past.

She thanked God that she failed to end her life but hopes no other young woman will go through what she did.

Standing behind her another former Planned Parenthood worker, Catherine Adair, held a sign that matched Jewels', reading, “I Regret Providing Abortions.” After Green concluded her heartfelt presentation, Adair hugged her.

“In the broken state I was in, and imagining I had no choice, I gave in,” she said.

“Imagine,” she said, being a post-abortive woman who signed such a form, then “watching the Planned Parenthood videos that were released this year,” she told the crowd, clearly pained.

The Silent No More Awareness Campaign, which was formed to support those struggling with the pain of abortion, will once again have a number of speaker share their stories outside the Supreme Court after tomorrow's March for Life.