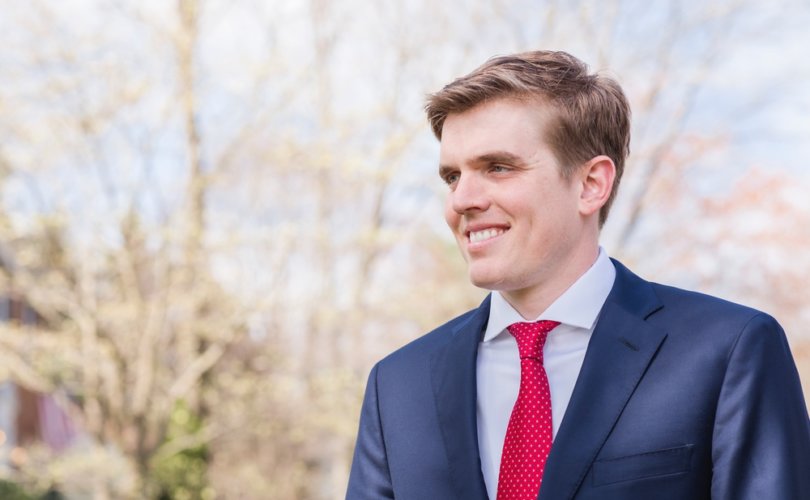 FAIRFAX COUNTY, Virginia, June 10, 2019 (LifeSiteNews) – Horrified by a narrowly defeated infanticide bill the governor of Virginia infamously defended, 32-year-old Nick Bell is running for the commonwealth’s 39th House District as an “unrelenting opponent” of “efforts to normalize infanticide and abortion up until the moment of dilation.”

“When that infanticide bill was considered and barely overturned this year, that’s when I thought, ‘Wow, this is messed up. How did my delegate vote?’ And so, that’s when I saw that she was one of three people in the subcommittee who voted for it, and so that’s what got everything started,” Bell told LifeSiteNews.

So, he quit his job working for the federal government and began campaigning full-time on an aggressively pro-life platform.

The infanticide bill was introduced by Delegate Kathy Tran and would have allowed abortion even as a woman was in labor – something she admitted during a subcommittee hearing.

Bell’s opponent, incumbent Del. Vivian Watts, supported Tran’s infanticide bill when it was in subcommittee and has a long history of supporting abortion.

“She voted against every single version” of Virginia’s Born-Alive Infant Protection Act, a law passed in 2003 that prohibits killing babies born alive after failed abortions.

Bell wants Virginia to enact a law mandating “the doctor has to take steps to save the baby” if a baby survives an abortion.

Constituents in the 39th district have “responded amazingly,” Bell told LifeSiteNews. “A lot of people are stoked and fired up…I think the grassroots is very upset.”

“Once people find out how extreme the Democrats are on this, then…it’s gonna be hard for them” to maintain voters’ support.

Watts also promises on her website she “will continue to vote against bills to bar late term abortions.”

Watts promises on her website she “will continue to vote against bills to bar late term abortions.”

“To stop state sponsored infanticide, the pro-life movement must remove Democrats, like Vivian Watts, who support infanticide from office,” Sean Fieler, Chairman of the American Principles Project, told LifeSiteNews. “Nick Bell [clearly] understands this and has made Vivian's support of infanticide the focal point of his campaign against her. If Nick wins this fall, we can expect both state and federal candidates to challenge pro-infanticide Democrats in 2020.”

Late-term abortions usually involve injecting babies who could survive outside the womb with digoxin, which causes a heart attack, and then delivering them stillborn. Abortions committed on babies between 13 and 24 weeks old usually are done by dismembering the child in the womb. First trimester abortions are done by giving a mother a pill that blocks the baby from getting progesterone, the hormone that allows her to receive nutrition and hydration from her mother. Another pill then causes contractions and then the baby is expelled from the womb. Other first trimester abortions vacuuming the preborn baby from the womb.

Bell says although no debate has been planned yet, he’s open to one. He also noted his pro-life beliefs come from the science of embryology.

“The science is extremely on our side,” he said. “At 10 weeks there’s a fetal heartbeat. The baby can feel pain as early as 10 weeks. It has all the genetic material from conception.”

And even though Bell’s primary issue is stopping infanticide and abortion – “the motivator [to run] was the extremism of the Democrats on this issue” – he says if elected he is ready to address other issues, too.

“I have a solid transportation plan. I’m going to be talking about education.”

‘It’s smart politically to focus on this issue’

Soft-spoken and easygoing, Bell grew up in his district. He attended W.T. Woodson High School and then The College of William and Mary.

“I went to the Dominican Republic as a missionary for six months in 2010,” he told LifeSiteNews. He also lived in Spain “teaching English as a day job” and playing semi-professional basketball at night.

The person who’s had the biggest impact on his life is his dad, Jeff Bell, who was also involved in politics. He was “a very strong Catholic,” Nick, who is the second-born out of four, recalled. When his father died in February 2018, it “was really tough, unexpected. He didn’t have any signs of heart problems.”

“It’s been really tough but I think he’s helping me from heaven with this campaign,” said Nick.

“I think this race is important because a lot of the other delegates in Virginia are not speaking out on this issue,” he said. “The typical orthodoxy is, ‘let’s not talk about abortion. Stay away from it.’”

But “whatever your views on abortion, this is about killing babies that are literally already born or about to be born…it’s smart politically to focus on this issue.”

“To see if I can beat a Democrat in a blue district, running really hard against infanticide and against late-term abortion, it’s gonna be a great test case to see whether this strategy works [for other Republicans] going into 2020,” he said.