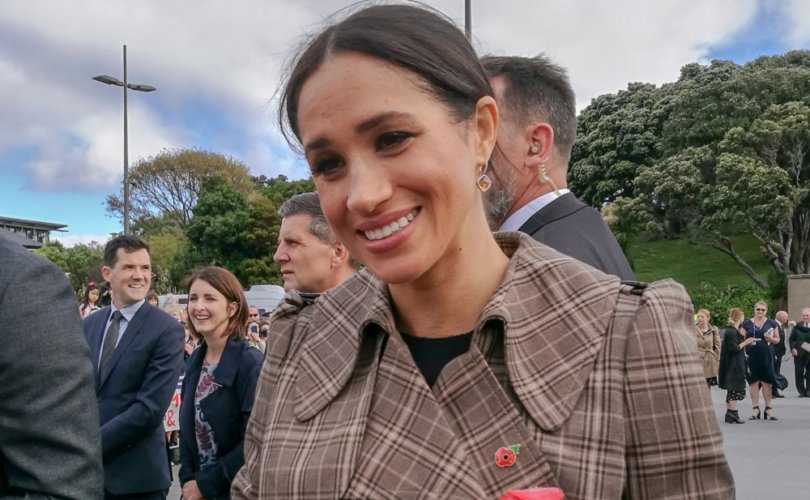 The official Instagram account for Markle includes a copy of the cover for the September British Vogue, titled “Forces for Change.” The announcement said Markle chose a “diverse selection of women from all walks of life” while asserting that they have “driving impact” and raise the bar for “equality, kindness, justice and open-mindedness.”

In keeping with the popular magazine’s coverage of fashion and self-indulgence, the cover also offers a mirror so the viewer’s face is included with the selected women (and man), including Irish disability rights activist Sinead Burke, American actress Jane Fonda, Swedish leftist Greta Thunberg, and Mexican actress Salma Hayek Pinault. Also included is Laverne Cox, who, according to a bio at IMDB.com, was born in 1972 and was given the name Roderick Laverne Cox.

According to Vogue editor Edward Enninful, he and Markle chose photographer Peter Lindbergh to photograph the celebrities. It was, he said, because, “Peter sees beauty in real people, in real situations. He makes everybody feel their best.”

Laverne Cox, the former Roderick Laverne Cox, said in a 2018 video for Self that he began chemically adjusting his hormones “20 years ago.” He was raised by a single mother and grandmother and is best known for playing the role of Sophia Burset on the award-winning series Orange Is the New Black, which chronicles the lives of incarcerated lesbians and other women. In June, Cox revealed on Instagram that he had broken up with Kyle Draper, a man. The announcement read: “We decided we should make a public statement since our relationship was public in ways neither of us anticipated,” adding, “We know our relationship meant so much to so many people, especially trans folks, giving them hope that this kind of love is possible for them as well.” Proclaiming that “trans is beautiful,” Cox said questions from the public about how transgender people have made themselves look like members of the opposite sex serves to “objectify” them. In the Self video, Cox revealed that he had had a series of homosexual affairs. He emotionally recalled his struggles over body image, money, and homelessness while calling on transgender people to accept themselves. “I exist in this body, feel in this body. It’s really important. But I’m more than my body. There’s a lot of different ways to be a woman.”

The coming edition of Vogue will include Markle’s interviews with former U.S. first lady Michelle Obama and with renowned primatologist Jane Goodall. The Instagram announcement records that Markle stated that being a guest editor has been “rewarding, educational and inspiring.” Admitting to a “deep dive into this process” of developing the features over the past seven months, Markle gave thanks to her friends for their support while she also named her consort, Harry, the Duke of Sussex, son of Charles, Prince of Wales, and the deceased Diana, Princess of Wales.

We are proud to announce that Her Royal Highness, The Duchess of Sussex is the Guest Editor for the September issue of @BritishVogue. For the past seven months, The Duchess has curated the content with British Vogue's Editor-in-Chief Edward Enninful to create an issue that highlights the power of the collective. They have named the issue: “Forces for Change” For the cover, The Duchess chose a diverse selection of women from all walks of life, each driving impact and raising the bar for equality, kindness, justice and open mindedness. The sixteenth space on the cover, a mirror, was included so that when you hold the issue in your hands, you see yourself as part of this collective. The women on the cover include: @AdwoaAboah @AdutAkech @SomaliBoxer @JacindaArdern @TheSineadBurke @Gemma_Chan @LaverneCox @JaneFonda @SalmaHayek @FrankieGoesToHayward @JameelaJamilOfficial @Chimamanda_Adichie @YaraShahidi @GretaThunberg @CTurlington We are excited to announce that within the issue you’ll find: an exclusive interview between The Duchess and former First Lady of the United States Michelle Obama, a candid conversation between The Duke of Sussex and Dr Jane Goodall, inspirational articles written by Brené Brown, Jameela Jamil and many others. Equally, you’ll find grassroots organisations and incredible trailblazers working tirelessly behind the scenes to change the world for the better. “Guest Editing the September issue of British Vogue has been rewarding, educational and inspiring. To deep dive into this process, working quietly behind the scenes for so many months, I am happy to now be able to share what we have created. A huge thanks to all of the friends who supported me in this endeavour, lending their time and energy to help within these pages and on the cover. Thank you for saying “Yes!” – and to Edward, thank you for this wonderful opportunity.” – The Duchess of Sussex #ForcesForChange

Before the birth of her son, Archie, there were reports that Markle planned to have a fluid approach to the gender identity of the scion of the House of Windsor. Buckingham Palace rejected the reports as false, however. During the month of June, which LGBT campaigners consider to be LGBT Pride Month, the official Instagram account for the Duke and Duchess of Sussex followed several pro-LGBT groups, including Stonewall.

Markle is not the first American spouse of a British royal to cause controversy. Maryland-born Wallis Simpson, AKA Bessie Wallis Warfield, was divorced twice before she became the lover of Edward, Prince of Wales in the 1930s. After he became King Edward VIII, Edward chose to abdicate in order to marry Simpson. Dubbed Duke and Duchess of Windsor and suspected of Nazi sympathies, the pair went into exile and spent much of the rest of their lives in France.