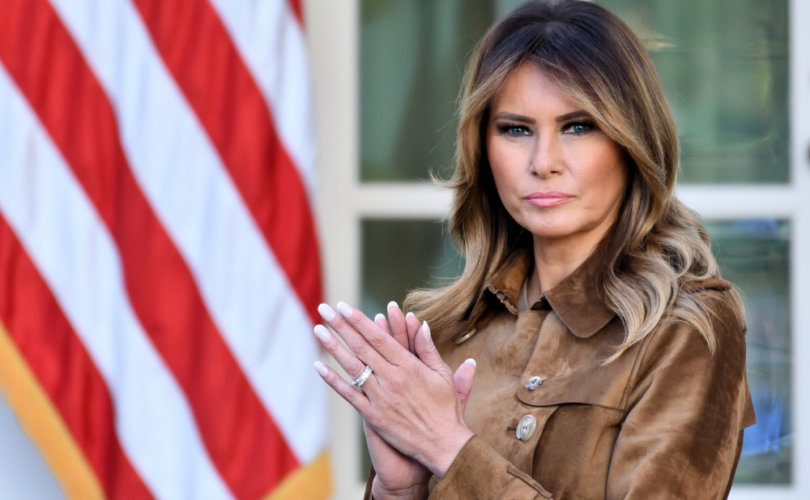 Melania Trump’s comments come in the wake of her husband President Donald Trump having his social media accounts permanently removed from social media platforms such as Twitter, Facebook, and Instagram. Trump supporters such as Sidney Powell, Lin Wood, and General Michael Flynn were also purged from Twitter as well. Mainstream conservative commentators have also reported mysteriously losing huge portions of their followers.

Melania Trump said she was “disappointed and disheartened with what happened last week,” referring to violent people who entered the Capitol building on the same day of a Save America Rally where Trump addressed hundreds of thousands of his supporters. There were five deaths connected to the event.

“Most recently, my heart goes out to: Air Force Veteran, Ashli Babbitt, Benjamin Philips, Kevin Greeson, Rosanne Boyland, and Capitol Police Officers, Brian Sicknick and Howard Liebengood. I pray for their families comfort and strength during this difficult time,” stated the First Lady about the victims.

Melania Trump condemned the violence while calling for “healing” in “our country and its citizens.”

“Our Nation must heal in a civil manner. Make no mistake about it, I absolutely condemn the violence that has occurred on our Nation’s Capitol. Violence is never acceptable,” she stated.

The First Lady also implored citizens to not use violence to solve problems.

“I implore people to stop the violence, never make assumptions based on the color of a person’s skin or use differing political ideologies as a basis for aggression and viciousness. We must listen to one another, focus on what unites us, and rise above what divides us.”

“It is inspiring to see that so many have found a passion and enthusiasm in participating in an election, but we must not allow that passion to turn to violence. Our path forward is to come together, find our commonalities, and be the kind and strong people that I know we are,” she stated.

She thanked the millions of Americans who have “supported my husband and me over the past 4 years.”

“Most importantly, I ask for healing, grace, understanding, and peace for our great Nation. Every day let us remember that we are one Nation under God. God bless you all and God bless the United States of America,” she concluded.

Catholic priest Father Jeffrey Kirby, a moral theologian and philosopher, is warning Americans who believe in God of the “dark” four years they have before them under a Biden administration that he says will commence an all-out assault on religious freedom that will especially target Christians, resulting in persecution.