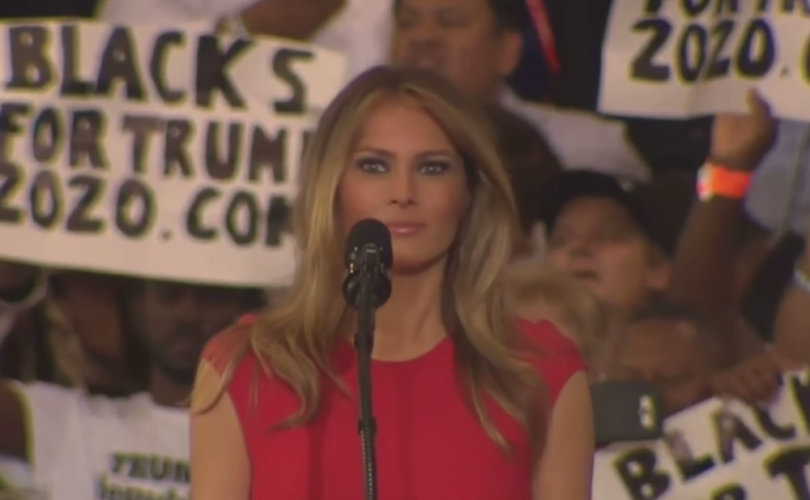 First Lady Melania Trump leads the Lord's Prayer during a rally in Florida.

MELBOURNE, Florida, February 21, 2017 (LifeSiteNews) – First Lady Melania Trump kicked off her husband’s rally on Saturday by leading the Lord’s Prayer before a large and enthusiastic crowd.

“Let us pray,” Trump began after extended cheers as she took the dais before an estimated 9,000 supporters at Melbourne-Orlando International Airport.

She then recited the Our Father, with rally attendees joining in, audibly toward the end of the prayer, that Jesus taught his disciples.

After more cheers at the prayer’s conclusion, Melania Trump introduced her husband, but she first addressed the American people and responded to her detractors.

.@FLOTUS opens her remarks with the Lord's Prayer. pic.twitter.com/z0Vk6znjL8

She told the crowd assembled in the airplane hangar about 70 miles east of Orlando that it was an “honor and great pleasure” to stand before them as the First Lady of the United States. She promised to always stay true to herself and be truthful to the American people, “no matter what the opposition is saying about me.”

“I will act in the best interest of all of you,” Melania stated. “I am committed to creating and supporting initiatives geared to my heart, which will have impacts on women and children all around the world.”

After taking the podium, President Trump said, “I didn't know that Melania was going to be saying the Lord's Prayer, but I thought that was very beautiful. Thank you, thank you.”

The backing of Trump’s supporters, many of whom waited for hours to see him, hasn’t wavered in the months since his surprise election victory over Hillary Clinton. In fact, The Washington Post reported that there is frustration among them over the way his opponents have treated him.

Demonstrating how the personal attacks extend to Trump to his family, the First Lady was savaged personally on Twitter for leading the Our Father, with insults encompassing everything from her accent and her character to her faith.

The Trumps are Christians, and the issue of President Trump’s faith was under constant scrutiny during the campaign. It was initially the object of skepticism, but then Trump reached out to people of faith. He promiseed to rescind the Johnson Amendment, met with evangelicals and appointed a Catholic Advisory Group.

After letting EWTN viewers know that prayer is very personal to him in an interview late in the campaign with the network’s Raymond Arroyo, Trump prevailed in the election among people of faith, specifically getting the Protestant, evangelical and Catholic vote.

At the close of his first month in office, religious and pro-life voters are encouraged by President Trump’s reinstatement of an expanded Mexico City Policy, which would defund the International Planned Parenthood Fund and other overseas abortion providers, and his nomination of federal appellate Judge Neil Gorsuch for the Supreme Court. Gorsuch is known for pro-life views and his record defending religious liberty.