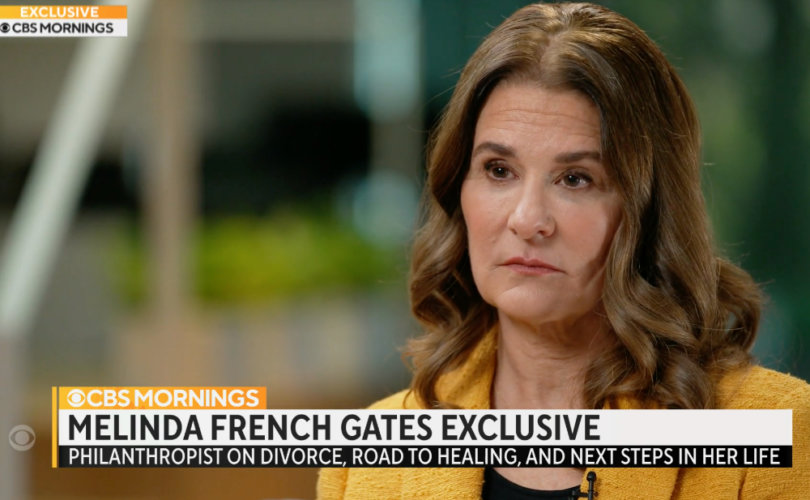 In Melinda’s first interview since her divorce proceedings from Bill Gates were announced in May 2021, Melinda shared details about her husband’s friendship with now-deceased pedophile Jeffrey Epstein.

“I made that clear to him,” said Melinda Gates.

Saying that she had also met Jeffery Epstein “exactly one time” in order to “see who this man was,” Melinda said she “regretted it from the second I stepped in the door.”

“He was abhorrent. He was evil personified,” said Melinda. “I had nightmares about it afterwards. My heart breaks for these young women because that’s how I felt. And here I’m an older woman … I feel terrible for those young women. It’s awful.”

When pressed about Bill Gates’ continued relationship with Epstein following this meeting, Melinda refused to answer, saying instead that “any of the questions remaining about what Bill’s relationship there was, those are for Bill to answer.”

She did repeat, though, that she “made it very clear [to Bill Gates] how I felt about him [Epstein].” Melinda added that the divorce took place for a number of reasons, not just for “one thing.”

Gates reportedly even took advice from Epstein about how to end the marriage, after Gates complained about his wife and described the marriage as “toxic.” The Daily Beast was informed of this by an individual who attended “dozens” of meetings between Gates and Epstein.

Gates himself told CBS News that “meeting with Epstein was a mistake that I regret deeply. It was a substantial error in judgement.”

Gates and Epstein — a little-known friendship

Questions about Bill Gates’ friendship with the convicted pedophile have been raised in recent years, as more details have come to light about the relationship between Gates and Epstein.

Gates and Epstein enjoyed a relationship lasting a number of years, with a recent Corbett Report noting how flight logs reveal that Gates actually flew on Epstein’s infamous “lolita express” plane from New Jersey to Florida, even though Gates has his own private plane. A spokesman for Gates later claimed that Gates did not know whose plane he was on.

Gates insisted in comments to the Wall Street Journal in 2019 that he did not have any relationship with Epstein at all, and a spokesman for Gates later added that Epstein had sought business relations with Gates, which Gates had rejected.

However, the New York Times reported one month later that Gates had actually visited Epstein multiple times, even starting his relationship after Epstein had been convicted of sex crimes and served time in jail for soliciting prostitution from a minor.

Indeed, the relationship seems to have been more than a passing acquaintance. Back in 2011, Gates emailed his staff describing Epstein’s lifestyle as “very different and kind of intriguing although it would not work for me.” Epstein reciprocated the relation, writing in an email that “Bill’s great,” following a meeting of several hours between the pair.

Thorbjørn Jagland, the former prime minister of Norway, also attested to the lucrative business interests which Epstein and Gates were working on together, saying that at a 2013 meeting held in Jagland’s residence, regarding vaccine production, “Bill Gates and Epstein arrived together, followed by the others.” Norwegian paper DN Magasinet noted that “Epstein, who knew Gates, was the person that introduced the billionaire to IPI [International Peace Institute],” which later partnered with Gates in the “fight against polio.”

That meeting proved particularly lucrative, as IPI has since been awarded over $8 million by the Bill and Melinda Gates Foundation.

Epstein was also linked to the billionaire philanthropist though eugenic policies. Epstein wanted to “seed the human race with his DNA,” looking to advance the policy of transhumanism: the “science of improving the human population through technologies like genetic engineering and artificial intelligence.”

This drive led him to fund research in the matter, including funding the controversial scientist George Church, who has been a longstanding public advocate of eugenicist policies and acted as scientific advisor to a group looking to eradicate disease by altering genetic codes. Funding for this came from a “group of investors led by Epstein’s appointed backup executor, Dr. Boris Nikolic. Naturally, that group of investors included Bill Gates.”

Boris Nikolic himself appears to have been an important link between Epstein and Gates, for he served as chief scientific advisor to Microsoft and the Bill and Melinda Gates Foundation, and was subsequently named as backup executor of Epstein’s will, just days before Epstein was discovered dead in his prison cell.