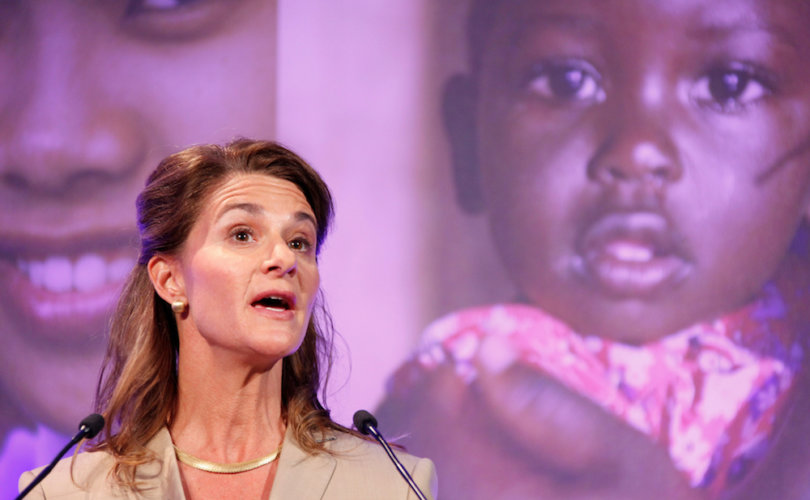 “I have really gone all in on family planning,” Gates said.

The wife of billionaire Bill Gates also portrayed birth control as necessary for women’s self-sufficiency and ability to provide for their children.

Giving a woman access to contraception and choice in timing pregnancy, she said, means “you don’t commit her to a life of poverty,” and when a woman can space births out, “she can not only feed them, she can educate them.”

In the interview with her husband at the invitation-only “Code Conference” on Wednesday, Gates also declared her intent to hasten the speed at which her charity would get birth control in the hands of women worldwide.

“What I'm trying to do is bend the curve,” she stated, according to the technology news website recode.net. The “curve” is the pace of bringing birth control access to 110 million additional women across the world. The current trend indicates it would take until 2035 to make this goal, and Melinda Gates said her Foundation is working to shorten that to the year 2020.

Despite the risks of chemical contraception and cultural mores opposing birth control in its targeted nations, the Bill and Melinda Gates Foundation has pushed heavily for years to distribute contraception in developing countries, pumping billions of dollars into its initiatives, under the guise of reducing poverty and helping women.

Melinda Gates has also publicly insisted that her contraception activism reconciles with her professed Catholic faith.

Despite claims the Gates Foundation does not support abortion, it openly funds numerous pro-abortion groups as well, including varied Planned Parenthood affiliates globally and Marie Stopes International. The Foundation has also has a close affiliation with the United Nations Population Fund (UNPFA), which has assisted with China's one-child policy.

One leading pro-life group decried the idea advanced by Gates and others that contraception is the solution to poverty, and also Gates’ departure from the fundamental teaching of the Catholic Church in her approach to philanthropy.

“Melinda Gates exhibits a short-sighted view of a much larger problem,” American Life League (ALL) President Judie Brown said. “The entire birth control mantra of the wealthy in their philanthropic efforts is akin to those who believe they can solve starvation by sending packets of food to the poor in third world nations.”

“Birth control represents a chemical assault on women and their preborn children,” Brown told LifeSiteNews. “It is not a panacea, it is a plague.”

ALL Vice President Jim Sedlak said it was heartbreaking to see Melinda Gates, raised as a Catholic, deny God’s role in creating a new human being.

“Gates’ push for universal access to family planning, along with her push for new types of contraceptives, puts all the responsibility for creating children on the man and woman and leaves God out,” he said. “The fact is that a child is created as the result of a sexual act only because God wants that unique individual created at that moment in time. If God didn’t want you and have a purpose for you, you would not exist.”

“Gates actually says, as Sanger did last century, ‘Every dollar spent on family planning can save governments up to 6 dollars,’” Sedlak pointed out. “The lie continues.”

Sedlak continued, “Our message to Mrs. Gates in 2016 is the same one Archbishop Patrick Hayes gave to Sanger in 1921: ‘To take life after its inception is a horrible crime; but to prevent human life that the Creator is about to bring into being, is satanic. In the first instance, the body is killed, while the soul lives on; in the latter, not only a body but an immortal soul is denied existence in time and in eternity.’”