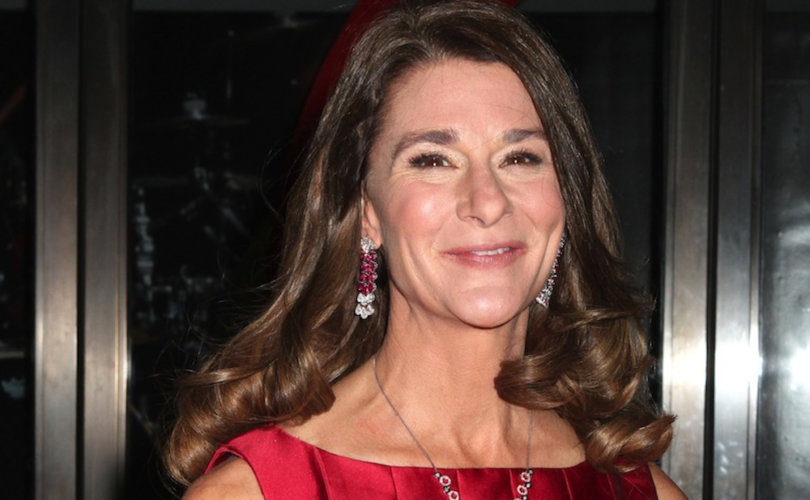 July 12, 2017 (LifeSiteNews) – Melinda Gates said she's hopeful that the Catholic Church will reverse its moral opposition to contraception but that it will “take time.”

The billionaire, who has poured millions into promoting and expanding contraception abroad, made these remarks to the BBC. Wednesday was “World Population Day” and Gates is in London co-hosting a conference expected to raise $2.5 billion to push contraception around the globe.

“We work very extensively with the Catholic Church and I’ve had many discussions with them because we have a shared mission around social justice and anti-poverty,” said Gates. “And I think what this pope sees is that if we are going to lift people out of poverty, you have to do the right thing for women. And so we have agreed at this point to disagree – “

Her interviewer cut her off, asking, “That’s a big problem for you, isn’t it, because actually culturally, the difference that could be made, if there was a change at the top of the Catholic Church, would be huge, wouldn’t it? And let’s be blunt about it. It would be a really, really big change and this pope, in spite of some people’s hopes that he would, has not made that change and doesn’t look likely to.”

The pope “hasn’t made that change yet, but I think these things take time,” said Gates. “This is an institution that does revisit. It revisited – it’s been a while since they revisited this topic – but I’m still optimistic that they might over time.”

Pope Paul VI reaffirmed the Church's opposition to artificial contraception with the 1968 encyclical Humanae Vitae. The two years during which the Church had re-studied the topic rendered the letter essentially dead in the water because of widespread speculation that the teaching would change. Now, the majority of Catholic couples flout Church teaching by using contraception, which Paul VI correctly predicted would lead to a decline in morality, a rise in infidelity, loss of respect for women, and the coercive use of reproductive technologies by governments.

Despite the deafening silence on contraception and other sexual issues by most Catholic clergy, the notion that the Church might change its teaching on contraception has until very recently been laughed off as absolutely impossible.

In June 2017, the well-respected and reputable Italian Professor Robert de Mattei said that rumors about Pope Francis setting up a commission to “re-interpret” Humanae Vitae are true.

The notion that the Church might allow Communion for the divorced and remarried without an annulment was also until very recently laughed off as a total impossibility. Then, after the release of Amoris Laetitia, numerous bishops' conferences issued guidelines implementing it that contradicted Church doctrine on sacrilege and the sixth commandment. Pope Francis has publicly approved of some of these interpretations.

Pope Francis has caused many faithful Catholics to wonder about his view on contraception by reinstating a high-ranking Knight of Malta who oversaw the distribution of condoms in the developing world. Speaking about condoms and the Zika virus, Pope Francis seemed to suggest that he approved of the use of contraception in some cases. The Vatican confirmed this is what he meant.

In February 2017, the Pontifical Academy for the Sciences hosted a conference on “biological extinction” and invited several pro-abortion, pro-population control advocates to speak. One of these presenters, John Bongaarts of the Population Council, said contraception is needed to protect the environment and touted it as a solution to male youth unemployment.

At the same conference, Bishop Marcelo Sánchez Sorondo, the Chancellor of the Pontifical Academy of Sciences, said “we don’t know exactly” what the Church teaches on procreation and that “education” will help women have one kid instead of seven.

… the Catholic Church, to whom God has entrusted the defense of the integrity and purity of morals, standing erect in the midst of the moral ruin which surrounds her, in order that she may preserve the chastity of the nuptial union from being defiled by this foul stain, raises her voice in token of her divine ambassadorship and through Our mouth proclaims anew: any use whatsoever of matrimony exercised in such a way that the act is deliberately frustrated in its natural power to generate life is an offense against the law of God and of nature, and those who indulge in such are branded with the guilt of a grave sin.