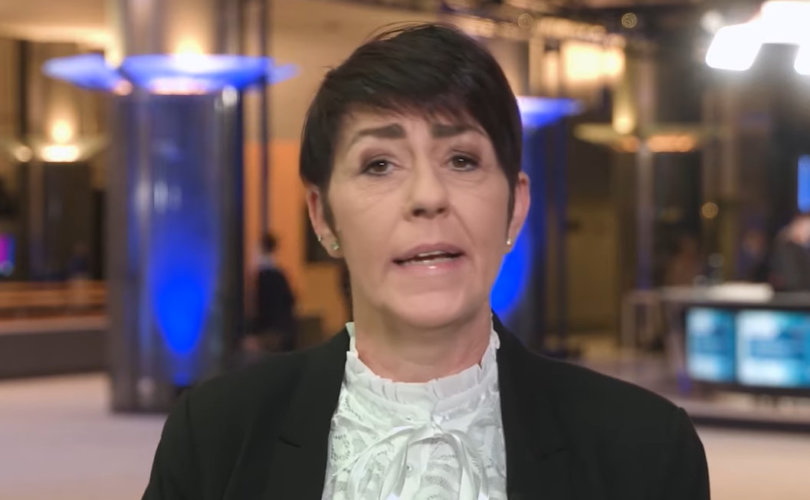 BRUSSELS (LifeSiteNews) — Member of the European Parliament (MEP) Christine Anderson has voiced her support for the Freedom Convoy in Ottawa.

“Dear Canadians,” the German MEP said, “do not give up, you are [on] the right path, and many people around the world are with you.”

Anderson called the truckers and their supporters brave, applauding their “determination to stand up for freedom, democracy and the rule of law.”

She added that the Freedom Convoy has “given hope to so many people in the world.”

Poking fun at a term used by Justin Trudeau, she said, “You have shown the world that his small fringe minority is not all that small after all.” She opined that the protest has shown the world how to deal with government overreach effectively.

She called the Province of Nova Scotia “desperate” for making it illegal to gather on highway overpasses to support the convoy.

The Freedom Convoy has inspired similar movements all over the world, one of which is set to arrive in Brussels, Belgium, where the European Parliament is located on February 14.

The Canadian trucker convoy showed us the way to freedom. And now it’s about to happen in Europe. Welcome to the European Trucker Convoy / European Freedom Convoy to Brussels.

EUROPE – Truckers and supporters from Helsinki, Belgium, France, Italy & Netherlands, this is an international protest of workers, all heading to Brussels.

The European Convoy for freedom has begun. It’s time.#FreedomConvoy2022 #TruckersForFreedom2022

Anderson begged Europeans to imitate the Canadian freedom fighters to “fight this now, before our democracies have been turned into full blown tyrannies.”

“You cannot comply your way out of a tyranny, so that’s why we need to stop it before it has fully developed.”