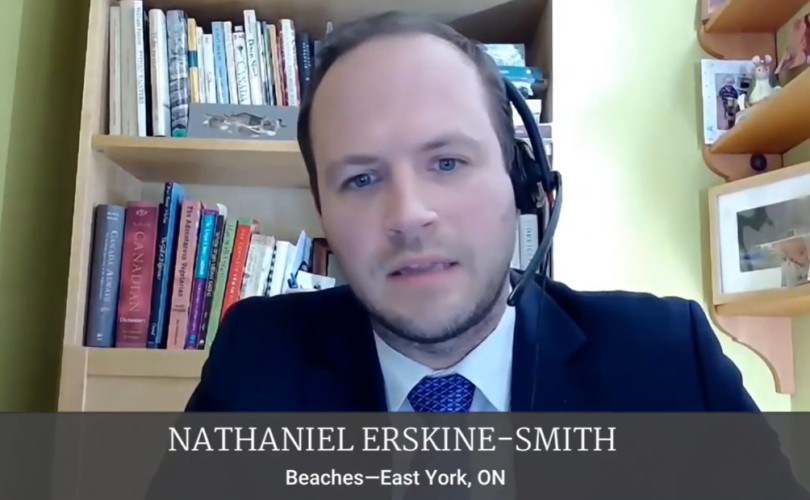 OTTAWA (LifeSiteNews) – A Liberal Party of Canada Member of Parliament said that COVID travel vaccine mandates are no longer “justified” and should end, which is in direct conflict with Prime Minister Justin Trudeau, who recently defended them remaining in place.

“I abstained on the Conservative motion to immediately revert to pre-pandemic travel measures. I didn’t support the idea of dropping masks right away, but I’ve also made it clear to the government that a two-dose vaccine mandate without accommodation is no longer justified,” tweeted Liberal MP for Beaches-East York Nate Erskine-Smith on Tuesday.

Erskine-Smith’s comments came a day after the Trudeau Liberals with the help of the NDP voted against a motion from Conservative Party of Canada (CPC) MP Melissa Lantsman calling for the return of pre-pandemic rules and service levels for travel. The motion failed to pass, with 201 against and only 112 for.

In a Twitter thread, Erskine-Smith wrote that when they first debated “these questions” at the end of February, at that time “Dr. (Theresa) Tam had indicated that a review of mandates was warranted.”

“As I noted in my reasons then, an immediate and transparent re-evaluation should have taken place at that time,” Erskine-Smith wrote.

“Nothing about the re-evaluation of travel-related measures has been transparent. It is not clear what Dr. Tam’s recommendations are, and there’s been no adequate justification provided for continuing the exclusive two-dose mandate,” he continued.

Erskine-Smith went on to say that the initial justifications for any “mandate” were to “increase rates and reduce transmission risk.”

“But the current mandate has exhausted its usefulness in reaching new people, and the impact of two doses on transmission risk is too low (especially given alternative testing options),” he added.

He then noted that his “core point” is that a two-dose mandate “no longer makes any sense.”

Erskine-Smith also noted that one of his constituents “suffered temporary facial paralysis after her first dose,” and that she feared “further vaccination but didn’t qualify for a medical exemption.”

“Should she be precluded from travelling by air/rail within Canada? Not without a compelling justification,” Erskine-Smith wrote.

“Another constituent’s mother is in Russia, already has a super visa to be here, and is vaccinated with Sputnik, which we don’t recognize. Should she be precluded from travelling to Canada to be with her family? Not without a compelling justification.”

Erskine-Smith concluded his thread by writing, “because it’s related, the delays and challenges at our airports are unacceptable. If measures don’t accomplish any public good and they contribute to delays, then there’s good reason to eliminate them.”

Only one Liberal MP, Joël Lightbound, who serves in a Quebec riding, voted for Lantsman’s motion calling for a return to pre-pandemic travel rules. However, many others, including Erskine-Smith, abstained from the vote.

It should be noted that abstaining from a vote does not mean one supports or opposes a motion or bill.

However, in Erskine-Smith’s case, he noted that the reason he abstained was due to the fact Lantsman’s motion, if passed, would have meant mask mandates would have to be dropped, something he was not yet ready to agree to.

On Tuesday, the Trudeau government said it would extend its border restrictions along with travel COVID jab mandates until “at least” June 30.

The announcement of the extension of the COVID jab travel mandates were met with disapproval from the CEO of Canada’s second-largest airline, WestJet, Alexis von Hoensbroech. On Tuesday, he said the mandates should be “dropped” right away.