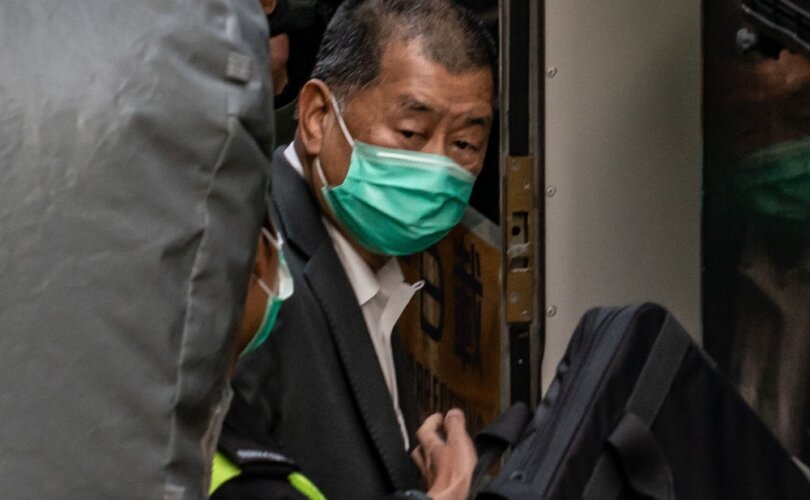 (LifeSiteNews) — Five former senior staff members of a Hong Kong newspaper together with the former CEO of its parent company pleaded guilty Monday to collusion charges for allegedly conspiring with Catholic pro-democracy publisher Jimmy Lai, who was convicted of what the U.S. State Department called “spurious fraud charges” last month by the Chinese Communist Party (CCP).

The news comes after CCP-controlled Beijing implemented its controversial National Security Law (NSL) upon former British territory Hong Kong in June 2020. Critics immediately warned the law would lead to the erosion of free speech and democratic values in Hong Kong in favor of CCP totalitarianism.

Since its imposition, the NSL has given authorities in China broad power to oversee and interpret the law, allowing them to supersede and even override Hong Kong’s own legislation. According to the BBC, “[h]undreds of protestors, activists and former opposition lawmakers have been arrested since the law came into force.”

On Monday, the Hong Kong Free Press reported that five former staff members of Apple Daily, a pro-democracy Hong Kong news outlet, as well as the CEO of its parent company Next Digital pleaded guilty after being charged with “conspiracy to commit collusion with a foreign country or with external elements to endanger national security.” The charge carries the possibility of life imprisonment.

The charges are traced to the former staff members’ collaboration with Apple Daily founder and Catholic pro-democracy publisher Jimmy Lai, 74, who was arrested in December 2020 for alleged violations of the NSL before being released on bail. He was later convicted of fraud in late October of this year. The fraud verdict was immediately condemned by the U.S. State Department, 16 U.S. senators, and the international Committee to Protect Journalists.

On October 26, the State Department said it is “deeply concerned about the deterioration in protection for human rights and fundamental freedoms and the systematic dismantling of Hong Kong’s autonomy under the National Security Law (NSL),” including China’s “increased efforts to wield the NSL to suppress independent media, to silence dissenting views, and to stifle freedom of speech.”

According to the Hong Kong Free Press, prosecutors in the case against the six former senior staff members of Apple Daily and Next Media are claiming that Apple Daily had published “content purporting to be news articles,” including 161 pieces of “impugned content” since April 1, 2019, which they said had been crafted to “sway public opinion.”

The outlet reported that Apple Daily allegedly made “seditious statements against the central and Hong Kong governments and [called] for the public to participate in protests,” according to the prosecution.

The six men have been in custody since last year and are slated to face sentencing after Lai’s trial, set to begin Thursday. Lai has been charged with three crimes under the National Security Law connected to his alleged “collusion with foreign forces,” as well as one alleged violation of Hong Kong’s sedition legislation that dates to the city’s colonial governance, the outlet reported.

Prosecutors say some of the former senior staff members will testify against Lai in court.

China expert Steven Mosher, president of the Population Research Institute (PRI), blasted the NSL and the punishment of the pro-democracy media members in a Tuesday email to LifeSiteNews.

“Hong Kong’s National Security Law is so broadly written, and so draconian in its punishments, that it is clear that [its] real purpose is to terrify the people of that once-great city into silence,” Mosher said. “I have no doubt that the corrupt prosecutors in the case threatened the defendants with life imprisonment if they did not plead guilty. Since the court would have found them guilty in any event, they essentially agreed to a plea bargain to get a shorter sentence.”

“This case, and Jimmy Lai’s, mark the definitive end of the rule of law that the British left in place during the 1997 handover,” Mosher continued. “Hong Kong’s people are now living under the same brutal, one-party dictatorship that their cousins across the border have endured for over 70 years.”

Moves to prosecute members of the pro-democracy Hong Kong media come after Apple Daily published its last publication in June 2021, just after police officers executed a raid on its newsroom and arrested senior executives, the Hong Kong Free Press reported.

According to the outlet, the June raid marked the second time in 10 months that police had searched the newsroom but the first time “authorities cited media articles as potentially violating the national security law.”

Those who have fallen prey to China’s anti-democratic law include Cardinal Joseph Zen, the Catholic former bishop of Hong Kong.

Zen was arrested earlier this year for allegedly violating the NSL in connection with the establishment of the now-defunct 612 Humanitarian Relief Fund, which offered legal and financial assistance to pro-democracy activists, LifeSiteNews reported.

The cardinal has pleaded not guilty to the charges lodged against him.

In May, Cardinal Charles Bo of Yangon, Myanmar, blasted Beijing-led authorities in Hong Kong for abandoning “freedom and justice” and turning “one of Asia’s freest and most open cities into a police state.”