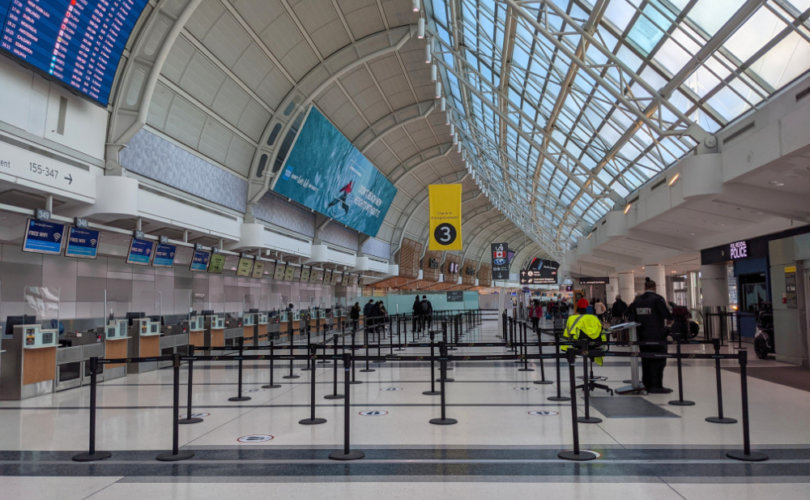 According to documents acquired by Blacklock’s Reporter under access to information requests, Department of Transport lawyers gave direct instructions on how airlines could challenge religious claims.

“Leaders and members of many religious and religious denominations have released public statements indicating their support for the Covid-19 vaccine,” the memo said.

“Religion typically involves a particular and comprehensive system of faith and worship as well as the belief in a divine, superhuman or controlling power. ‘I don’t believe in vaccination’ would not in itself be a reason.”

Another memo stated it is not “sufficient for the passenger to state they have a certain religious belief and they cannot be vaccinated.”

“They must explain how vaccination would conflict with their religious belief in a way that is not trivial or insubstantial, meaning being vaccinated conflicts with the genuine connection with the divine.”

Transport Canada’s memos show that the department told airlines to combat so-called “false” beliefs around the COVID injections’ effectiveness or rationale for use.

“There are a number of false empirical beliefs about the development, the contents, effects or purpose of the vaccines … These are not, however, grounds on which a temporary exemption can be granted,” the memo stated.

“For example, a conviction the Covid-19 vaccine contains aborted human or animal fetal cells or that DNA is altered by mRNA vaccines is empirically incorrect and should not be used as a rationale for the granting of a religious exemption even were this belief is sincerely held or rooted in religion.”

The fact is, the COVID-19 injections approved for emergency use in Canada, and which are still in an experimental trial phase, including the Pfizer jab for ages 12 and up, all have connections to cells derived from aborted babies.

Also, all of the COVID jabs approved for use in Canada are still experimental, with clinical trials not being completed until 2023.

Sayeh Hassan, who serves as a lawyer for the Calgary-based Justice Centre for Constitutional Freedoms (JCCF), told LifeSiteNews last month that “Canadians have the right to medical privacy, a right that has been upheld by the Supreme Court of Canada.”

On June 20, the Trudeau government “suspended” the COVID jab travel mandate after pushback from within his own Liberal Party as well as from industry groups and Conservative Party MPs.

However, unvaccinated foreign nationals are still barred from entry into Canada, the government claims, “because vaccination rates and virus control in other countries varies significantly.

Last August, the Trudeau government announced that all air, rail, and sea travelers would have to have the COVID jabs or be barred from travel. Those who were jab-free would not be allowed to board a plane, even if they had a negative COVID test result.

The rule went into effect in December 2021.

Even legitimate exemption claims were challenged

Department of Transport lawyers even went as far as to make it so that those with legitimate claims were hassled, the memos show.

A confidential November 22-titled memo Federal Vaccine Mandate: Guidelines On Requirements noted that, “In other words a temporary exemption by one airline does not automatically allow the passenger to connect with a different airline or to transfer modes, e.g. from train to plane or from one airline to the next.”

The coaching of airlines from government lawyers came despite a 2004 Supreme Court decision where judges ruled 5-4 that the government “is in no position to be, nor should it become, the arbiter of religious dogma.”

This decision came from the case of Orthodox Jewish tenants at a condo in Montréal. They were accused of breaking laws after installing a prayer area on their balconies.

As of today, the Department of Transport has not yet said how many passengers requested and rejected religious exceptions for the COVID jab travel mandate.

However, data from federal departments show that only 26 percent, or 540 out of 2,042 requests, for religious exemptions were approved.

In an October 8 memo to managers titled Managers’ Toolkit For The Implementation Of The Policy On Covid-19 Vaccination, the Treasury Board wrote that “the validity of the belief itself must not be challenged.”

“The requirement is to focus on the sincerity of the individual belief rooted in religion not whether it is recognized by other members of the same religion.”

The Trudeau government has been pushing the COVID injections on the Canadian populace and has even used questionable tactics to achieve high vaccination rates.