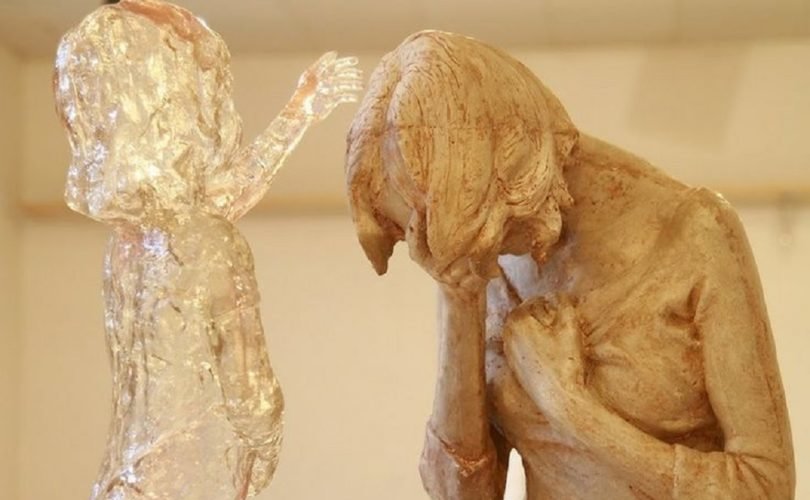 October 22, 2015 (LifeSiteNews) – Awareness of a five-year-old work of art created to commemorate the unborn and offer hope for redemption to post-abortive mothers continues to grow and touch hearts.

The artist behind the piece, Slovakian sculptor Martin Hudacek, was able to present a replica of his Memorial for Unborn Children to Pope Francis during a recent Wednesday audience in Rome.

The sculpture portrays a mother in tremendous sorrow, mourning her abortion, her face buried in her hands. She is approached by another figure, her aborted child, as ayoung child. Her child comes to her in a remarkably touching and healing way, placing a hand on her head, emanating forgiveness.

The work has garnered praise for its effective depiction of post-abortion suffering, communicated sensitively, and the significant emotion it elicits continues to draw attention.

“The inspiration is from the Holy Spirit,” Hudacek told LifeSiteNews while in Rome to meet the Holy Father.

Memorial for Unborn Children's message of healing, mercy, and forgiveness applies beyond those directly impacted by post-abortion syndrome. Hudacek has also said it expresses hope given to believers by Christ, Who died on the cross for us, showing how much He cares for us.

Dan Zeidler, president of Family Life Council, Inc., has been working with Hudacek to build even more interest so the piece can facilitate post-abortion healing. The project is especially timely with the upcoming Year of Mercy declared by Pope Francis.

Zeidler accompanied Hudacek to present the replica at the end of the Holy Father's October 21 general audience.

“We were in the first row,” Zeidler told LifeSiteNews. “When he came to us, I spoke to him in Spanish, saying that this [Martin] is the sculptor who did this work for you. It is a work that captures post-abortion pain, forgiveness, and mercy.”

Zeidler then shared with the pope that the sculpture was a gift from Hudacek and Proyecto Esperanza (Project Hope), a post-abortion assistance program approved by CELAM (the Latin American Bishops' conference) throughout Latin America.

Hudacek told LifeSiteNews it was a friend who told him few years back, while he was still a student, that he must create a sculpture to honor the unborn.

At first he didn't know why, but the thought lingered with him.

“This stayed on my heart,” Hudacek recalled.

He didn't anticipate the sculpture getting so much attention, but the reaction has shown him why he was called to create it.  “Now I know why.”

When the young Slovakian artist embarks on a work, he said he “must do much praying,” and he also asks others to pray for him.

“First is necessary praying,” he said.

It's the foundation for his approach, after which he lets the Holy Spirit guide the process.

Hudacek had heard about post-abortion syndrome from a lot of people, and eventually he began to grasp how widespread post-abortion pain is.

“This is not something simply from his thoughts,” he said. Post-abortion pain “is really a problem, and it is communicated in the sculpture.”

The piece's design was not a clear idea for Hudacek at first. He looked at other monuments while researching, but examples of monuments to the unborn were not to be found.

He spent a lot of time on the mother's pose after talking with many people about a mother's post-abortive pain.

Many mothers, women and girls, suffering with post-abortion syndrome expressed to him that they were hurt, listing ways they had tried to heal, but regardless, one thing was always missing.

“'I need only forgiveness,' they told me,” said Hudacek. “This is necessary for new life.” He then asked himself, “What is forgiveness? Is it something physical? What does it mean?”

Hudacek told LifeSiteNews that the answer continued to elude him. So he called upon God again to lead him, and the response he received told him to simply set about creating the piece.

It's been an interesting time for Hudacek, since he's gotten international attention for his work and been able to touch so many people in such a crucial way.

In January of this year, Elizabeth Bunster of Chile, Proyecto Esperanza's international coordinator, was also able to speak with Pope Francis at a general audience about post-abortion pastoral efforts. She shared a photo of the sculpture with him at that time.

Pope Francis said to Bunster that he carried the concern of post-abortion healing in his heart, and he told her to keep working on these efforts.

Hudacek has since completed another sculpture, this one of a post-abortive mother, her child, and also the father.

“The story continues,” stated Hudacek. “This is not only a women's problem. It is also a man's problem.”

Hudacek considers himself a simple man, who just wants to work and support his wife and family.

But he's happy to be an instrument for Holy Spirit to impart healing for so many people devastated by abortion, and he does feel passionate about sharing the message that life is precious, something that should be protected.

“The message is relevant around the world,” he told LifeSiteNews. “People are praying.”

As Hudacek walked in Rome while there to present the replica, people would stop him when they saw it, remark on it, some asking to take a photograph of it.

“Now I know it was not only a good idea, but good work, because it's helping people spiritually,” said Hudacek. “This is enough for me.”

Martin's portfolio can be viewed here.

For more information on the sculpture and to download the image: www.4life4family.org/sculpture