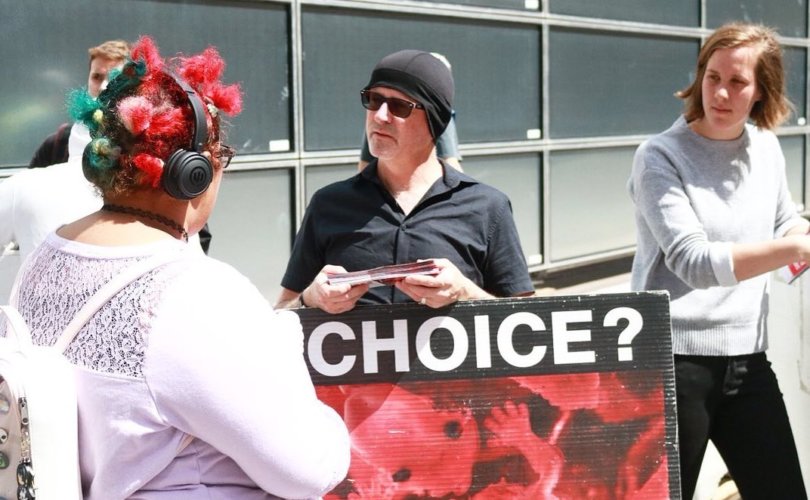 October 24, 2019 (LifeSiteNews) — Pro-life men are often told that they have no right to talk about abortion. However, when pro-life activist Jonathon van Maren was confronted by a group of college girls saying just that, he responded in a way that disarmed their objections, and led to their conversion to the pro-life worldview.

Van Maren recounted the story this week on The Van Maren Show, during a discussion with Human Rights Education Organization founder and president Jason Jones.

Watch Jonathon telling the story in the video below, starting at 31:25:

“I really want to figure out how we can better speak to men who have pro-life convictions or at least sympathies, but don’t feel like there’s a place for them in the movement,” Van Maren said, “because all they hear from the pro-choice world is ‘you’re a man, sit down and shut up.’”

“And even in the pro-life movement, to a degree, sometimes they get this idea that, well, they’re not wanted because they’re a male and their voice is somehow less valuable.”

Van Maren disputed those assumptions with an anecdote about bringing the pro-life case to a college campus in Florida. While there, he was confronted by several female students.

“They came up to me and and they were like, ‘you’re a man, so what do you have to say about this issue?’” he recalled. To which he responded by pointing out that his message is that men need to do more to stand by their partners, so women don’t feel pressured into getting abortions that they don’t want.

“The vast majority of abortions happen because the man wouldn’t stand up and say, ‘I will be there for you and that child no matter what,’” he observed. “The Guttmacher Institute’s own statistics indicate that just over 60 percent of abortions happen because of some pressure from outside, which means that well over 50 percent of these abortions are not taking place because the woman who is already developing an attachment to the child wants it, but because somebody, often the man, is pushing for it.”

His answer got past the girls’ defensiveness, Van Maren says, leading to a half-hour conversation. “I just said, ‘Look, I think that one of the reasons women have abortions is because men aren’t standing up for their children. If either they’re being passive and saying it’s up to you or they’re being aggressive and saying you need to abort this baby, we don’t want to ruin our lives,’” he continued. “And within a half an hour of conversation, all three of them changed their minds and became pro-life.”

The exchange, he said, exemplified an argument that only a male pro-lifer could have made effectively, because “only a guy can really go after guys to girls” and “explain that men are a huge part of the problem,” which means “men have to be a huge part of the solution.”

The task facing pro-lifers, Van Maren declared, is determining how the movement can “start impressing that on people, on men with pro-life sympathies or convictions who are being persuaded by the culture and this attitude that it’s not their issue to sort of sit on the sidelines and let this carnage continue.”