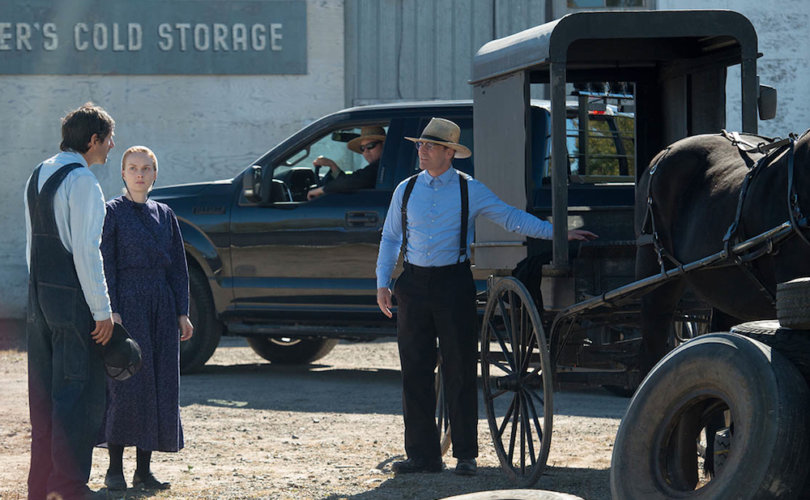 A scene from from the CBC show Pure

TORONTO, Ontario, January 17, 2017 (LifeSiteNews) – A new CBC crime drama based on real-life drug trafficking by Mexican-born Mennonites in Canada has triggered indignation and at least one complaint to the Canadian Radio-television and Telecommunications Commission from members of the mostly quiet, law-abiding group of Anabaptist Christians.

Some Canadian Mennonites emigrated to Mexico in the 1920s and their descendents did return recently, bringing and selling illicit drugs. But the new series “Pure” from the CBC excludes Mexicans from the story.

The series title is a double entendre referring on the one hand to the Mennonite effort to avoid worldly contamination by modern culture and on the other to refined street drugs. One scene shows Canadian-born and raised Mennonite women, wearing white bonnets, bagging drugs for street sales (and improbably labeling them in Old German type). The protagonist is a Canadian minister coerced into becoming a reluctant drug lord.

Sheldon Johnston, a member of the Mennonite Brethren (one of two dozen different Mennonite fellowships in Canada), filed a complaint with the CRTC about “Pure” after seeing the first episode.

“As a Mennonite and former clergyman,” he told the CRTC, “I am deeply offended by the inaccurate and gratuitous portrayal of Mennonite culture. The Mennonite faith is not one of violent, sex-abusing, law-breaking, drug-running criminals. There are no historical examples of any clergy participating in the drug trade. Not one. The churches have never been beholden to the ‘Mennonite Mob,’ nor any members of a criminal enterprise.”

Johnston told LifeSiteNews he is concerned that Old Order Mennonites who wear distinctive dress like that of characters in the series might run into difficulty getting jobs or renting homes based on public perception from the show.

“The CBC is bound by a conduct code that says it cannot misrepresent an identifiable group in a way that exposes it to hatred or contempt,” Johnston said.

He added that opinion among Mennonites is split between those who see the show as mere entertainment, riddled with amusing factual errors, and those who are upset.

Dan Dyck, the communications director for the Mennonite Church Canada (another one of two dozen fellowships) based in Winnipeg, agreed.

“Half the people are reacting with righteous indignation,” he said, “and the other half admit every community has some bad apples.”

Dyck told LifeSite that his organization was working on several statements. One is to advise outraged members how to respond and another advises the CBC how the MCC leadership feels about “Pure.” Dyck cautioned against mixing up one Mennonite group with another.

Some critics of “Pure” say this is exactly what its writers or producers have done, more or less intentionally. Mennonite historian Sam Steiner reports that the first episode portrays the fictitious Mennonite group with the accents of the Low German Mennonites, who did welcome Mexican expatriates bearing drugs, but also with the horse-drawn buggies of Old Order Mennonites, who did not. And it inaccurately portrayed the women as Amish who wear the distinct white bonnets and men who wear Amish straw hats.

“I guess it makes a certain kind of visual statement, but only the Old Order Mennonite and Amish groups still use this form of transportation, and their history has no relationship to Mexico except for the most recent decades when some Amish school teachers have provided some assistance to Old Colony Mennonite schools.”

Perhaps more seriously, the protagonist “Noah Funk’s ‘sermon’ was wrong on many levels. It must always be tied to scripture, even if trying to make the point about God living within us that he did,” Steiner added.

As for the scene where the group’s womenfolk package drug bags, Steiner says it “is not possible. Married women don’t work away from home. … That scene was strictly for looks.”

Noah Funk’s unfamiliarity with modern technology is also strictly for effect. All of the groups conflated by the drama — Old Order, Low German, and Amish — use cell phones, says Steiner, though some draw the line at smart phones.

Royden Loewen, history professor at the University of Winnipeg and chairman of its Mennonite Studies program, has also complained about “Pure.” After watching the first episode, he commented, “As a spectator, I was mildly entertained. As a Canadian who loves this culturally diverse country, I was troubled. As an historian who has written extensively about both the Old Order horse-and-buggy Mennonites of southern Ontario and the Low German Mennonite migrants from Mexico, I was deeply dismayed.”

Loewen went on, “It gets many things wrong: the accents, the names, the dresses, the theology, the very buggy used, the church architecture, the very notion of the existence of a ‘colony.’”

Loewen called the basic premise of the show “highly problematic” — that a “drug smuggling ring involving fringe elements (no longer linked to the church) within the Low German-speaking Old Colony Mexican Mennonite immigrant community” can be associated for dramatic purposes with “Pennsylvania Dutch-speaking Old Order Mennonites” who have resided peacefully in southern Ontario for 150 years.