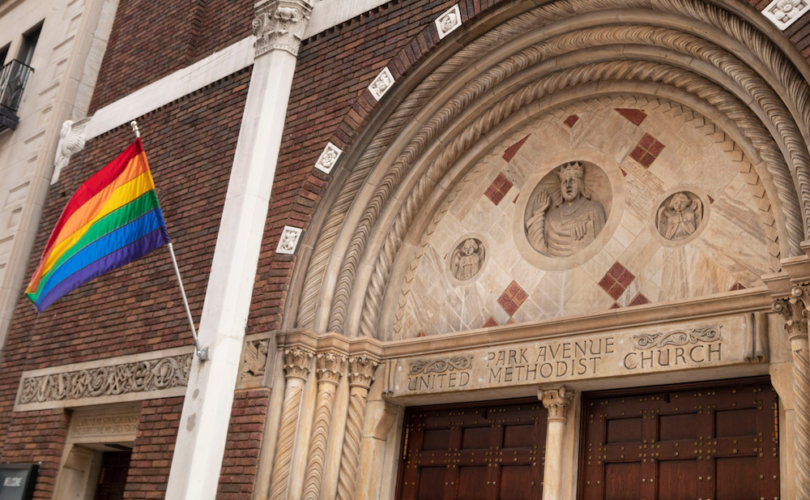 (LifeSiteNews) – A United Methodist church in the Florida recently allowed a drag queen who is also a seminarian to assist at its service and give a sermon on “acceptance.”

On October 2, Allendale United Methodist Church in St. Petersburg, Florida, hosted a drag queen during its Sunday service, allowing him to preach a sermon and join the ministers at the altar to assist during the service. The drag queen, dressed like a demon, preached on defeating “systems of oppression” in society and Christianity in order to truly “love one’s neighbor as oneself.”

“We are here to learn and to grow and to deconstruct and to reimagine what church can be, who church can be for, and how church can feel together,” the drag queen, Isaac Simmons, said in his sermon, in which he used gender neutral language to describe God while calling for Christians to be more “accepting.”

“[Church] can be a place unafraid to denounce queerphobia, a place unafraid to name the sin of racism, and to call for an end to white supremacy,” he said. “A place where all have equal and equitable access not just to the pulpit itself, to the sanctuary, but to God themself, and all that it represents within the community.”

Simmons, who goes by the name of “Ms. Penny Cost” – a blasphemous allusion to Pentecost and the Holy Spirit – when dressed in drag, is currently in the process of seeking ordination in the United Methodist Church, enrolled as a first-year seminary student at Boston University School of Theology. He lives his daily life as Isaac Simmons, using “they/them” pronouns and “she/her” pronouns when performing in drag.

“I am 24-years-old and a seminary student over in Boston,” he said in his sermon. “I play Dungeons and Dragons in my spare time, and I am a candidate for ordained ministry.”

“That’s right,” he continued, laughing hysterically. “They’re going to give me a church one day!”

Simmons said that he defined drag as “any act which intentionally bends the traditional view of self and others” and that he believed that drag was the beginning of the renunciation of so-called “systems of oppression” in society, as well as in the Methodist church.

Simmons also blasphemously compared the discontent of people who identify as LGBT to the sufferings of Jesus Christ in His Passion.

During the service, the pastor, Rev. Andy Oliver, called the church’s children to gather at the front of the church to meet the drag queen while he attempted to quote from Romans 12:2.

“One of the things that I think is great about Ms. Penny Cost is that she [sic] reminds us that we follow a God who calls us to not conform to things of this world,” said Oliver. “That we’re supposed to be transformed by the renewal of our minds. And that means that what I think today may have to change tomorrow if I continue to renew my mind.”

“It’s so cool that we serve a God that calls us to continue to grow and continue to change into something new, and to not be bound by the ways that the world confines us sometimes;” Oliver went on, “that we’re supposed to live differently.”

Conservative political and cultural commentator Ian Miles Cheong posted a clip of this interaction on Twitter.

“This is absolutely not Christianity,” he tweeted. “It is a perversion.”

Conservative political commentator Matt Walsh also responded to this performance in a YouTube video, calling the minister an “apostate preacher” and calling him out for “hideously mangling” and failing to understand the meaning of Romans 12:2.

In the Letter to the Romans, Saint Paul explicitly condemns homosexual behavior as “shameless acts” and “unnatural relations” that lead to “due penalty.”