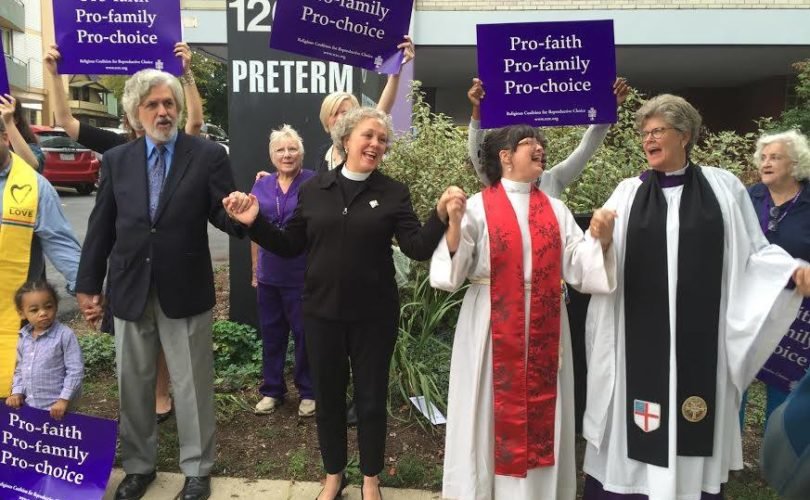 The “blessing” of the Preterm facility was initiated and coordinated by Rev. Laura Young, a Methodist priestess and the executive director of The Religious Coalition for Reproductive Choice’s (RCRC) Ohio chapter.

“Bless this building,” prayed Rev. Tracey Lind, Dean of Cleveland's Trinity Episcopal Cathedral, at the abortion facility. “May its walls stand strong against the onslaught of shame thrown at it. May it be a beacon of hope for those who need its services.”

RCRC is based in Washington, D.C. Its national president, Rev. Harry Knox, participated in the Cleveland demonstration as well, and told the Columbus Dispatch, “I’m here today standing alongside my fellow clergymen and clergywomen to say, thank God for abortion providers.”

Knox is a “married” homosexual who has also spearheaded same-sex “marriage” efforts in Georgia and Florida.

The group held signs that said to be pro-abortion is to be “pro-family” and “pro-faith.”  Other signs read, “Good women have abortions.”

Posted by Religious Coalition for Reproductive Choice on Thursday, October 8, 2015

One demonstration participant, Molly Marvar, had positive things to say about her abortion at the Cleveland Preterm clinic, calling her abortion a great, caring experience, and a privilege. “It was a defining moment for me,” she said.  “It’s really important to me that I speak up about my abortion to help other women.”

“There is a reverence for life that happens in this clinic,” Marvar told Think Progress.  “And the decision to get an abortion is often a really, really, spiritual decision.”

In an interview with Think Progress, Young explained that she believes God supports abortion.

“Women who have had abortions are being attacked at a religious level, and the faith community has a moral obligation to heal these spiritual wounds,” she said.

Young, a self-described “progressive theological thinker and a feminist,” said if her demonstration and “blessing” is successful, her group will bless other state clinics as well.  She recently testified against a pro-life bill in the Ohio senate, along with Unitarian, Universalist, United Church of Christ and Episcopalian clergy.

Young also recently led the invocation for the Ohio House of Representatives. She was assigned to lead Ohio's RCRC by her Methodist bishop, Gregory Palmer.

Young says pro-lifers are exercising a “misguided faith” when they peacefully tell women entering Preterm that there is a better way, according to the National Right to Life. Rather, Young insists that pro-lifers are “hurling hate and judgment” on women who have abortions. Young rhetorically asks, “Is that loving?”

However, the Very Reverend Jason Kappanadze, priest of Holy Trinity Orthodox Church in Elmira Heights, New York, differs with Young. “The Church never judges people, but judges actions,” he explained. “We do, however, tell the truth, to help people discern the godly, loving path.”

“How far we have strayed from true understanding, when we characterize an attempt to save lives as hateful, and characterize the taking of life as loving?” he asked.

“To tamper with the creation of human beings by God – intentionally and by His loving will – is an example of human arrogance and hubris, and is indicative of a loss of fundamental reasoning and the understanding of life.”

Kappanadze says he sees the Religious Coalition for Reproductive Choice as emblematic of a deeper problem. “The growth of the acceptance of abortion is parallel to the loss of direction of many Christians, who can no longer call people to repentance because of their division,” he said. The division of Christians, he said, “prevents them from speaking with one voice, as it was in the beginning of the Church.”