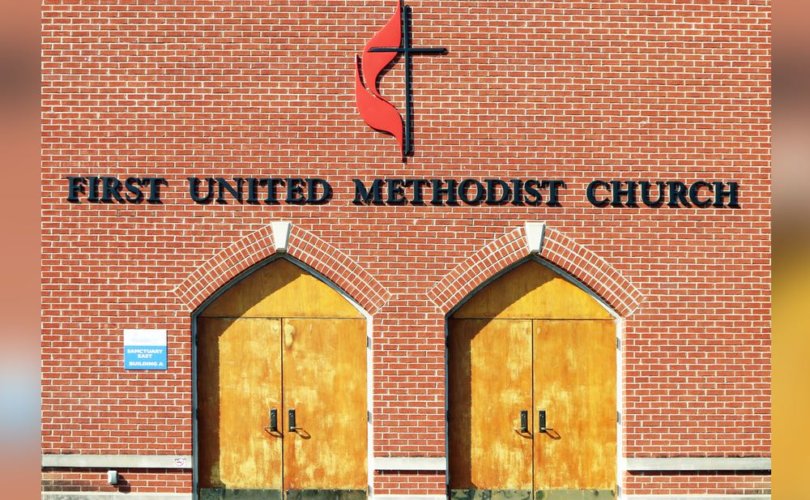 MISSOURI, March 1, 2019 (LifeSiteNews) – The United Methodist Church made history this week when it voted against a plan that would have paved the way for gay “marriage” and clergy.

At their General Conference in St. Louis, Missouri, Methodist delegates from around the world defeated the “One Church Plan” – which had been favored by the majority of Methodist bishops and theological liberals – 438 to 384.

By voting to uphold the definition of marriage as the union of a man and a woman, the Methodist Church, which has over 12 million members, has distinguished itself as the only mainline Protestant church to not go down the path of normalizing homosexuality.

Choosing instead the “Traditional Plan,” delegates also signalled their support for sanctioning clergy who disobey the same-sex “marriage” and LGBT clergy prohibitions.

While half of the Methodists’ members are Americans, most of the rest live in Africa, where the denomination enjoys impressive growth, adding about 100,000 members annually. It was the African delegates who brought overwhelming support for the Traditional Plan.

Homosexual and other progressive delegates, many of whom stood out because of their rainbow scarves, expressed disappointment with the Traditional Plan. A hundred or so “Open Plan” advocates staged an impromptu protest in the lobby of the hall after the measure was defeated.

Observers on both sides of the contentious vote noted the immense significance of the move.

“History…was made yesterday because the United Methodist Church, the only one of those mainline churches not to normalize homosexuality, voted to uphold biblical standards of sexual morality, the historic teachings of the United Methodist Church consistent with 2,000 years of church history defining marriage exclusively as the union of a man and a woman,” declared Albert Mohler, President of Southern Baptist Theological Seminary and one of the most influential voices in Evangelicalism, on Wednesday.

“In St. Louis, Missouri, a major mainline Protestant denomination in the United States said ‘No’ to the sexual revolution,” said Mohler, adding, “It has never happened before…We had better pay close attention.”

“All the forces of institutional USA United Methodism were arrayed behind the One Church Plan,” observed Mark Tooley, President of the Institute on Religion & Democracy. “But USA evangelical and overseas delegates together were an insurmountable majority. As the USA church declines and continues to lose delegates in favor of Africa, overturning the church’s marriage teaching becomes increasingly unlikely.”

“Many mainline denominations stateside have exerted tremendous pressure on churches overseas to give up the 2,000-year-old understanding of the Bible and morality for the new sexual heresy,” noted Breakpoint’s John Stonestreet. “In doing so, they’ve been guilty co-conspirators with progressive governmental activists of a kind of ideological colonialism.”

The move to block the normalization of homosexuality is seen as the climax of a tense standoff between liberal and conservative forces within the United Methodist Church (UMC).

Many are predicting a schism will result from the vote, with the coming divorce between orthodox and left-wing factions seen as inevitable.

“Baked into the UMC from its inception was a theological divide between liberals who controlled the denomination’s institutions and conservatives who filled most pews and many pulpits,” observed Jacob Lupfer, reporting for Religion News Service. “This mismatch showed up in disagreements over the UMC’s social witness on issues including the war in Vietnam, military ethics and intervention more broadly, abortion, environmentalism, feminism and, finally, questions related to homosexuality.”

The United Methodists have nonetheless gone forward together, even as the unifying trend collapsed and Presbyterians, Lutherans, and Anglicans divided and sorted into different denominations according to their theology.

“The new, LGBT-affirming Methodist group will be small yet mighty, and it will overnight become the most progressive denomination in the United States,” predicts Lupfer, who foresees a realignment of Protestant denominations.

Lupfer believes the likely schismatic pro-LGBT Methodists will “forge new coalitions and pursue [their] version of social holiness without hindrance by American conservatives or by the African United Methodists whose beliefs it has so long abhorred,” resulting in “fascinating merger possibilities with Lutherans, Episcopalians or others.”

While the expected split may see the dividing line drawn between the wealthy American and the poorer African Methodist churches, the Africans are stalwart in their support of traditional Biblical morality, despite the threat of a loss of financial support.

“Africans are not children in need of western enlightenment when it comes to the church’s sexual ethics,” declared Dr. Jerry Kulah, Dean of Theology at the United Methodist University in Liberia, during a presentation at the UMC convention. “We do not need to hear a progressive U.S. bishop lecture us about our need to ‘grow up.’”

“The vast majority of African United Methodists will never, ever trade Jesus and the truth of the Bible for money,” affirmed Kulah, who also noted that in contrast with the UMC in the U.S., “the Church in Africa is growing in leaps and bounds because we are committed to biblical Christianity.”