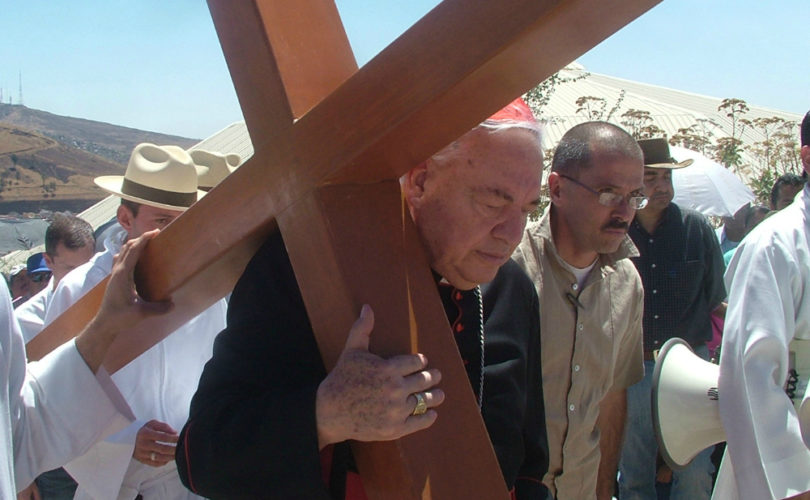 June 30, 2015 (LifeSiteNews) – Cardinal Juan Sandoval Iniguez, the retired archbishop of Guadalajara, has been made the subject of multiple criminal complaints by homosexual activists following a televised speech in which he denounced the Mexican Supreme Court’s recent declaration nullifying state laws restricting marriage to a man and a woman, according to Mexican media sources.

In his weekly video address broadcast on the Catholic television network Mariavision last week and redistributed widely on the internet, the cardinal denounced the definition of marriage embraced by the court as “deviant” and a “perversion” of the true nature of marriage, words that describe the Catholic Church’s doctrine on homosexual acts.  He also lamented the lack of opposition from Catholic bishops, and theorized that the impulse to redefine marriage is an attempt to destroy the institution as part of a larger plan to establish a “new [world] order” and a single global government.

“Anything outside of this divine institution [of marriage] is an attack against it and is an aberration, and cannot be acceptable to a Catholic,” said Sandoval.

In response, a coalition of at least twelve homosexual organizations has filed criminal complaints with two government agencies claiming that the cardinal’s words are “discriminatory” and “incite violence” against homosexuals.

The cardinal “with his declarations is fomenting homophobia and transphobia,” said Carlos Becerra of the Diverse Union (Unión Diversa), one of the groups filing complaints, in an interview with the Spanish news agency EFE.

“The cardinal thinks that marriage between people of the same sex isn’t a matter of human rights, but human rights are for everyone,” he added.

Mexico’s left-wing Milenio newspaper reports  that another homosexualist group, the Cohesion of Diversities for Sustainability (CODISE), plans to file a complaint against Sandoval with the federal Secretariat of Governance, as well as against the seminary of Guadalajara because they “give a talk that incites hatred and discrimination and that generates confusion among heterosexual parents regarding the rejection of their homosexual children, and creates a repressive and suicidal mentality in their homosexual children.”

This is not the first time Cardinal Sandoval and other Catholic prelates and institutions have been threatened with legal action for daring to defend the Catholic Church’s doctrines regarding the immorality of homosexual acts and the nature of the marriage bond.

In August 2010 Sandoval publicly accused Marcelo Ebrard, then the Chief of Government of the nation’s capital, of having “fattened” the Supreme Court with benefits so as to secure rulings in favor of his anti-life agenda, which included abortion and homosexual “marriage.” Ebrard repeatedly threatened and then initiated legal action against Sandoval, using his own personnel to prosecute him on four charges. Ebrard also threatened the spokesman for the archdiocese of Mexico City, Hugo Valdemar, with legal action for stating that the city’s abortion regime was more murderous than narcotraffickers, because it had killed more people. The charges against Sandoval and Valdemar were found to be baseless in a verdict given in 2014, and Ebrard was required to pay all of the legal fees of the archdioceses of Guadalajara and Mexico City.