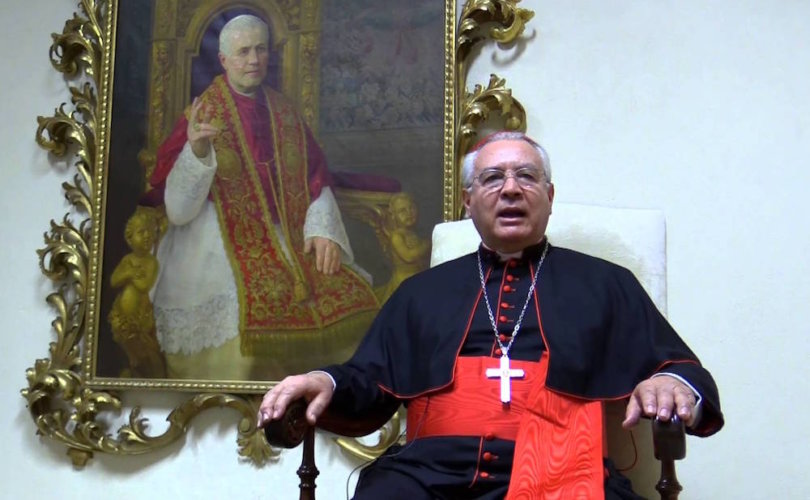 But the bishops are silent on the Church’s teaching against homosexuality, and some even suggest same-sex civil unions as an alternative.

May 25, 2016 (LifeSiteNews) – Mexico’s Catholic bishops are denouncing President Enrique Peña Nieto’s new initiative to reform the constitution and create homosexual “marriage,” but are remaining silent about the immorality of homosexual unions and are even speaking positively about them, despite Catholic teaching to the contrary.

The Mexican Episcopal Conference (CEM), represented by its president, Cardinal Francisco Robles Ortega, declared that “It must be affirmed that there is no basis for comparing or making analogies, no matter how remote, between homosexual unions and the plan of God regarding marriage and the family,” quoting Pope Francis’s apostolic exhortation Amoris Laetitia.

“Only the exclusive and indissoluble union between a man and a woman fulfill a complete social function, because it is a stable commitment and makes fecundity possible. … No union that is precarious or is closed off to the transmission of life assures to us the future of society,” added the CEM.

Hugo Valdemar, the spokesman for the Archdiocese of Mexico City, was more direct, decrying the initiative as one that “attacks Mexican families, as it undermines fundamental values that have formed the Mexican nation, one of those is the family,” in an interview with TV Milenio.

However, the CEM expended much text in the effort to express respect for homosexuals, and confined itself to denying that their relationships could be equated to marriage.

“We recognize the great variety of family situations that can afford a certain stability, but de facto unions or those between people of the same sex, for example, cannot be equated to marriage,” stated the CEM.

The Cardinal Archbishop of Morelia, Michoacán, Alberto Suárez Inda, rejected homosexual “marriage” and blamed its promotion on international organizations but said it could be “legitimate to recognize [homosexual unions] as social pacts, as unions; we respect differences, but we ask that they respect marriage as the foundation of the society and as the center of education for children who have the right to a mother and father,” according to the Michoacán newspaper Provincia.

The archbishop of San Cristóbal de las Casas, Chiapas, Felipe Arizmendi Esquivel, expressed “much respect for those who have a different sexual orientation, whether by choice and personal taste, or because of their family during childhood, or because of fashion.” However, he added that “we cannot cease to declare our faith, nor cease to denounce what is harmful to people and to society.”

The Catholic Church teaches that homosexual acts are “intrinsically disordered” and “contrary to the natural law.” Moreover, the Holy See’s 2003 declaration on homosexual unions teaches that “all Catholics are obliged to oppose the legal recognition of homosexual unions” and that governments “need to contain the phenomenon” of homosexuality “within certain limits so as to safeguard public morality” and to “to avoid exposing young people to erroneous ideas about sexuality and marriage that would deprive them of their necessary defences and contribute to the spread of the phenomenon.”

The president’s proposed amendment must be approved by a two-thirds majority in both houses of Congress and then by half of Mexico’s 31 states and the Federal District. Although the president may be able to muster enough votes in the Congress, the country’s states have shown themselves to be resistant to the notion of homosexual “marriage.”

However, the fact that a sitting president has decided to associate his administration with such an amendment is an indication of the growing influence of the international homosexual lobby in Mexico, despite the country’s strong Catholic roots.

Andrew Chesnut, chairman of Catholic studies at Virginia Commonwealth University, told the AP that Peña Nieto’s new initiative is “of monumental significance” because it is “symbolic of the rapidly waning, eroding influence of the Catholic Church on both politics and the social front.”