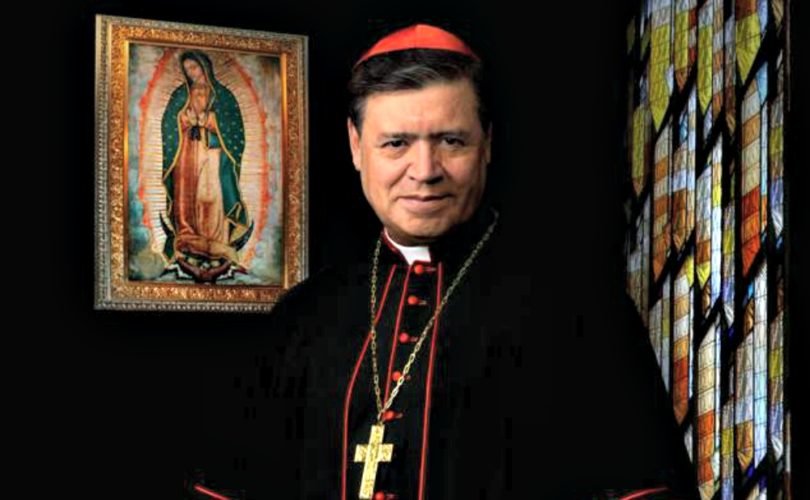 MEXICO CITY, August 18, 2015 (LifeSiteNews) – The transsexual known as Diana Sanchez, whose biological sex is male and is a political figure in Mexico City’s leftist party PRD, wrote a letter to Mexico’s Primate, Cardinal Norberto Rivera, on July 29 demanding he and other cardinals “obey” the Pope in “abstaining from discriminating and judging homosexuals.”

Referring to the recent marches that have taken place across the country in favor of the right to life and the protection of natural marriage, the activist demanded the Primate investigate and “punish” the Mexican prelates who had promoted them, saying they “promote discrimination against citizens based on their sexual orientation” and “allowed and encouraged homophobic attacks.”

The activist argued that the decriminalization of abortion, which has been legal in Mexico City since 2007, and the recent legalization of “marriage” between persons of the same sex have been a “good for the population.”

The Primate’s answer came on August 11 through the information site of Mexico City’s archdiocese. In it, Cardinal Rivera explained how “murdering a child inside its mother’s womb can never be a good for the woman who experiments this drama, let alone for the child who is deprived of the first of all of rights which is that of life.”

“Many women who have aborted often seek reconciliation with Our Lord and with themselves,” he continued. “You cannot imagine the pain and guilt they suffer when they realize that aborting was a horrendous act in which they murdered their own child.”

Rivera went on to call abortion and homosexual “marriage” “false rights,” adding: “It is not Pope Francis who asks us to abstain from discriminating against homosexual persons, but the Catechism of the Catholic Church.”

He explained Church teaching says homosexuals “must be accepted with respect, compassion, and sensitivity,” and clarified the Church also teaches “homosexual acts are intrinsically disordered” as “'they are contrary to the natural law. They close the sexual act to the gift of life. They do not proceed from a genuine affective and sexual complementarity. Under no circumstances can they be approved’ and Pope Francis has not changed this Church doctrine.”

The cardinal ended his letter saying he will pray that Sanchez may find “the truth Jesus has revealed to us and you may live according to that truth.”