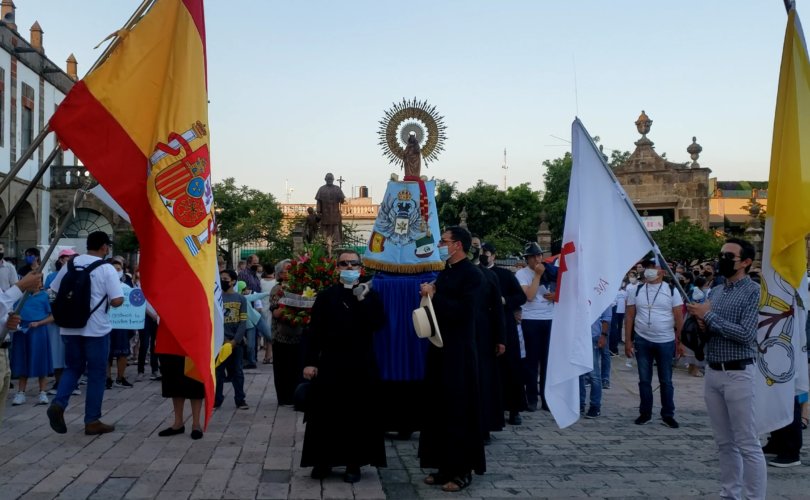 UPDATE, Oct. 18, 2021: LifeSite has received a press release from the parishioners of the canceled FSSP parish, stating, “Despite these [recent restrictive] measures, during the meeting, the Archbishop of Guadalajara, also assured them that there would be nothing to worry about and that for now, they could continue working as before. He also promised that he will reconsider the edict, especially on the issue of the quasi-parish, which gives certainty and hope to the faithful for a positive response from the Archdiocese.” The FSSP in Mexico also released a promotional video in Spanish in defense of their apostolate.

(LifeSiteNews) — After the Archdiocese of Guadalajara in Mexico had closed down a quasi-parish of the traditional Catholic Fraternity of St. Peter (FSSP) with some 150 families, the local archbishop, Cardinal José Francisco Robles Ortega, is willing to meet with the faithful.

LifeSite had reported about the cardinal’s September 21 decree, which shut down the quasi-parish of St. Peter in Chains in Guadalajara. An FSSP spokesman told LifeSite at the time that the community had “not been consulted at any point throughout the process.”

The faithful laity, however, are not willing to just accept this unjust decision, which, according to some sources, has been demanded directly by Rome. As sources tell LifeSite, some 600 Catholics signed a September 26 petition to the cardinal, asking him to rescind his decision to close down the parish.

As LifeSite had reported, the faithful wrote a September 27 press release asking Cardinal Robles for a meeting and to revoke the original decision.

The local FSSP community also prayed a novena “for Love of the Church and the traditional Latin Mass,” at the end of which hundreds of the faithful went on an five-mile pilgrimage to the Basilica of Our Lady of Zapopan, which is located in Guadalajara.

As the parishioners of the closed quasi-parish wrote in their September 27 press release, they now fear the extinction of the traditional rite of the Roman Mass: “For ex-parishioners, who received the news with great surprise, this measure has the forebodes an eventual extinction of the celebration of the Mass according to the Missal of St. John XXIII in the Archdiocese of Guadalajara especially because, despite an announcement in a press conference last July by Cardinal Robles Ortega indicating he would first dialogue with the FSSP, there were no conversations on the subject prior to the declaration.”

A new press release dated October 8 indicates that the cardinal is willing to meet with the faithful, who said they trust “the Cardinal will revert his decree.” The date for this meeting, which was already once postponed, is now set for October 13, the anniversary of Our Lady’s last apparition in Fatima, Portugal, in 1917.

The parishioners “trust that after this meeting in which will be set forth the many spiritual fruits obtained through the Traditional Mass and the many apostolates of the quasi-Parish, the Cardinal will revert the decree which the faithful consider unjust, for they have not been given any grave reason for such suppression, as it is prescribed by the Code of Canon Law for these cases.”

The Archbishop of Guadalajara, Francisco Robles, will meet with the faithful who were part of the quasi-Parish of St Peter in Chains, which was suppressed this September 21st by a decree published only on social networks.

The decree aims to implement the instructions given by His Holiness Pope Francis in the Motu Proprio Traditionis Custodes (Guardians of Tradition) promulgated last July, in which the Holy Father confers exclusive competence to the diocesan Bishops to authorize the use of the 1962 Roman Missal elaborated by the Pope St John XXIII and in use by the Priestly Fraternity of Saint Peter at the supposedly now dissolved quasi-Parish.

After the mandate, which was never officially notified to the faithful not to the FSSP, the more than 150 families that were left Parish-less started a series of actions requesting an audience with the Cardinal, including a letter signed by over 600 people requesting the reversal of the decree, up to messages and drawings made and sent by the youngest of the faithful.

As part of this plea and asking for the protection of Our Lady of Zapopan, tomorrow, the faithful will go on a Pilgrimage from Casa Cristo Rey (Colonia Moderna in Guadalajara) to the Basilica of Zapopan.

If not postponed again, a meeting will be held this upcoming October 13th, with the presence of some of the affected parishioners and the priests of the FSSP, the same that had charge of the quasi-Parish of Saint Peter in Chains which was erected by the Archbishop Emeritus Dom Juan Sandoval Íñiguez in 2011.

The affected parishioners trust that after this meeting in which will be set forth the many spiritual fruits obtained through the Traditional Mass and the many apostolates of the quasi-Parish, the Cardinal will revert the decree which the faithful consider unjust, for they have not been given any grave reason for such suppression, as it is prescribed by the Code of Canon Law for these cases.

With this decree the quasi-Parish of Saint Peter in Chains has been supposedly dissolved, a measure with multiple and serious consequences, for the Latin Community in the Archdiocese of Guadalajara given that the community as such effectively ceases to exist as a juridical entity, and the priests lose jurisdiction to perform sacraments such as baptism and marriages in the 1962 rite without previous authorization.

Insofar the Eucharistic celebration with the traditional rite, they are limited to those which already exist and only in the appointed Churches: Our Lady of the Pilar, St Francis Xavier, and Casa Cristo Rey. This measure seriously hampers the ability to live a full sacramental life as would be expected in any parish community.