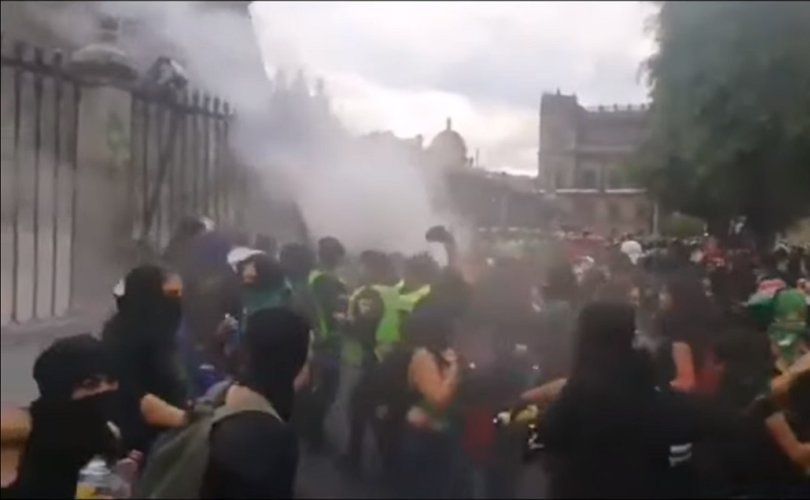 October 4, 2019 (LifeSiteNews) — Groups of pro-abortion feminists in Mexico City, Guadalajara, and several other Mexican cities rampaged through the streets on Sunday in a pro-abortion “march” last Saturday that included attempts to set churches and government buildings on fire, spray-painting of graffiti, vandalism, and attacks on bystanders, including reporters.

However, in Guadalajara and Mexico City, Catholics responded to the call to line up in front of their churches to protect them from the vandalism that churches have suffered in previous marches by feminists. The Catholics held banners of Our Lady of Guadalupe and chanted “Viva Cristo Rey,” in imitation of the Cristeros, who defended the Catholic faith from government oppression in the 1920s.

In Guadalajara, hundreds of Catholics lined up around the city’s cathedral to protect it from the marchers, and no damage was inflicted on the building, despite the fact that the marchers’ rout took them directly next to the building.

In Mexico City, the women tried to set fire to both the gates of the city’s cathedral and the national Chamber of Commerce building. They spray-painted graffiti on sculptures on the Paseo de la Reforma (the city’s main avenue), as well as on the national Government Palace, on walls of businesses, parts of the subway, and on sidewalks.  They chanted, “Abortion yes, abortion no, that is something I decide!” and held signs demanding “legal, safe, and free abortion.”

The women and girls, some of whom seemed to be teenagers from local high schools, wore green headscarves and shirts, many of them hiding their identities by covering their faces. Some wore witches costumes or dressed as nuns in acts of mockery of the Catholic faith. Others held red flags with the communist symbols of hammer and sickle.

In Guadalajara, where this reporter witnessed much of the march, many sprayed buildings with pro-abortion graffiti, including at least one church in the hours before the march.  Some simulated perverse sex acts in front of an elderly man who called out “Viva Cristo Rey.” Others attacked a reporter for the eminent newspaper El Universal and damaged his camera. The reporter, who wished to remain anonymous and said he was merely doing his job in covering the march; organizers had previously warned that male reporters were not welcome and might be attacked.

The women and girls call themselves “Marea Verde” (“Green Tide”) in imitation of a feminist pro-abortion movement in Argentina that goes by the same name, and which called for pro-abortion demonstrations in multiple countries to achieve the legalization of the killing of the unborn.

As LifeSite has reported on many occasions, similar feminist marches in Argentina have repeatedly resulted in attacks on Catholic churches and on the Catholics who have lined up to defend them. In March of this year such rampages occurred in Argentina, Spain, and Uruguay, where berzerk feminists also sought to set Catholic churches on fire and chanted anti-Christian slogans. Other similarly violent and vandalistic marches have been taking place in Mexico City in recent weeks.

Jaime Cedillo, president of the Jalisco division of the National Front for the Family, noted the sharp difference between the violent and aggressive feminist march and his own organization’s peaceful march the week before, in which an estimated 250,000 people demonstrated in favor of life and family.  He believes that the feminist Marea Verde organizers, who were from other countries, managed to obtain access to local public and private schools to ideologically indoctrinate the students and to incite them to join a movement they don’t fully understand.

“In reality, these are international movements, definitely, and here we could see the infiltration of foreigners, that’s a fact,” Cedillo told LifeSite. “They riled up students from high schools. We could see many young women, many young girls, who don’t yet have the ability to be taking this type of attitude, and we can see how excited they are, shouting, very loud, that really doesn’t correspond to a demonstration of this kind. They’re ideologically indoctrinated, and convinced of a cause that they don’t even understand.

“But in any case it is an international expression, which is seeking to position gender ideology, and particularly, to introduce abortion in all countries. We shouldn’t lose sight of the fact that abortion is a big industry, a big business, and there are international forces that seek to impose this in our country as well,” Cedillo added.

Abortion is illegal under most circumstances in Mexico’s 31 states, but in its Federal District (Mexico City) it has been legal on demand for the first trimester (and in other more limited cases in later trimesters) since 2006. Since then, over 200,000 unborn children have perished at the hands of the city’s abortionists, the vast majority from Mexico City or the state of Mexico that borders it.

The legislature of the state of Oaxaca recently legalized abortion on demand during the first trimester, but the law violates the constitution of the state, which protects life from conception. It is not yet clear if the governor will sign the law or if the state’s highest court will permit it to stand.