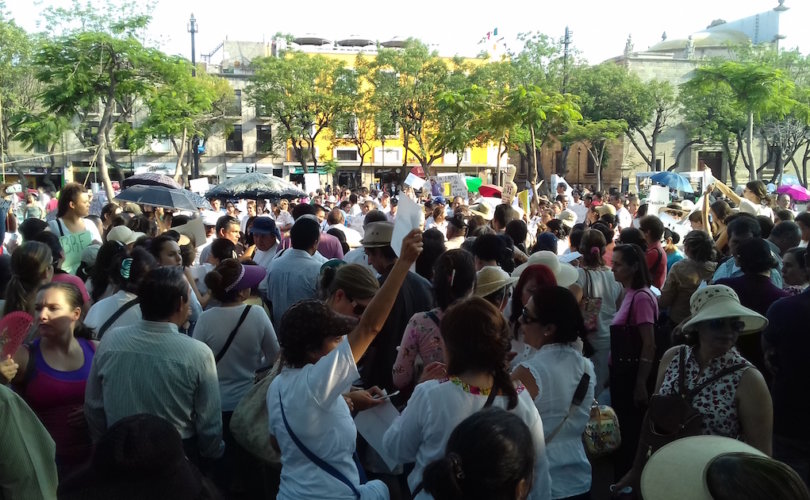 June 6, 2016 (LifeSiteNews) – Members of Mexican President Enrique Peña Nieto’s own party began to distance themselves last week from the president’s recently-announced initiative to amend the constitution to create homosexual “marriage,” following protests throughout Mexico and in numerous foreign countries on Wednesday by pro-family groups.

Thousands of Mexicans in 26 states as well as the United States, Italy, Spain and even Russia, protested against Peña Nieto’s push to impose the gay agenda on the entire country through propaganda campaigns, homosexualist sex-ed programs in schools, and “marriage” for people of the same sex.

Crowds of demonstrators, led by the National Front for the Family, gathered around state congressional buildings, party offices, and embassies to chant “The family, united, can never be defeated!” and to demand a hearing from legislators and party officials. They expressed anger at what they regard as a capitulation of the president to a foreign agenda promoted by the international homosexual lobby.

Federal deputy Alejandro Armenta Mier, a member of the president’s Institutional Revolutionary Party (PRI) who represents the state of Puebla in the national Chamber of Deputies, told demonstrators that he would “accept the consequences” of voting against the president.

Lilia Merodio Reza, a PRI senator from the state of Chihuahua, said that she and various other PRI senators had “told the [party] coordinator that we aren’t going to go along with this proposal that the Executive has presented.”

The PRI members who oppose the initiative will have little to worry about, however. On the eve of the protests, the party’s president, Manlio Fabio Beltrones, announced that the PRI “will respect the freedom of federal and local deputies and senators to express themselves” on the matter.

In Guadalajara, four different protests were held in different parts of the city on Wednesday, including one in front of the state legislature, which would ultimately have to vote on the constitutional amendment if it passed the national legislature.

Jaime Cerrillo, president of the National Parents’ Union and local coordinator of the National Front for the Family, told LifeSiteNews that the president’s initiative is an “attack against the family.”

“Right now the family is in a state of total decomposition in Mexico, and instead of protecting and promoting families as the social good that they are and as the natural and fundamental element of society, they’re attacking it,” said Cerrillo.

After an hour and a half of protests outside of the legislature of the state of Jalisco, which were attended by about four hundred people, Cerrillo and four others were allowed to enter the building to talk to legislators. Upon his return, Cerrillo announced that they had agreed to establish a roundtable dialog with pro-family organizations.  A similar receptivity was found by politicians throughout the country.

The president’s initiative comes in apparent response to a pro-family constitutional reform proposal that would protect the natural family one man and one woman, which was introduced in the national legislature several months ago following a petition signed by hundreds of thousands of citizens.