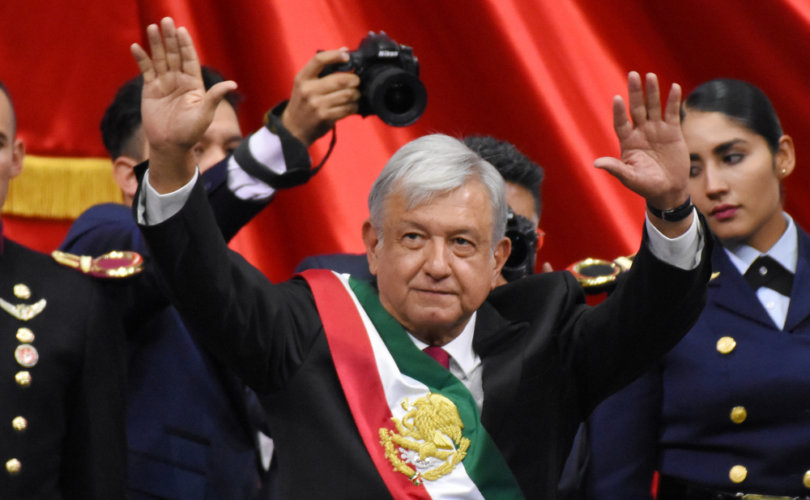 November 20, 2020 (LifeSiteNews) — The populist left-leaning President of Mexico doubled down in a press conference on November 9, arguing that Mexico “cannot act recklessly” in congratulating Joe Biden as the “potential” winner of the 2020 U.S. presidential elections until official results are posted.

“I want to make it clear, to inform the people of Mexico, regarding the United States elections, the position of the government that I represent is to wait for the United States authorities in charge of the electoral process to decide on the winner for the presidency,” said Andrés Manuel López Obrador at the press conference.

“We cannot act recklessly, it is not only a matter of form, it is also of substance. I have the power, and at the same time the obligation, to adjust to the constitutional mandate, in terms of foreign policy, and Article 89 of the Constitution, section 10, is very clear … it establishes that foreign policy must be guided by the principles of non-intervention and self-determination … [We] cannot meddle in the politics of other countries … We have to be respectful.”

Obrador had already said on November 7 — the day most media outlets called the presidential race for Biden — that he would not be congratulating either Biden or President Donald Trump as “winners” and would wait instead until official results were declared by the U.S. government.

“With regard to the U.S. election, we are going to wait until all the legal matters have been resolved,” he added.

A recent poll conducted by Mexican newspaper El Financiero suggests that the majority of Mexicans, 57 percent, support Obrador in not congratulating Biden.

In 2006, Obrador lost his first presidential election to Felipe Calderón, in a race he said was unjust, fraudulent, and stolen from him.

Obrador’s recount request was rejected by Mexico’s federal election authorities, despite Calderón winning by a slim majority of only 0.6 percent.

In his press conference earlier this month, Obrador explained that he is not for or against either Biden or President Donald Trump, and that he has good relations with both men.

“Mexico is a free and sovereign independent country, so we are not in favor of any party in the United States, we have a very good relationship with the entire government of President Donald Trump because there has been a relationship of respect of non-intervention,” said Obrador.

“And we have no difference with the candidate of the Democratic Party, Mr. Biden, I came with no problem with him, I even met him 8 or 10 years ago. We do not have anything against the president, possible president-elect, now candidate Biden,” said Obrador.

Obrador is one of a handful of world leaders who have yet to offer congratulations to Biden. Although he was declared the winner by the mainstream media, many states have not yet officially certified the results.

Notably, President Vladimir Putin of Russia and President Jair Bolsonaro of Brazil have yet to offer any sort of congratulations to Biden.

Trump himself has not conceded. He instead launched a legal challenge to the results which he said cannot be trusted and are fraught with “fraud.”

Trump’s legal team says they identified more than twice the number of provable invalid ballots necessary to establish that Trump was the true election winner.

On November 7, Trump said, “We all know why Joe Biden is rushing to falsely pose as the winner, and why his media allies are trying so hard to help him: they don’t want the truth to be exposed.”

“The simple fact is this election is far from over. Joe Biden has not been certified as the winner of any states.”

Many world leaders were quick to congratulate Biden’s “win,” notably Canada’s Prime Minister Justin Trudeau, who on November 7 sent out a statement addressing Biden as president-elect in his message.

The United States Conference of Catholic Bishops also sent a message, congratulating him as the second “Catholic” president.

The bishops’ message was characterized by Archbishop Viganò as “disturbing.”

1
Here’s how to stop Google from collecting huge amounts of your data
2
FBI charges pro-life priest with violating abortion access law one week after Mark Houck raid
3
Prophecy: War will break out in Europe after Pope visits Moscow
4
Catholic Identity Conference opens with call to ‘resist’ Pope Francis and the ‘New World Order’
5
Tucker Carlson: Biden admin ‘may have blown up’ gas pipelines in Baltic Sea
Subscribe to Daily Headlines »