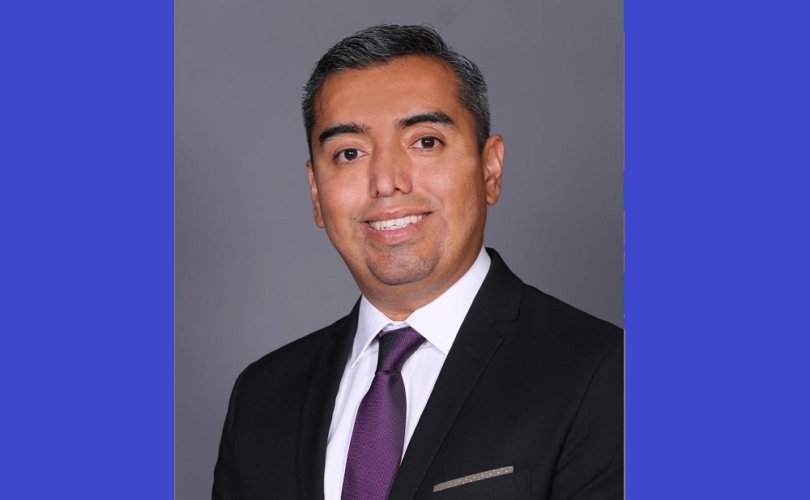 Juan Carlos Leal Segovia.Congress of the State of Nuevo León.

NUEVO LEON, Mexico, March 22, 2019 (LifeSiteNews) — Juan Carlos Leal Segovia was until recently a local deputy of the ruling MORENA party in Nuevo León, Mexico. He was deregistered from the party earlier this week for having spoken out against abortion in the Nuevo León Congress and — “worse” — in favor of marriage in its original sense as a union between a man and a woman. He was also asked to separate from the party group in the N.L. Congress.

Leal Segovia was sanctioned in particular for several tweets on his account, @CarlosLealMx. On March 14, he posted a picture of his office door with a blue “Save Both Lives” kerchief used as a symbol by the South American pro-life movement.

He joined members of the opposition party PAN at the beginning of the month in approving an amendment to the first article of the local constitution that makes abortion an offense in order to “guarantee the right to life” from conception up to natural death. The measure was adopted in Nuevo León by 30 votes to eight (and four abstentions).

The National Regeneration Movement (MORENO), whose leader, Andrés Manuel López Obrador, took over as president of Mexico last year, is a left-wing party that supports all types of “diversity,” including sexual diversity, and care for the environment. The party line is pro-LGBT and pro-abortion. But it also proclaims freedom of opinion and of religion.

Leal made his so-called “homophobic” remarks in December. One of those, his accusers said, followed a Facebook post by boxer Dario Larralde, who had made insulting remarks about homosexuals, including “f‑‑‑ gays — Hitler was right about that.” Leal says his own post, “To follow Hitler is to give hormones to children to change their natural sex,” was authentic but had nothing to do with the first message.

For this and other remarks, complaints were lodged against the politician by LGBT activists who took his case to the “National Honesty and Justice Commission” (CNHJ) of MORENA, who called Leal to a hearing at its headquarters in Mexico City on February 15.

The idea was for him to present public apologies and to participate in a workshop about human rights. Leal was present at the hearing but refused to comply.

The hearing was “very rough,” according to an official statement of the CNHJ: “His lawyers adopted arrogant, haughty and gross attitudes.” One of them was expelled. Leal was accused of “refusing to participate.”

He has been officially branded a homophobe.

Last Tuesday, he tweeted: “I am a man of integrity. I proclaim the necessity to protect the family, values, life and childhood in order to have a better society. I can hear the persecution, but I won’t chicken out.”

In a recent television show, Carlos Leal said he was challenging the CNHJ’s decision.