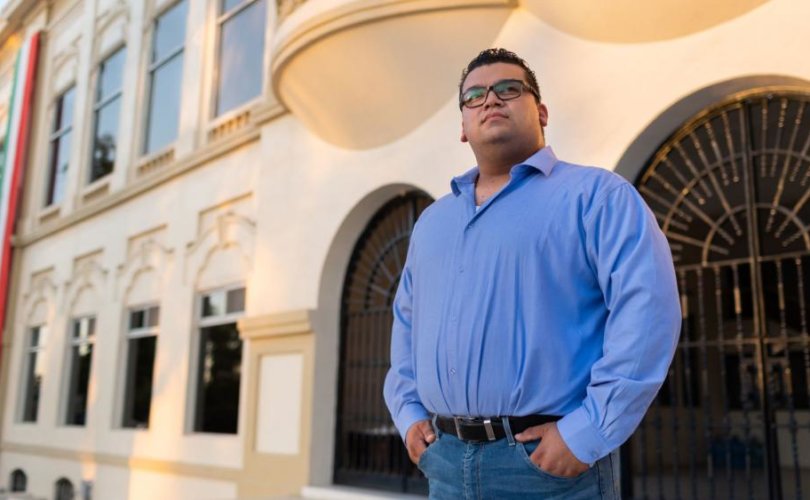 (LifeSiteNews) — A recent graduate of a university in Mexico is facing the potential loss of his psychology degree and license to practice after defending the truth about family and gender in his valedictorian speech.

Christian Cortez Pérez graduated from the Autonomous University of Baja California (UABC) School of Medicine and Psychology in June. Following a speech in which he opposed radical gender ideology and the “redefinition of the family,” the university formally acted to ban him from practicing psychology post-graduation. Pérez is awaiting the final decision.

“I exercised my fundamental right to free speech to address my classmates about what I believe are the most pressing issues of our time,” Pérez said, according to Alliance Defending Freedom International. “Now, I stand to lose my entire professional career because I expressed views with which some students and faculty disagree. Public universities must respect the free speech rights of all students, and I am committed to obtaining justice not just for myself, but for all Mexicans interested in preserving the right to freely express themselves.”

The commencement speech, given by Pérez in Spanish on June 27, encouraged his peers to reject woke ideologies on family and gender.

“Today we are deep into a real anthropological struggle to redefine the human being, the human person, man, through the implementation of ideologies and fashions of thought that always end up undermining dignity and freedom.”

— Article continues below Petition —
Free Enoch Burke, the teacher jailed after not using teen's "they" pronoun
Show Petition Text
16589 have signed the petition.
Let's get to 17500!
Thank you for signing this petition!
Add your signature:
Show Petition Text

During the speech, students and faculty protested aloud and some even left the room. Following the graduation ceremony, Pérez “has been the subject of a silencing and sanctioning campaign initiated by the school’s professors,” according to ADF International.

The faith-based legal group, which is supporting Pérez in his battle, explained that professors joined forces and issued “a ‘manifesto’ calling on the university to sanction Christian’s so-called ‘hate speech’.’”

According to the ADF International case summary, the professors’ demands include “withholding his academic degree and professional license, withdrawing his merit award, and alerting psychology associations across Mexico regarding his actions.” Pérez “was informed on August 4 that the university has initiated proceedings against him and has submitted a counterclaim to protect his rightful interests.”

“Students and professors all over the world find themselves subject to censorship campaigns, often accompanied by legal proceedings, which threaten severe harm to both their reputations and careers,” the ADF stated.

A professor from the University of Louisville was fired for a speech about gender dysphoria, leading to a 2019 lawsuit filed by ADF on Dr. Alan Josephson’s behalf. The legal battle is ongoing.

In June 2022, a five-year litigation between a student and the Georgia university he attended was settled, siding with the student whose proclamation of the Gospel was illegally censored by the school.

“Public universities must respect the free speech rights of all students, and I am committed to obtaining justice not just for myself, but for all Mexicans interested in preserving the right to freely express themselves,” Pérez said. “To be clear, I recognize that some may not agree with the content of my speech, but that’s what free speech is all about. Everyone should be able to peacefully share their views at university, without fear of punishment or retaliation.”

The university’s decision is expected to be released on September 18.