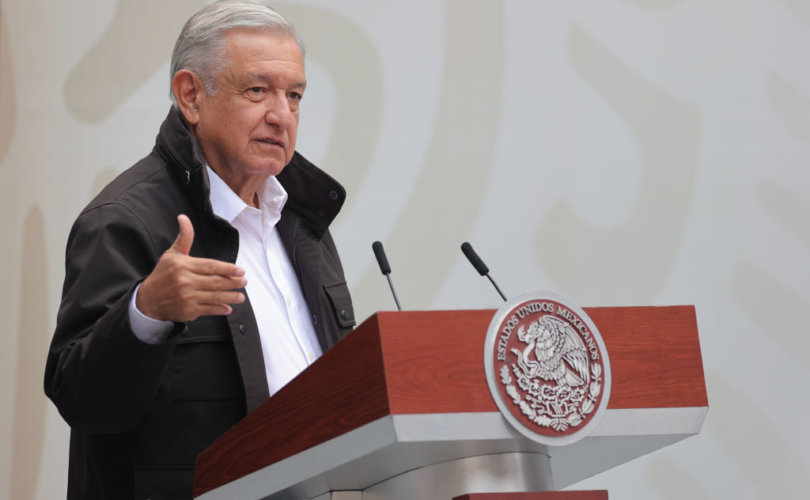 December 17, 2020 (LifeSiteNews) – The populist and left-leaning President of Mexico said that leaders who impose lockdown measures on their population to combat COVID-19 are like dictators who let their “authoritarian instincts show.”

Mexican President Andrés Manuel López Obrador made the comments on December 2 after being asked why he is rarely seen wearing a face mask.

According to an AP report about his comments, Obrador said that measures enacted by governments that limit their freedom of movement are “fashionable among authorities … who want to show they are heavy handed, dictatorship.”

“A lot of them are letting their authoritarian instincts show……the fundamental thing is to guarantee liberty.”

It is unclear whether the comments by the Mexican President were directed at local state governments in Mexico, or at governments worldwide.

However, Obrador’s December remarks were not the first time he has spoken out against government-imposed lockdowns in the name of combating COVID-19.

In October, he blasted the leaders of many European countries for locking down a second time, saying no to “coercive measures” and that lockdowns show “an authoritarian urge by the authorities, by the government, with all due respect, on the part of those who opt for this.”

“Not even in its worst moments did Europe have these curfews and all these measures,” added Obrador.

Obrador has resisted calls in his home nation to enact nationwide lockdown measures and since the beginning of the pandemic he has seldom been seen wearing a mask.

He reiterated on December 2 that the wearing of a face mask should be voluntary.

“Everyone is free. Whoever wants to wear a face mask and feel safer is welcome to do so,” said Obrador.

Some states in Mexico have implemented mandatory mask-wearing and have ordered some businesses to close, even those with conservative-leaning governments such as Nuevo León and Tamaulipas.

Obrador recently suggested to his citizens that they should consider avoiding exchanging gifts at Christmas, but said that he would not impose a nationwide lockdown due to the COVID-19 crisis.

Mexico, with a population of around 126 million people, has seen around 1.15 million COVID-19 cases with nearly 110,000 deaths attributed to the virus. Testing for COVID-19 is not as widespread or encouraged as in the United States or Canada.

Despite Obrador appearing to be a champion of freedom for his people, Mexico just recently passed a New General Population Law, with the hopes of creating a new “Unique Digital Identity Card” for its citizens.

In November, Obrador said that Mexico “cannot act recklessly” in congratulating Joe Biden as the “potential” winner of the 2020 U.S. presidential elections until official results are posted.

Despite this, a few days ago Obrador sent a letter to Biden to congratulate him on his “triumph.”