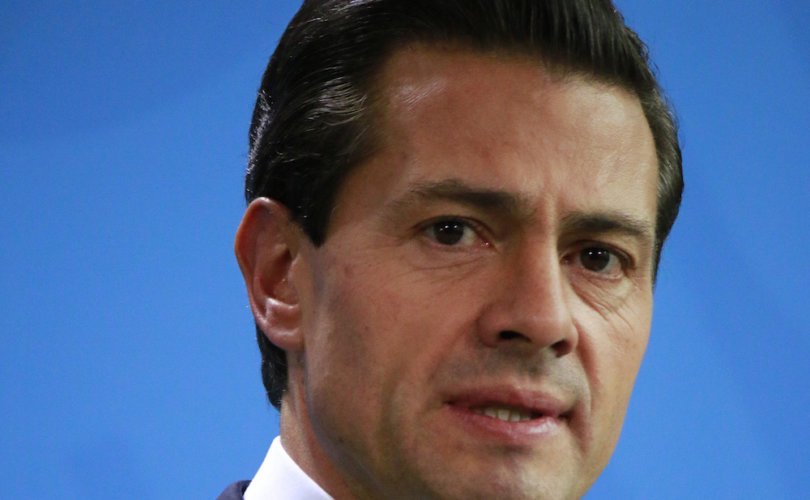 May 19, 2016 (LifeSiteNews) – Mexico’s besieged president Enrique Peña Nieto provoked jeers from many members of a skeptical electorate when he announced a new initiative Tuesday to amend the constitution to impose homosexual and transsexual “marriage” on the entire country.

The amendment would guarantee that people “can enter into a marriage without discrimination for … gender or sexual preference,” according to the president’s announcement.

The president’s initiative appears to be an attempt to counteract a massive popular campaign to amend the constitution to protect the traditional family and prohibit homosexual “marriage,” which is currently being imposed on the states by the Supreme Court. More than 240,000 Mexicans signed petitions in favor of the amendment, and the National Congress is now considering it.

While homosexual activists and their sympathizers praised the president’s pro-homosexual and transgender initiative, a large number responded with expressions of contempt on his Facebook page and Twitter account.

Under the announcement on Facebook, which contained a photo of a government building bathed in the colors of the LGBT rainbow, one Diego Vega remarked, “Although there are better causes to fight for and for which to seek change, you are now legalizing this crap that only serves to control those sectors of the population that will benefit instead of getting rid of things that really are damaging the country.”

Marisol Glez Carrion wrote that “there are those who will call you to account for decisions which transcend generations and which were your responsibility to guide in an ethical and responsible way! I see that you don’t take into account what God thinks and you’re only thinking about what man thinks … please consider well the implications of this … you will be held accountable by God.”

The comments occupied the number two and three spots below the announcement in number of “likes.”

The president, who is widely seen as an inept, do-nothing administrator and a corrupt defender of special interests, has seen his approval ratings plummet to 32 percent since his election in 2012. Although he regards himself as a Catholic, his administration is advancing a pro-abortion and pro-LGBT agenda in apparent response to heavy international pressure.

Recent polls have continued to show that a large number of Mexicans oppose homosexual “marriage,” with percentages against it ranging from 44 percent to 62 percent over the last three years, and percentages from 36 percent to 52 percent in favor. A majority of Mexicans continue to oppose the legalized killing of the unborn in most cases as well.

Juan Dabdoub Giacoman, president of the National Council for the Family (ConFamilia), which is leading the campaign to amend the constitution in favor of the traditional family, said that his group welcomes a debate with the president.

ConFamilia “welcomes the President of the Republic and the Institutional Revolutionary Party (PRI) to the debate initiated by our people through the first Initiative of Citizen Constitutional Reform in the history of Mexico, over natural marriage and the natural family, presented to the Senate of the Republic last February 23, accompanied by 240,000 signatures,” said Dabdoub in a press communique.

“The initiative promoted by President Peña Nieto, supported by his party, the PRI, is a proposal that positions him and his party in an anti-family stance that that violates the Universal Declaration of Human Rights,” added Dabdoub.