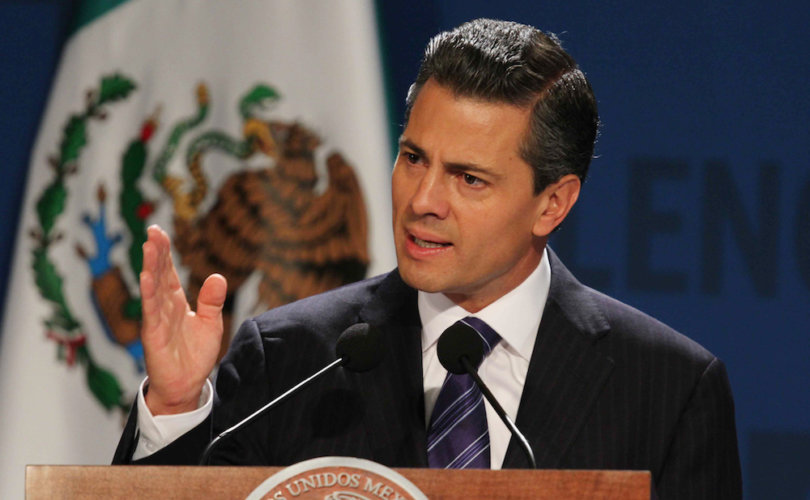 For the first time since the PRI was created in 1929, the party no longer holds a majority of state governorships. Out of 17 states holding elections on June 5, the PRI won only five states and lost four states with 19% of the country’s population. The result is that the PRI now holds the governorship in only 15 of the country’s 31 states, with 45% of Mexico’s population. The party is also out of power in the nation’s Federal District.

The president’s initiative, announced on May 17, includes a massive propaganda campaign to convince public school students and the population in general that homosexuality and transgenderism are normal and morally acceptable, as well as membership in the United Nations’ “LGBT Core Group,” a coalition of nations promoting the homosexual agenda worldwide.

Peña Nieto’s new pro-gay offensive was met with condemnation by the leadership of the Catholic Church in Mexico as well as the creation of the National Front for the Family, a coalition of over a thousand organizations united to defeat the initiative and to protect the traditional definition of marriage. The National Front for the Family held protests throughout the country on June 1 and 2, and PRI elected officials began to abandon the president, stating their opposition to the initiative and promising their constituents they would vote against it.

The cause of the PRI’s defeat cited most often in the Mexican media was the president’s homosexual “marriage” initiative. Although it remains to be proved that the PRI’s massive electoral loss was due to the unpopularity of the proposed constitutional amendment, polls indicate that Mexicans are both dissatisfied with Peña Nieto’s presidency and opposed to homosexual “marriage.”

“Peña Nieto and the PRI have paid the price at the ballot box for presenting initiatives against Mexican values,” said Luis Losada Pescador, who leads the activist organization CitizenGO as part of the coalition of the National Front for the Family. “It may be that Peña Nieto is trying to win foreign friends, but he has reaped internal rejection,” he added.

The Bishop of Veracruz, Felipe Gallardo Martín del Campo, noted of the electoral results that “normal Mexicans, who are 99 percent [of the population], don’t accept marriage between people of the same sex and the proof of this are the protests that have been held throughout the country.” He added that other parties “should work harder and not commit the same errors because they know that in the next election the people are not going to vote for their party.”