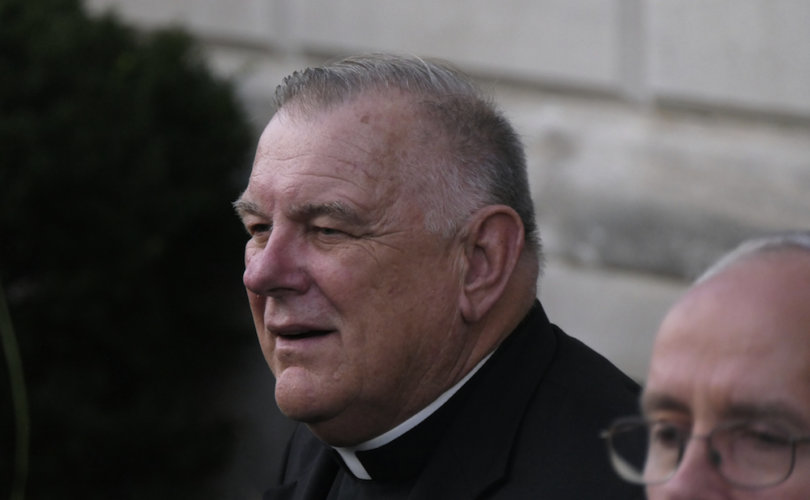 September 25, 2018 (LifeSiteNews) — Catholics believe in God but not in the Church’s leadership, Miami Archbishop Thomas Wenski acknowledged to his priests last week.

The clerical sex abuse crisis in the Catholic Church is a “crisis of leadership,” Wenski said in a September 18 homily, versus “a crisis of faith” or “mainly about a crisis of sexual abuse by clergy.”

“Our people still do believe in God, but they don't believe in us,” the archbishop said. “Of course they're supposed to believe in the Lord, not us. But if we are going to lead them – as bishops, as pastors and parish priests – they need to be able to trust us.”

Wenski was preaching to the priests of his archdiocese during vespers at the opening of their September 18-20 convocation, according to report from the U.S. Bishops’ Catholic News Service (CNS) that was picked up by The Boston Pilot.

He spoke about the shocking developments since June – the Pennsylvania grand jury report detailing seven decades of sexual abuse in six dioceses there, “the fallout over the disgrace” of Archbishop Theodore McCarrick, the former cardinal-archbishop of Washington, and former U.S. Nuncio Archbishop Carlo Maria Viganò’s “testimony” implicating Pope Francis “in having ignored evidence of McCarrick's abuse.”

These things have reopened the wounds from 2002 when the abuse crisis first broke, Archbishop Wenski said.

But he curiously referenced the renewed wounds of clergy sexual abuse as though the U.S. bishops had more fully addressed the scandal at the time the scandal broke – to include abuse victims over the age of majority.

Wenski said in his homily that the new developments “have reopened wounds that many thought were cauterized in 2002 when bishops adopted 'zero tolerance' policy (about) those who abused minors and vulnerable adults.”

The term “vulnerable adult” typically refers to an individual that due to functional, physical, or mental is unable to be responsible for their care.

But with clerical abuse the concept expands significantly because of the added element of betrayal when ordained clergy abuse those under their spiritual care.

“There is a zero tolerance policy on abusers since 2002,” according to the USCCB Secretariat of Child and Youth Protection Resource Booklet from
September 2010. “When even a single act of sexual abuse by a priest or deacon is admitted or is established after an appropriate process in accord with canon law, the offending priest or deacon will be removed permanently from ecclesiastical ministry, not excluding dismissal from the clerical state, if the case so warrants (CIC, c. 1395 §2; CCEO, c. 1453 §1).”

However, neither the USCCB’s Charter for the Protection of Children and Young People nor the corresponding Essential Norms for Diocesan/ Eparchial Policies Dealing with Allegations of Sexual Abuse of Minors by Priests or Deacons, both initially drafted in 2002 and revised a number of times since, address the abuse of vulnerable adults – whether seminarians preparing for priesthood or other adults somehow under any authoritative purview of clergy.

McCarrick — removed from public ministry in June due to credible and substantiated allegations he abused a minor 47 years ago — helped to draft and publicize the U.S. Bishops’ Charter for the Protection of Children and Young People, also known as the Dallas Charter, which also does not address holding bishops accountable for abuse or its cover-up, outside of “fraternal correction” by fellow bishops.

In Wenski’s homily to archdiocesan priests last week, he pointed out that the number of abuse allegations has dropped since 2002, and while he acknowledged there was anger toward the Church’s hierarchy about clergy sex abuse, he indicated it was limited to past failures to address it.

“The grand jury report did acknowledge that since 2002 an almost negligible number of priests have offended,” he said. “But anger, especially toward Church leadership who in the past failed to address abuse, shows that 2002 came too late for too many victims.”

Anger persists among Catholics who call for accountability from Church leaders, particularly those who knew about McCarrick’s decades of abuse of minors, seminarians and young priests, and either turned a blind eye or actively enabled it.

The reality that clergy sexual abuse encompasses more than just minors was brought more to light by the McCarrick allegations of predation of seminarians and young priests.

The McCarrick scandal has also highlighted the issue of homosexual clergy, the prevalence of homosexual predation by clergy in the sex abuse scandal and a long-suspected network of homosexual priests and bishops, many of whom are active sexually and cover for that and other sexual sins.

Since the McCarrick revelations, additional abuse allegations have been made against U.S. clergy, including more involving the once prominent cardinal and other clerics.

The charges have forced the narrative on the clergy sex abuse scandal to expand to include seeming widespread abuse of seminarians and suggest that abusive and complicit prelates remain in leadership positions.

Earlier this month, Pope Francis called a sexual abuse prevention summit with the world’s bishops in Rome next February, and thus far it looks as though protections for seminarians will not addressed by the meeting.

Conflicting news releases from Francis’ Council of Cardinals and the Vatican Press Office stated that the summit theme would be on “protection of minors,” and “prevention of abuse of minors and vulnerable adults,” respectively.

The Vatican Press Office did not respond to LifeSiteNews’ inquiry into how “vulnerable adults” will be defined for Francis’ abuse meeting with the bishops.

The pope has yet to answer allegations from Viganò’s bombshell testimony released in August that Francis knew McCarrick had been sanctioned by Pope Benedict XVI for abuse and lifted the restrictions on him anyway.

Francis has kept as members of his Council of Cardinals a number of prelates, Chilean Cardinal Francisco Errázuriz and Honduran Cardinal Oscar Rodriguez Maradiaga, who have been accused of cover-ups.

A September 22 report from the German magazine Der Spiegel details charges from abuse victims that Francis was neither merciful nor responsive toward Argentinian sex abuse victims as archbishop of Buenos Aires. A German documentary produced last year also alleges he ignored and covered up abuse in Argentina. Critics argue he has been neglectful in other abuse cases as well.

The U.S. Bishops Conference announced last week that it was moving forward “within its authority” to investigate McCarrick and augment policies to hold bishops accountable in the abuse crisis after their request to Francis for an apostolic visitation to the U.S. Church to address the scandal was apparently rejected.