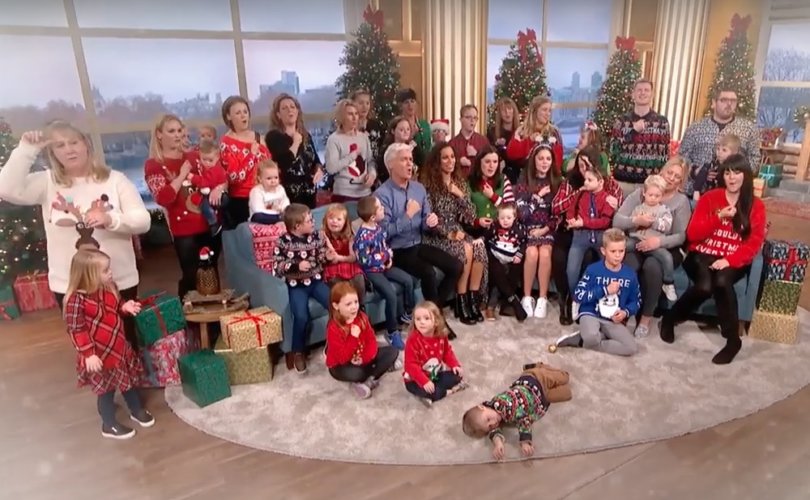 December 18, 2018 (LifeSiteNews) – A viral video of children with Down syndrome singing a Christmas classic is making the rounds and raising appreciation for their intrinsic value, this time with some surprise star power behind it.

Wouldn’t Change a Thing is a group dedicated to a “world where negative perceptions of Down syndrome are a thing of the past” through articles, speaking to the press and various organizations, highlighting positive stories from Down families, and videos that appeal to mass audiences while challenging popular assumptions.

The group’s most recent project collects videos of 25 families of kids with Down syndrome, singing along to Michael Buble’s rendition of “All I Want for Christmas Is You” as well as performing the lyrics with sign language. Last week, the group of kids and parents appeared on the British ITV talk show This Morning, complete with a surprise appearance by Buble himself.

“When I heard that Wouldn’t Change a Thing had chosen one of my songs to sign to, I was really moved by it,” the artist said. “It’s absolutely beautiful.”

The video begins as a montage of the individual families’ videos, then transitions halfway through to the This Morning set, where the children are brought in to watch the lighting of several Christmas trees and eventually sing and sign all together with the hosts.

Co-host Rochelle Humes apologized for tearing up during the segment, The Mirror reported. “It's just so lovely,” she said. The Mirror noted that the segment elicited a powerful response on social media, as well.

The video “has me crying into my porridge. As someone who cares for an adult with DS, this is SO important,” one viewer said. “Excuse me while I wipe my tears off my sleeve,” another asked.

Still more audience members endorsed the “beautiful” segment for having them “absolutely sobbing” and congratulating everyone involved for “magical stuff.”

Buble himself opened up this fall about a challenge in his own family, his five-year-old son’s two-year battle with liver cancer. Noah, the oldest of Buble and wife Luisana Lopilato’s three children, is said to face a long recovery but is doing well.

“When this all started, I became the strength to somehow pull us and lift us and be positive,” the singer said in October. “When the chemo was done and they said, 'We did it,' 'We're good, he's OK,' I just fell. My wife picks me up now.”

“We took it day by day,” he explained. “We all moved and lived by (Children's Hospital Los Angeles) and we just had the best doctors. God, thank you Jesus Christ.”

Down syndrome, or Trisomy 21, is a genetic disorder typically associated with physical growth delays, distinct facial traits, and often intellectual disability. Despite these challenges, a 2011 study published in the American Journal of Medical Genetics found that 99 percent of people with Down syndrome described themselves as “happy,” and only 4 percent of parents with Down children expressed regret about having their child.

Nevertheless, around the world Down syndrome is seen as a justification for aborting preborn children.

In 2015, the pro-life Charlotte Lozier Institute estimated that abortion reduces the Down community in the United States by 30 percent. It has been estimated that 90 percent of babies in Great Britain to receive a Down syndrome diagnosis are aborted, 65 percent in Norway, virtually 100 percent in Iceland, and 95 percent in Spain.