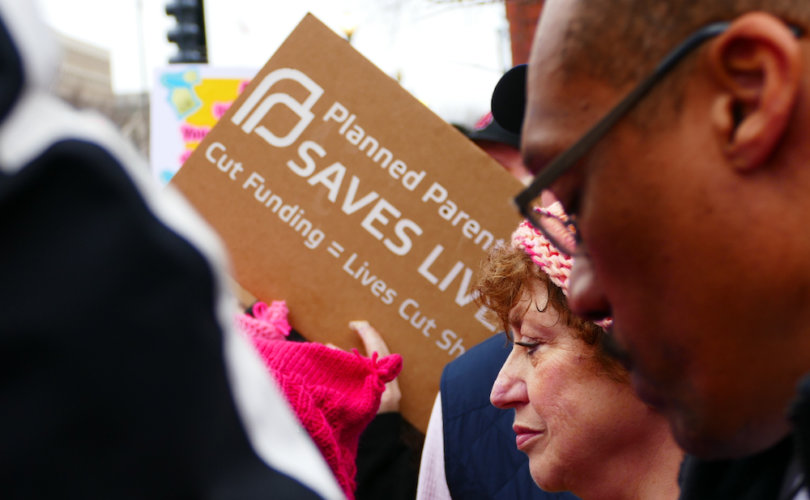 Giving feminists a “to-do list,” Moore also urged them to form “regions of resistance” and coached them on implementing incremental advancement of abortion, just as what occurred with Roe v. Wade, saying it helped “create the new normal” in acceptance of the procedure.

“I was thinking this morning when I was writing this up, I’ve supported Planned Parenthood forever,” Moore stated. “I’ve contributed to them, I’ve done fundraisers for them. But I realized, I’ve never joined.”

“So this morning, I joined Planned Parenthood!” he exclaimed to the crowd. “Whom amongst you will join Planned Parenthood?! ACLU?! NARAL?! The environmental groups. Join every group, let’s make these groups huge.”

Along with calling Congress and participating in leftist and pro-abort groups, Moore told protesters to form personal rapid response teams for organizing and also to take over the Democratic party and to run for office.

“God bless the Democrats who fought with us, who’ve done so many great things,” the liberal filmmaker said. “It’s no knock on them, but if you were coaching the women’s basketball team … twice in 16 years, my friends, we’ve won, and then lost.”

“We’ve let this happen twice now in 16 years,” he continued, referencing splits between the popular and the Electoral College vote. “We win the White House, but they walk through the door.”

Democrats, pro-aborts, and the media were all stunned by Donald Trump’s election victory over Hillary Clinton. The party and the left have struggled to find their way forward in the wake of the loss, yet persisted in their disconnect with the American people.

Still, the left and the media continue to state and report that a majority in the U.S. is opposed to the incoming Trump administration.

“Are you gonna let this happen again in your lifetime?” Moore continued. “I’m not. I’m sorry, but the old guard of the Democratic Party has to go. It has to go.”

“I support (Minnesota Rep.) Keith Ellison as the new DNC chair,” Moore told the feminist crowd. “He is a great organizer and our only Muslim member of Congress.”

Ellison has a consistent 100 percent voting record from both the Planned Parenthood Action Fund and NARAL Pro-Choice America.

Moore specifically told the blue Electoral College areas that went for Hillary Clinton in the election, “You have to form regions of resistance.” He said the early states that legalized abortion before the Roe v. Wade decision helped create “the new normal.”

“For the young people, let me give you a little history lesson,” he said. “Roe v. Wade, that made abortion legal in this country in 1973 did not happen in a vacuum. It did not happen by itself.”

“It happened because our two largest states in 1970 — three years earlier — made abortion legal,” he continued. “New York and California — because abortion was legal in those two large states for three years — they helped to create the new normal.”

“The new normal being a women has a right to control your internal organs and what goes on in there,” Moore said. “It’s not the job of the government.”

Calling upon both U.S. coasts and other blue areas to form areas of resistance, Moore said, “You have to create laws that show the rest of the country what it looks like to have healthcare for all,” along with laws prohibiting employment discrimination against “gays and lesbians and others.”

Moore said as well he would stand non-violently and peacefully between law enforcement and illegal immigrants.

Clinton supporters and others from the left rioted in blue Electoral College areas across the U.S. when she lost the presidency to Trump in November, continuing the violence for several days and then picking back up in Washington, D.C. on inauguration day.

Most of the approximately 230 protesters arrested in Washington on Friday will face felony rioting charges, federal prosecutors say.

Six police officers sustained minor injuries in the anti-Trump protests; three of the officers were hit in the head with flying objects

Interim D.C. police chief Peter Newsham said Friday that 217 in individuals would be charged with rioting.