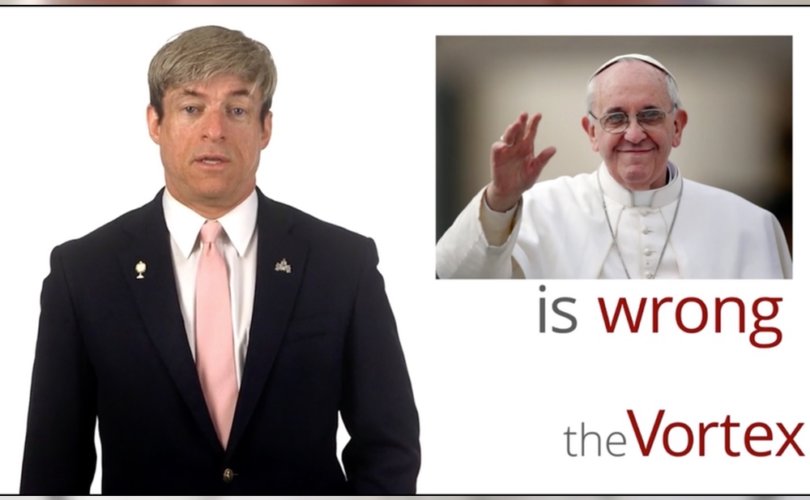 In his May 24 “Vortex” editorial, Voris took aim at remarks attributed to Pope Francis by Juan Carlos Cruz, a victim of the Chilean clergy abuse crisis.

Cruz told reporters last month that during his private papal audience the Pope spoke about homosexuality.

Neither the Vatican nor the Pope has denied Cruz’s account.

Voris emphasized that in making such a comment — if he indeed did make the comment — Francis was speaking not as the Pope but as a man:

“The man who is the current pope is wrong in his very personal, very fallible opinion presented as a mere man, and not as Pope,” Voris said. “God does not make people gay, and such a person is not born that way.”

“Jorge Bergoglio is wrong,” he said.

“If Bergoglio the man — not Francis the Pope — did indeed say that, then the gay-controlled Vatican has a moral duty and obligation to come out and deny either that he said it or that was not what he meant,” the newscaster said.

Voris said that whether or not Pope Francis made the remarks, they suited the agenda of homosexual clerics in Rome, men Voris said “schemed and connived behind the scenes” at the 2014 Extraordinary Synod on the Family to advance a pro-LGBT agenda.

The apologist recalled that he had been at the synod at the time. Midway through the proceedings, a “mid-term relatio” was released to media. Purportedly the work of the assembled bishops, but later described as the work of Archbishop Bruno Forte, the report contained a section entitled “Welcoming homosexual persons.”

It stated “Homosexuals have gifts and qualities to offer to the Christian community”, and asked “Are our communities capable of providing [them with a welcoming home], accepting and valuing their sexual orientation, without compromising Catholic doctrine on the family and matrimony?”

In response, Voris asked “Are the Synod fathers proposing that ‘gifts and qualities’ flow from the sexual orientation of homosexuality?”

“Is the Synod proposing that there is something innate in the homosexual orientation that transcends and uplifts the Catholic Church, the Christian community, and if so, what would those particular gifts be?”

Now, Voris says the men who advanced that agenda “are at it again.”

“The Vatican gays are now at it again,” he said, “riding this latest rainbow wave across every major paper in the world.”

Underscoring that there is no proof the remarks attributed to Francis are authentic, Voris nevertheless observed that that Vatican has not denied them.

“What we do know is this,” Voris said.  “The Vatican has not ‘clarified’ the matter to any substantial degree, and the homoheresy gang in the Vatican is making hay out of the whole affair.”

Voris said that to suggest that God deliberately makes people gay is “malicious.”

“For someone, regardless of who the man is, to even suggest that Almighty God actively creates, deliberately brings into existence a disordered sexuality is reprehensible. Then… to suggest, or leave open to easy interpretation, that the Almighty likes it or loves the disorder is downright malicious.”

Voris, who has publicly repented of his own past as a sexually active homosexual man, stated firmly that God does not make anyone gay.

“They are traumatized into it, raped into it, abused emotionally into it, deprived-of-an-authentic-masculine-presence into it and even coached into it by predatory men — some of whom are priests.”

The outspoken newscaster reflected on his past way of life.

“I'd like the man who is currently pope to look me in the eye and tell me God made me the way I used to live and therefore intends me to be that way and God was happy with it and would have no problem with me returning to it, because after all, He made me that way,” Voris said.  “So therefore that would be HIS WILL, which is the extension of that thought… You can imagine what my answer back would be.”