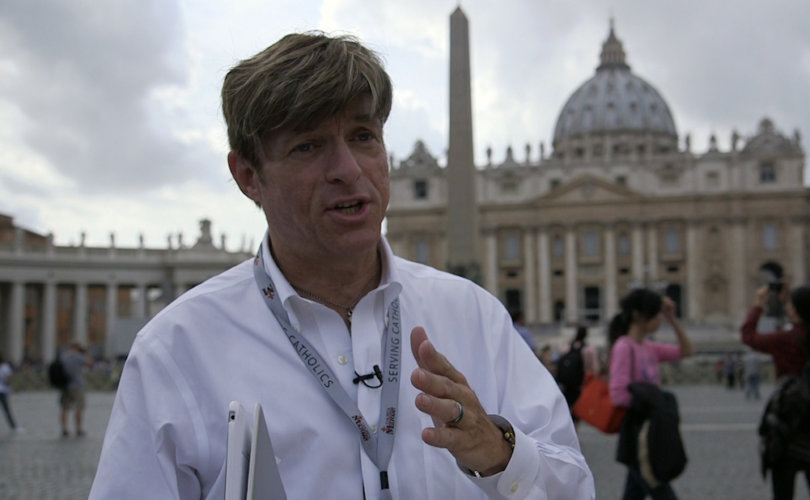 April 22, 2016 (LifeSiteNews) – Catholic internet evangelist Michael Voris, the founder of Church Militant and known worldwide for his famous show The Vortex, “where lies and falsehoods are trapped and exposed,” has revealed for the first time that he was actively involved in homosexuality “over a prolonged period of time.”

The internet sensation who has been zealous in exposing error and falsehood even where bishops are concerned, has long admitted he was a revert from a sinful sexual lifestyle, but never before revealed its specific nature.

“I have said many times — in public — that I was in a state of mortal sin, and had I died, I would have been damned,” said Voris in a Vortex episode released Thursday.  “I will now reveal that for most of my years in my thirties, confused about my own sexuality, I lived a life of live-in relationships with homosexual men,” he said. Voris stressed that those grave sins took place before his “reversion to the Faith.”

“Since my reversion, I abhor all these sins, especially in the world of the many, many other sins I have committed having nothing to do with sexuality,” added Voris.

Voris said he decided to reveal the details of his past on the basis of his receipt of information suggesting that “the New York archdiocese is collecting and preparing to quietly filter out details of my past life with the aim of publicly discrediting me, this apostolate and the work here.” But beyond that impetus, Voris says he regrets not revealing the nature of his sins before because it was “limiting God” and perhaps not letting his example inspire others in homosexual lifestyles to turn to God for help.

“From the time of my return to the Faith, I have wanted nothing than for others to experience the joy and life-giving truth of the Catholic Church,” said Voris, “to know that the dead can be raised, to deeply consider what is truly meant by ‘With God all things are possible.’”

“He can even restore your formerly shattered, confused sexuality,” added Voris. “It does not matter — whatever the issue, whatever the sin, whatever the depth of the deepest darkness, there is nowhere God can not come to you and rescue you.”

During the Vortex special, the founder of Church Militant apologizes to “anyone who is wounded” by the revelations, noting that he “did not intend to deceive” but only “didn't see the need to provide up-close detail of past sins.”

While he says he does not know what ramifications to his apostolate will come of the revelation, he prays only that “the will of God be done.” Concluding, he says: “We will never cease declaring these truths, the glories of the Catholic faith, regardless of what happens.”