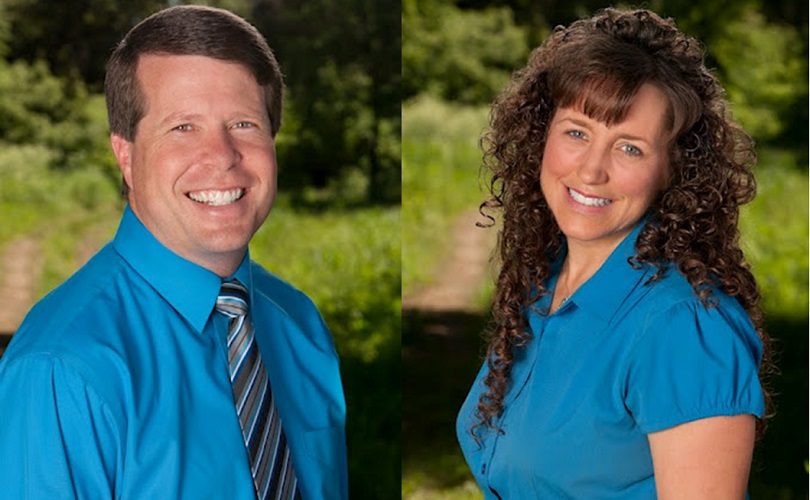 Duggar, who has nine daughters of her own, asked, “Parents, who do you want undressing next to your daughter at the public swimming pool’s private changing area?”

Michelle Duggar, the star of TLC's 19 Kids and Counting, recorded a message urging citizens in her hometown to oppose a new transgender “anti-discrimination” ordinance that would allow biological males to use the restrooms, public showers, and changing rooms of the opposite sex.

“I don’t believe the citizens of Fayetteville would want males with past child predator convictions that claim they are female to have a legal right to enter private areas that are reserved for women and girls,” she said in a robocall sponsored by Free Fayetteville that went out on Monday. “We should never place the preference of an adult over the safety and innocence of a child.”

Duggar, who has nine daughters of her own, closed by asking, “Parents, who do you want undressing next to your daughter at the public swimming pool’s private changing area?”

Despite her warnings, and a massive backlash of public opposition, city council passed the ordinance at 3:20 this morning, by a 6-2 vote. Aldermen Martin Schoppmeyer and Justin Tennant voted no.

The original version of the ordinance would have made it illegal for any business to post any message that would make a homosexual or transgender person feel unwelcome.

Proponents of the final ordinance insist objections that men could enter women's facilities to assault or rape women are baseless. City Attorney Kit Williams called the notion “nothing more than fear-mongering.”

Alderman Matthew Petty accused opponents of “spreading this misinformation,” because the Duggars “are skilled political strategists and they believe it is an effective proxy for their bigotry.” And GLAAD (Gay and Lesbian Alliance Against Defamation) media strategist Alexandra Bolles called Duggar's statement a “bizarre mental leap” that shows “her fascination with the false idea that LGBT adults are preditory [sic].”

However, experience has shown that pro-family advocates' concerns are not baseless.

In February, a judge “indefinitely” jailed 37-year-old Christopher Hambrook after he posed as a transgender woman so he could sexually assault women at two women's shelters in Toronto. Hambrook had served time for molesting a five-year-old girl and then raping a mentally challenged woman before moving to Toronto and changing his name to “Jessica.”

Allowing men with male genitalia to share female spaces has been a problem in the United States, as well. Evergreen State College defended the right of a 45-year-old biological male, who calls himself “Colleen Francis,” to lounge naked in a women's locker room that is used by girls as young as six.

Meanwhile, New York City guidelines ask school officials to make an “accommodation” to allow teens who claim to be transgender to sleep in the bedrooms of the opposite sex during “overnight field trips.”

Fayetteville City Attorney Williams' memo held that transgender people's ability to use the restroom of their choice trumped parental concerns, as transgender people “are far more likely to be the victims of harassment and violence if forced to use a bathroom that is inconsistent with their gender identity or expression.” He added, “denying that to a person is inhumane.”

Fayetteville citizens said the ordinance – which creates a Civil Rights Administrator to field complaints of “discrimination” – would deny business owners the right to exercise their religious beliefs in the public square.

“Businesses and people of faith still face the threat of criminal prosecution under this ordinance,” said Jerry Cox of the Arkansas Family Council, which performed a complete analysis of the measure's shortcomings.

However, Councilmember Sarah Marsh greeted objections by concerned parents and religious leaders at Tuesday night's meeting by saying she was “ashamed there is so much darkness in the heart of this community.”

For his part, Cox vowed that the issue was far from settled. “Some Fayetteville residents are going to try to repeal the ordinance, and others will want to file a lawsuit to clarify its constitutionality,” he said. “One thing is certain: This fight is far from over.”

The full text of Michelle Duggar's message is as follows:

Hello, this is Michelle Duggar. I’m calling to inform you of some shocking news that would affect the safety of northwest Arkansas women and children. The Fayetteville City Council is voting on an ordinance this Tuesday night that would allow men – yes, I said men – to use women's and girls' restrooms, locker rooms, showers, sleeping areas and other areas that are designated for females only.

I don’t believe the citizens of Fayetteville would want males with past child predator convictions that claim they are female to have a legal right to enter private areas that are reserved for women and girls. I doubt that Fayetteville parents would stand for a law that would endanger their daughters or allow them to be traumatized by a man joining them in their private space.

We should never place the preference of an adult over the safety and innocence of a child. Parents, who do you want undressing next to your daughter at the public swimming pool’s private changing area?